Wordplay: U-turns in honor of the King

The bloke had swagger, a diamond stud. He wore a floppy homburg, an opal brooch, his voice the match of P.T. Barnum's baritone pledging miracles before a circus tent. Though 100 years back, King O'Malley had different visions to flog.

One was a federal bank for Australia – his rhetoric part of the push for the CBA we know today. Another was prohibition – banning the "stagger juice" that hampered civic progress. (At least he got one wish.) A third endeavour was ditching the u in words like endeavour and humour, despite both abstracts being core Australian virtues. 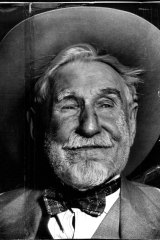 “Honor color and vigor!” he argued. O'Malley loathed the Normans for bestowing the redundant vowel in the first place. Oust it, I say! That's how he spoke. His manner belonged to a populist born before his era, a revivalist tub-thumper from Kansas. Or Quebec, depending which CV he offered.

O'Malley's birthdate is a further toss-up – 1858 or 1854? July 2 or July 4? His monarchic name salutes his mother's maiden name, allegedly, while his education – perhaps in Pawnee County – was at least one R short of three.

Even his reasons for turning up in Sydney – or Port Alma in Rockhampton – were open to debate, ranging from tuberculosis to murmurs of embezzlement. Whichever you preferred, the new arrival warmed to the limelight, schmoozing up the public ladder to become Minister for Home Affairs in Andrew Fisher's cabinet in 1910.

Installed, the King gave the nod to Walter Burley Griffin, a fellow North American, to adorn a vast sheep paddock with byzantine roundabouts. Curiously, the member's other legacy is that missing u in the Labor Party. With signature gusto, O'Malley convinced the caucus that US spelling was a sign of "moving forward".

Rumbles across the press echoed the upstart's message. In 1899, a pamphleteer named E.J. Forbes claimed glamor and catalog were ink-savingly logical, a moral necessity. Though closer scrutiny unmasked Forbes as distributor of Webster's Dictionary in Australia, adding a dubious odour (sic) to his argument.

Nonetheless, the phonetic putsch of Noah Webster himself, the lexicographer to banish gaol from American sentences, held real sway in the minds of King O'Malley and many Australians. A reader called Marcia, delving Trove for her own project, found neighbor and behaviour running amok in articles predating federation. “When or why did this shift occur?” she asked.

A new century, a new constitution, a yen for fresh identity – all these factors played a role, as did King O'Malley and those ulterior pamphlets. Sources like the Hobart Mercury, the Perth Gazette, the Hawkesbury Courier leapt aboard the bandwagon. Which invites the next question: when did US habit desist?

Alison Moore, editor of the Macquarie Dictionary, described how the house's 1989 pocket edition promoted behavior over the u-version, only to reverse the sequence for the 1998 version, and beyond. Also in the 1980s, as previous editor Sue Butler noted, the Victorian Education Department accepted many "Websterized" words, in tandem with The Age, where a disorganized massage parlor wasn't out of place.

Roaming the landscape now, you may encounter wartime honor rolls, including the marble plaque in Victor Harbor – or Adelaide's Outer Harbor. Just as movie theatres maintain Uncle Sam's bias, our screens a procession of Center Stage, Mr Mom, Analyze That and American Splendor.

Roll it forward, and spellchecking software is not just forgiving a texter's "theater" – as my last paragraph taught me – but insisting on the default as if we'd never realized O'Malley's dream like the future-hungry Laborites that encircled him. The King himself lived until he was 99, doffing his final homburg in 1953, too soon for the teetotaller to glean that King O'Malley's Irish Pub, in bustling Canberra, is an irony dubbed in his honor.