You Know About King Lear. A New Novel Tells His Banished Queen’s Tale. 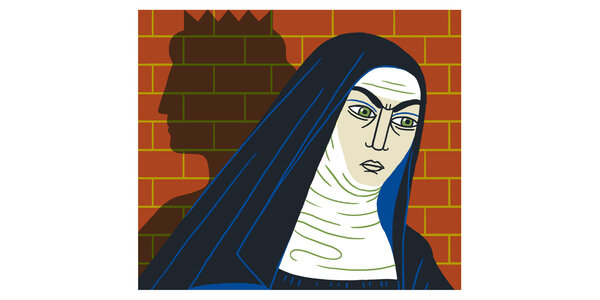 Perhaps you know the story of “King Lear.”

The old king, on the verge of madness, decides to split his kingdom among his three daughters, giving the largest share to the daughter who most obsequiously declares her love for him. His youngest, Cordelia, refuses to participate in the absurd affair. What ensues is a tragedy of almost comic proportions in which nearly everybody dies.

Missing almost entirely is the mother of King Lear’s children, the queen.

It’s the queen’s tale that the librettist J. R. Thorp tells with her debut novel, “Learwife.” In luscious prose, Thorp explores the nameless queen’s untold story, one that — in keeping with the spirit of Shakespeare’s original — is rife with cruelty, betrayal and passion. Thorp’s queen has been sequestered in a remote abbey for 15 years, after Lear banished her following Cordelia’s birth. Queen (as she is called by all) is never told why she is exiled, and she has stewed over this punishment, letting her rage fester.

When Queen receives the news that her husband and three children are dead, the cold, aloof shell she has hidden within for over a decade cracks. Out spills a power-hungry, resentful, desperate version of her pre-exile self, one who we learn was bent on accruing authority. By day at the abbey, Queen gleefully creates interpersonal drama among the nuns while catastrophe strikes — a deadly contagion forces the abbey into quarantine. By night, she’s haunted by her memories of her marriage to Lear and her troubled relationships with her elder daughters, Regan and Goneril. As she inches closer to the truth of why she was exiled, so too does she approach the same madness that overtook Lear and Lear’s father, as well as Queen’s first husband, an uncaring king obsessed with religion.

“Learwife” is gorgeously written, its language ornate and heady. Remembering the gossip of the court, Queen says: “I forget: I am not real, I am bound into a thousand songs, I am four parts legend to one part solid stone. This the fate of queens.” Thorp carefully embeds clues to Queen’s banishment within her alarming memories of her children. Regan and Goneril are unrepentant villains in the original “Lear” — heartless, greedy, lustful — but Thorp poignantly illustrates how their eventual corruption stems from the treatment they received from their self-absorbed mother, whose ability to love her daughters was complicated by her fetish for power. Thorp doesn’t abandon the theme of greed in Shakespeare’s play, but she does flesh it out to reveal how desperate the women in “King Lear” would have been for any scrap of agency in their lives. The novel’s scenes with Queen and her daughters are its most affecting; I wish Thorp had given us more.

Instead, most of the story takes place in the abbey, where Queen descends into grief, becoming increasingly mired in memory as she skirts feelings of regret for her harsh treatment of her children. Though Thorp ratchets up the tension three-quarters of the way through, readers would have been better served if she had inserted more suspense among the stunning early descriptions of life at the abbey. Thorp applies subtle pressure when what the story needed, at times, was a firm shove.

But the novel’s crest and denouement are artful and moving. “One survives. Women find small spaces, bury themselves, show green when the season betters,” Queen muses early in the book. Though her survival is not what she had envisioned, it’s a beautiful triumph nonetheless.