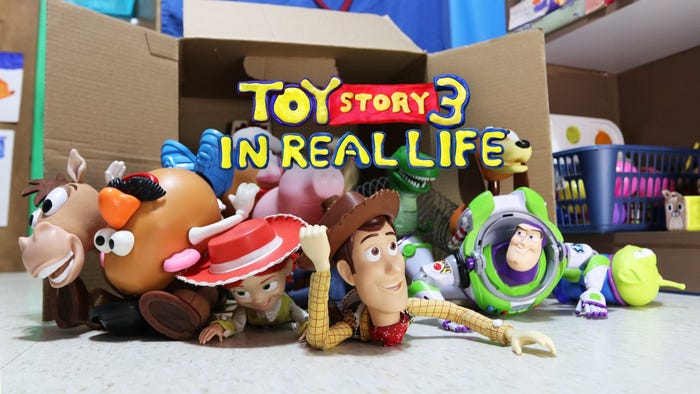 Morgan and Mason McGrew are two brothers from Iowa who saw "Toy Story 3" and were so inspired, they decided to recreate the film using stop-motion.

All they needed to create their film, "Toy Story 3 In Real Life," was an iPhone, some video editing software, and of course, Woody, Buzz, and the rest of the gang.

Although the brothers loved the film from the get-go when it came out in 2010, the decision to actually recreate it didn't happen until much later. Morgan, 24, told Insider it was something that happened gradually. Like most fans, they started by buying "Toy Story" merchandise.

"We got those [toys] back in the day and kind of experimented with them in terms of video making, and I think just more and more, it kind of led up to a point where we started doing scenes and then it built into the final product," Morgan told Insider.

When "Toy Story 3" first came out Mason, 22, was only 11 years old, so for him, recreating anything was far from his mind. Just like his brother, it was gradual.

"I really didn't say 'oh well I want to make something like that' but deep down and as years went on, I realized that wow — this is a great film and someday I want to make stuff like this,'" he said.

In 2011, the siblings started experimenting with puppetry and stop-motion. A recent video on their YouTube channel shows seven minutes of scrapped footage from their earlier work on the project.

To create the film, they used an iPhone app called Stop Motion Studio Pro and would then edit the footage on Final Cut Pro.

Reflecting on the process, Morgan recalled the number of hours it would take to film certain shots. On average, it can take anywhere between three or four hours to film a two-second shot.

"Sometimes it could take longer, I think the longest was nine hours for me. I think that's the longest I spent in one session without doing anything else … like maybe for a two or three-minute chunk you would take a month and a half to edit it," he said.

Overall, the project took eight years to complete. "But it wasn't a constant thing," said Morgan. The brothers are both in their early twenties and have juggled school, internships, and other projects during filming for "Toy Story 3 In Real Life."

Mason works as a senior visual media producer for a marketing firm, while Morgan is a freelance video producer.

Although they had other things going on, it was important for the brothers to see the project through. "We wanted to finalize what we envisioned at the beginning," Morgan said.

Creating the film was very much a family affair. Their cousin played Andy's mom, Mason's friend played Bonny, and some family friends also made cameos along the way, while Morgan himself played Andy.

Their father is an engineer and was integral in helping to build many of the sets for the film. "That was a lot of fun getting to do that and a lot of it turned out really well too," said Morgan.

The siblings decided in 2019 that it was time to draw filming to an end and release it. Originally, they were planning a release on September 24, 2019, but they thought the film could do with some perfecting to make sure everything matched up correctly.

They released the film in January 2020, but people didn't get to enjoy it right away as it was blocked for copyright reasons.

"We were expecting that because it is using a good deal of copyrighted material. So we submitted an appeal stating that we're not looking to make any money off of this and it's here as a tribute, and as a creative work," Morgan said. A month passed and the claim was dropped by Disney.

The reaction to the film, which currently has more than 11 million views on YouTube, has been outstandingly positive. Morgan and Mason have had many people reach out to congratulate them, recalling happy childhood memories of the film.

Lee Unkrich, the director of "Toy Story 3" even reached out and told the brothers he didn't know if their film was "brilliant or insane."

They were doing homework when they found out that Pete Docter, one of the writers of "Toy Story" had been shown a clip of their film while on the red carpet for the Pixar film "Onward," which Morgan described as "pretty awesome."

"Toy Story" is still very much a part of their lives. Mason's room remains an ode to Andy's bedroom with its baby blue, yellow-starred wallpaper. They also still own much of the memorabilia they collected over the years.

"'Toy Story' has always been there in our lives, and I don't think there will be a time where it ever won't be," Mason reflected.

For Morgan and Mason, the project was about getting something done and having a dream come to fruition. It was important to them to let people know, through the film, that anything is possible.