“90 Day Fiance” is one of the most popular shows on the TLC network today. On Sunday nights, fans all over the world tune in to see the trials and travails of seemingly mismatched, star-crossed lovers from vastly different parts of the world.  Some couples — like Angela and Michael, from rural Georgia and Nigeria respectively — have become fan favorites, no matter how arguably problematic their relationship may be. Other couples, however, are openly abhorred by the “fan-mily,” as fans of “90 Day Fiance” call themselves.

One of the least favorite couples on “90 Day Fiance” is Leida and Eric, who hail from Indonesia and Wisconsin, respectively. According to In Touch Weekly, although the couple recently bought a house together, they came under a lot of fire from the fans when they evicted Eric’s daughter, Tausha, out of the apartment she’d lived in before her father and stepmother got married.

But Leida and Eric didn’t win the title of least favorite “90 Day Fiance” couple — that unfortunate honor goes to Jorge and Anfisa, who first debuted on Season 4 of the flagship franchise. Keep reading to find out the percent of people who voted for the pair, as well as what other couples made the list.

Jorge and Anfisa brought the drama 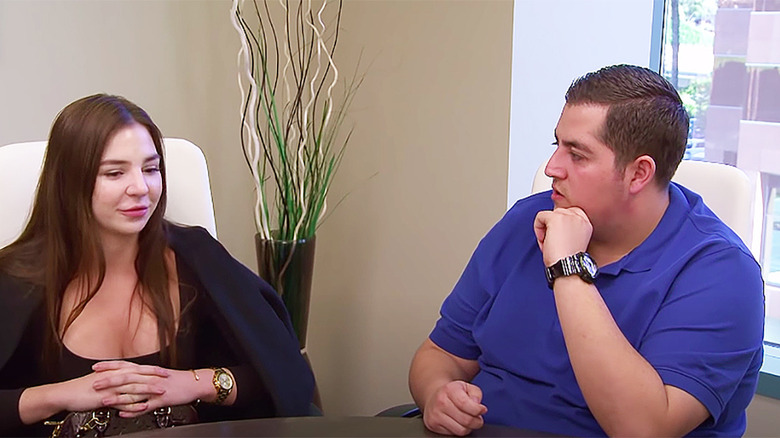 Nicki Swift surveyed 605 fans of “90 Day Fiance” to determine their least favorite couple of the series. Jorge and Anfisa earned more than 32% of all polled, and perhaps it’s due to the now-divorced couple’s drama. Anfisa reportedly split from Jorge two months into his prison sentence for possession of drugs with the intention to sell, and today, Jorge is married to someone else and even has a baby with his new wife.

However, Anfisa hasn’t been able to escape claims that she supposedly is to blame for Jorge’s downfall, telling one fan, according to In Touch Weekly, “Dude, my ex was in prison twice before. How can you explain this?” She continued, “dEsTrOyEd hIs LiFe my a**. Boo-f***ing-hoo. Everyone is responsible for their own life choices.”

Ed and Rose, a couple who appeared on “90 Day Fiance: Before the 90 Days” came in second place as the least favorite couple from the show with 23%, which isn’t so surprising, as “Big Ed” faced criticism throughout the show’s airing for alleged sexual assault and harassment. Darcey and Jesse, and Angela and Michael, rounded out the list of least favorite “90 Day Fiance” couples with 22% and 21%, respectively. As the saying goes, you can’t win ’em all!