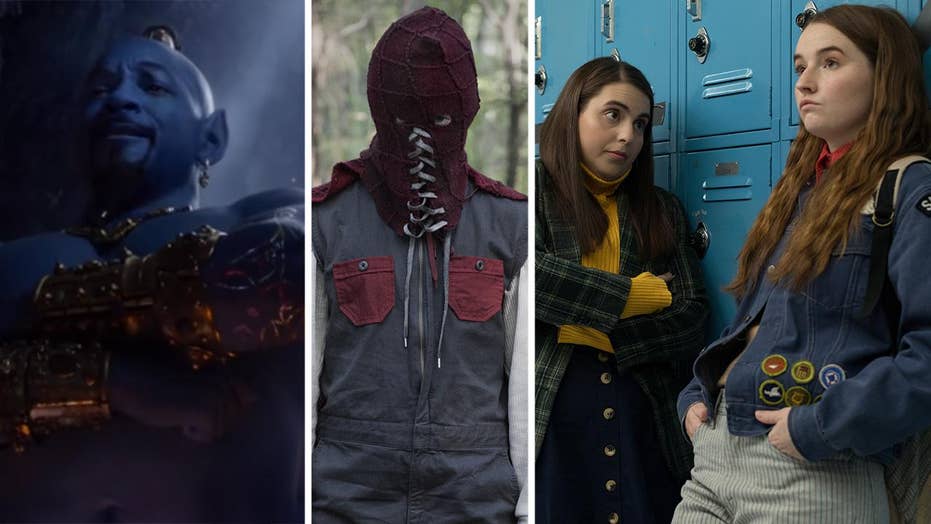 Moviegoers voted with their dollars and chose the familiar over the new this Memorial Day weekend. The Walt Disney Co.'s live-action remake of "Aladdin" crushed the competition at the box office, which included two new original R-rated films that opened as counterprogramming to the family pic: The critically acclaimed teen comedy "Booksmart" and the horror "Brightburn."

But the strategy didn't quite work. "Aladdin" did better than expected, grossing an estimated $86.1 million to take the top spot at the North American box office, according to studio estimates on Sunday. It'll likely pass $100 million by Monday. The others didn't even break $10 million.

"Aladdin," a musical-adventure directed by Guy Ritchie, stars Will Smith, Mena Massoud and Naomi Scott and draws heavily on the music and story of the 1992 animated film (the top earner of that year) that it's based on.

"We're delighted," said Cathleen Taff, Disney's president of theatrical distribution. "Between the fun action-adventure and spectacular music combined with the cast, which is so charming and has such great chemistry together, we've hit something that fans are embracing and walking out of wanting to share with others."

Audiences, who were 54 percent women and 51 percent families, gave the remake an A CinemaScore, which is much more promising for its continued success than the tepid critical reviews. The studio also got another metric with the newly launched verified Rotten Tomatoes audience rating. Over 7,000 people rated the film to give it a 93 percent. 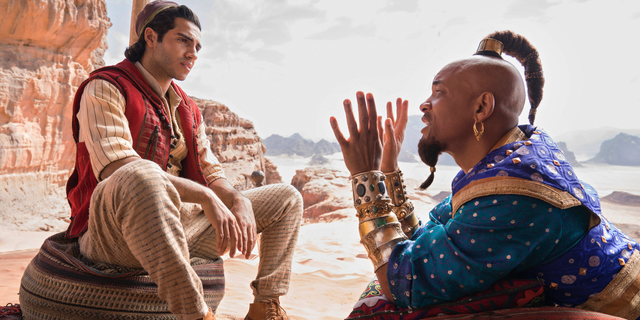 This image released by Disney shows Mena Massoud as Aladdin, left, and Will Smith as Genie in Disney’s live-action adaptation of the 1992 animated classic "Aladdin."
(AP)

"I'm so pleased that Rotten Tomatoes launched this, it means people bought the ticket. You can trust that people giving you the score actually sat through the movie," Taff said. "We couldn't ask for a better barometer of fan reception."

With an international gross of $121 million, "Aladdin" has already earned over $207 million globally. It cost a reported $183 million to produce.

A surprise for many, however, was "Booksmart," an Annapurna film distributed by United Artists Releasing, which debuted in sixth with only $6.5 million, despite excellent reviews and steady buzz from its SXSW film festival debut. Although in line with studio expectations going into the weekend, some had thought that this would be a summer breakout hit.

Olivia Wilde directed the film that stars Kaitlyn Dever and Beanie Feldstein as two teenage overachievers and rule-followers who decide to go to a party on their last night of high school. Many compared it to "Superbad," which opened in August 2007 to $33 million.

But despite all the hype, including a lot of celebrity endorsements on social media from the likes of Natalie Portman and Ryan Reynolds, audiences just didn't turn out for "Booksmart" in noteworthy numbers.

Wilde saw the writing on the wall Saturday and tried to change the course with a Twitter plea.

"Anyone out there saving @Booksmart for another day, consider making that day TODAY," Wilde wrote. "We are getting creamed by the big dogs out there and need your support. Don't give studios an excuse not to green-light movies made by and about women."

Those who did make to "Booksmart" were mostly women (61 percent) and under the age of 35 (74 percent). And the target 17-34 age group gave a more favorable exit score (an A) than audiences overall, who gave it a B+.

"People are in a popcorn mood," Comscore senior media analyst Paul Dergarabedian said. "Films trying to be more introspective and fresh are having a tougher time getting their head above water."

Still, he noted, to have three R-rated films in the top 6 ("Brightburn," ''Booksmart" and "John Wick: Chapter 3") is impressive. And one limited release that did manage to connect was the Laurel Canyon music documentary "Echo in the Canyon," which earned an impressive $103,716 from two locations in Los Angeles. It expands to New York next week.

The deficit is still running around 9 percent for the year, but next weekend could chip away at that with a diverse set of new offerings including the Elton John biopic "Rocketman," ''Godzilla: King of the Monsters" and the Octavia Spencer thriller "Ma."