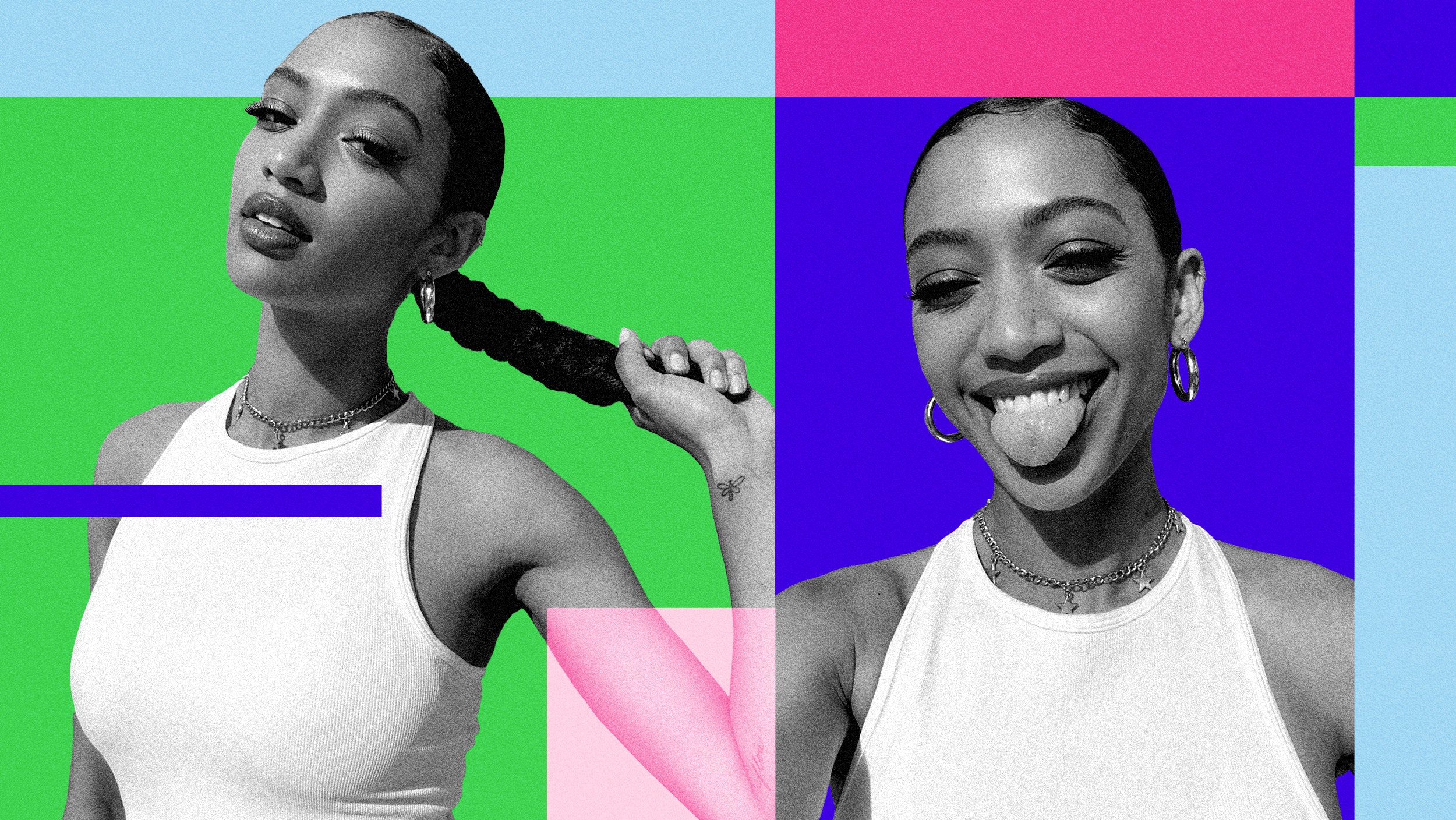 When it comes to onscreen "will they or won’t they" couples, it’s hard to find a pair viewers are cheering on as fiercely as Spencer James and Olivia Baker on All-American. It’s not just fans either; All-American star Samantha Logan happens to ship her character Olivia with Spencer as well. "I am so rooting for Olivia and Spencer," Logan tells Elite Daily. "From the first season, their connection has been really strong. I would love to have a chance to see them explore [a] relationship together." But it’s not just Olivia’s love life that resonates with Logan.

The 24-year-old actor has portrayed Olivia for three seasons and counting on The CW’s hit series, and in that time she’s learned invaluable lessons from her character. "[Olivia’s] very giving," Logan explains. "Like Olivia, I tend to give too much of myself. Personally, I’m learning to harness my energy a little bit more and be very selective in where I give that energy."

Logan seems to be on the right track with that goal. When she’s not playing Olivia onscreen, she’s working on experiencing everything life has to offer. Her Instagram serves as a way for her to document this journey. Below, she talks about three incredibly special moments she shared on social — and all the backstory you don’t get to see from a simple glance at her grid.

This interview has been edited and condensed for clarity.

Living It Up In London

Elite Daily: Where and when was this photo taken?

Samantha Logan: This was taken in London at a nightclub called The Box on New Year’s 2020. My friend Asjha Cooper, who plays Kia on All-American, and I were like, "Screw it, let’s just go to London." She’s very spontaneous like me in that way. It’s funny because my [Instagram] caption [for this photo] says, "Hope the New Year has been treating you well." False advertising. None of us really knew what was coming.

ED: What’s the most memorable thing that happened on this night?

SL: You’re not allowed to take any pictures or videos [in this club]. Like, there are performances and things happening in there that I have never before [seen] in my life. I was a whole new woman when I left that club. It was one of the best nights of my life. And I’m so glad that was one of my last big nights out before all of this chaos.

So, I wasn’t supposed to take this photo. Right after the flash went off, a security guard came down. They might have had me delete it [if they saw me, but] I went on to post it. I didn’t tag the actual club; I just tagged London and I was like, "Hopefully no one finds it," because it’s a bomb photo.

ED: Tell me about your outfit.

SL: I was playing with patterns this night, which I never do. I just threw it all together. These pants were gifted to me from Princess Polly, and I had just purchased that Aritzia jacket, which I’m obsessed with. I packed a couple outfits for the trip because we were only there for a week and it worked perfectly.

ED: How were you feeling when you took this photo?

SL: I was feeling great. You can kind of see the dewiness on my cheek a little bit — that’s not just highlighter. That’s like a mix of highlighter and a lot of sweat. Your girl was dancing, she was busting it down. I’m a big advocate for that. If I’m going to go out, I’m going to have a good ass time. I’m full sending it. None of that standing around, not knowing what I’m doing. I’m on the dance floor with my girlfriends. I was very sore the next day, though.

ED: I was going to say, this photo shows your flexibility!

SL: I was a dancer up until I was 14 or 15, so there’s still a little bit of muscle memory there. Now, without the pressure of it being a career and the competitiveness of it all, I’m able to just dance for fun. On bad days especially, there’s nothing that can get me in a better mood than a solo dance party. 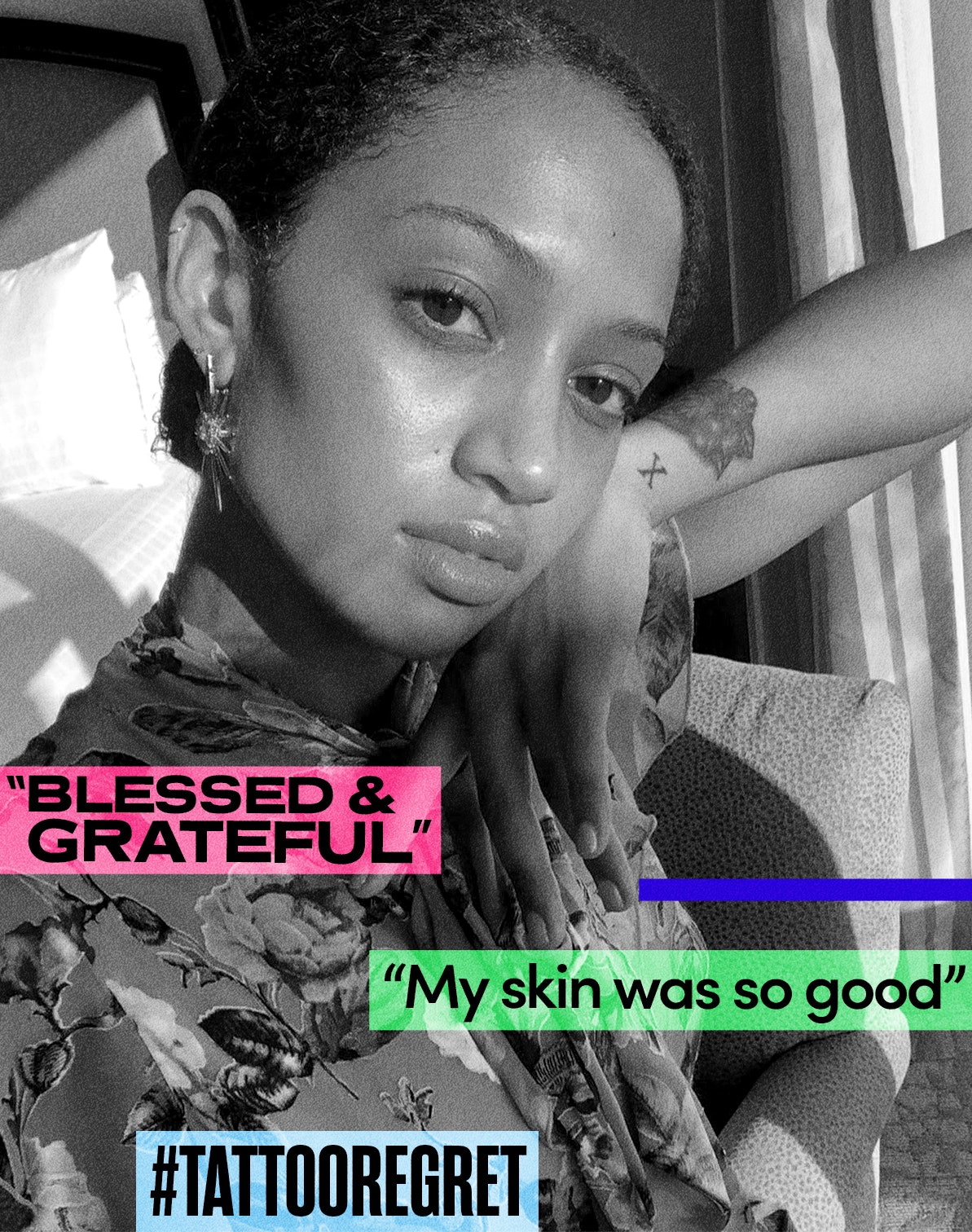 ED: Where and when was this photo taken?

SL: This was a couple of years ago at a really nice hotel — I think it was the Beverly Hills Hotel — and we were doing press for [All-American]. This dress is by Alice and Olivia, and I was obsessed with it. I think I just put a little bit of concealer under my eyes, some Chapstick, and some blush and that was it. My skin was so good. I miss that beautiful Black skin.

ED: A few tattoos are visible on your wrist in this picture. Can you tell me about them?

SL: The Roman numeral "X" I got for my birthday a couple of years ago with my ex, and then the flower I got in Hawaii with my mom. We had a very rough, choppy ride on what was supposed to be a relaxing sunset cruise. At the time it was very scary, so when we got back to the dock my mom and I were like, "We need to remember this." So we found this tattoo shop that was open late and we got similar tattoos. They’re not exactly what we wanted and we both regret them. But like, to laser it off is so expensive, so it’s there for the time being. And now mine’s a part of Olivia Baker as well, because I get to [have visible tattoos] in the show.

ED: Do you have any other tattoos?

SL: I have seven tattoos. My first tattoo I ever got — when I was 18 — is my mom’s tattoo. It’s on my ankle and it’s [a picture] of the world and below it says “peace,” so “world peace.” But the continents are, like, all f*cked up, so it’s like these are not real continents at all. But I kind of love it because my mom and her best friend of 20 years, when they went to get these tattoos, they roughly drew them on a napkin after a night out. So it’s definitely not perfect, but I kind of love it that way.

ED: What’s your favorite thing about this photo?

SL: It just reminds me how truly blessed and grateful I am to be living this really cool life. I’m wearing this beautiful dress, my skin is glowing, and I’m about to do press for this show I’m extremely lucky and proud to be on. I always dreamt big when I was a kid, but to really look around and see all I’ve accomplished, I’m like, "Look how far I’ve come." 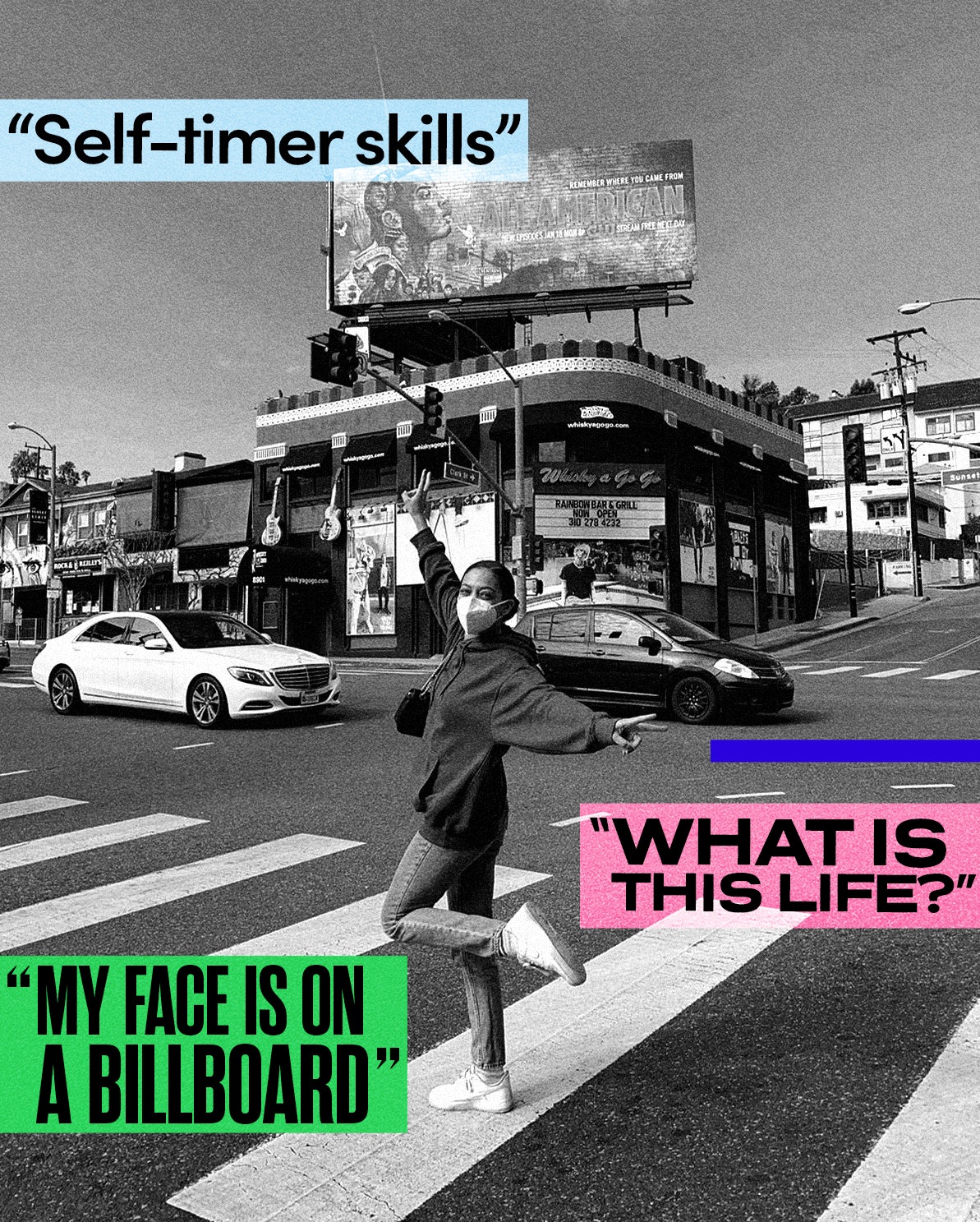 ED: Where and when was this photo taken?

SL: I think I took this on Feb. 2. This was maybe a week after I had recovered from COVID, and I was like, "You know what? This is really cool. My face is on a billboard on Sunset Boulevard!" You can’t really see me smiling because of the mask, but you can see my eyes — I was beaming. I was just so happy it was there. This was the only picture I took. I set the self-timer up on a crosswalk sign, and it was perfect the first time.

ED: In your Instagram caption of this photo, you mention that "depression is a b*tch." Why do you think it’s important to be open about your mental health?

SL: I’ve dealt with depression for the majority of my life. When I was younger, I didn’t have knowledge about how to cope. Now I have more tools. When I’m in those really, really low places, I like to take a break from social media because it’s definitely not good for my mental health. At the end of the day, your mental health is the most important thing. I want to be transparent about that on social media, so I wanted to throw that little bit in there like, "This is what I’ve been dealing with, but this is also a really big highlight for me, going out and seeing this billboard." For me, it was kind of an all-in-one photo.

SL: I actively made the choice to wear the mask in this because it sends a message to people that we’re still in the middle of a pandemic. I wear a mask whenever I go out because it’s one very small thing that can have a very large effect on people. Also, it’s history. I’m going to look back [on this photo] and be like, "Wow, the first time my face was on a billboard in Season 3 of a show I was on, I had to wear a mask because we were in the middle of a pandemic." Wild. What is this life? It’s so weird!

In Elite Daily’s I Can Explain… series, we’re asking celebrities to revisit their most memorable photos and tell us what really went down behind the scenes. Read more here.