Cattle queen Gina cooks up nostalgic fare with all the trimmings

PS has been given a rare and intimate glimpse into the private world of Australia's second richest person, mining mogul and beef queen Gina Rinehart, courtesy of her very first cook book. 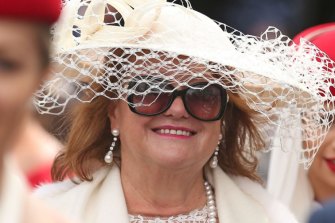 Beef Queen Gina Rinehart is about to share some of her most precious family recipes.Credit:Scott Barbour

The Things We Love will be officially launched in Sydney in just over a week by Rinehart's old pal Alan Jones, and features a collection of recipes and stories from the vast Hancock and Kidman Pastoral Properties' portfolio which ranks as one of the world's largest producers of prime beef.

Rinehart takes her readers on a nostalgic journey with her accounts of growing up on a remote outback cattle station with father Lang Hancock and her beloved mother Hope. 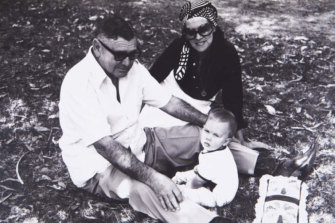 John Hancock with his grandfather Lang and grandmother Hope in Perth 1977.

"My beautiful Mother cooked in un-air conditioned kitchens on our stations, Mulga then Hamersley, which was like a furnace when the wood oven was cooking. The kitchen was tiny at Mulga, with a very low ceiling, and my mother would have to lower her head to get into the kitchen," she reflects, though such hardships did have their advantages.

"Her roast beef recipe, was one well immersed in beef fat dripping. But, absolutely delicious, and so were the tender roast vegetables, totally immersed in that dripping, and, best I’ve tasted," she writes.

But it is Gina's family Christmas traditions which really warmed PS's cockles.

Rinehart reveals that despite the searing December heat, she relishes all the traditions of a  European Christmas, from the stuffed turkey (her's takes 12 hours!) to a rather boozy plum pudding.

"The night before Christmas has always been a lovely time and lovely to read ‘Twas the night before Christmas," Rinehart enthuses.
"I especially like the Aussie version, with its more outback focus. We like to read this around the dining table, as children get older, a verse or two each.
"Given the heat on Christmas Day, our tradition over many years has been to enjoy our turkey with its trimmings, on Christmas Eve. Every year we place our hot turkey on the same beautiful lidded turkey plate my mother and her family had used for decades before.

"And what a lovely lead up to Chrissie day, with the turkey aroma floating around the home.
Of course, other lead ups too, pressies wrapped, stockings hung, fireplace snacks for Father Christmas, and we have on good advice, shortbread biccies are very welcome, especially the ones from my long term friend Bev’s recipe!

"Chrissie cards on display. We hang our cards on strings over the fireplace. And Chrissie tree beautifully decorated, with irreplaceable old decorations treasured by family and handmade ones too.

"My mother always placed our tree with Chrissie lights near the window, so we could see as we approached home. I loved walking down our driveway with my mother and father, looking at our Chrissie tree through the window. Sometimes dad and I would have races back to the house.''

Rinehart writes that she was very fortunate with their Christmases and that her mother instilled in her a love of Christmas time.

''We would polish her silver together, enjoying this special time together, loved silver items
handed down from her parents, getting them ready for Christmas, another lovely tradition I continued with my children."

Rinehart has added a few of her own traditions to Christmas. 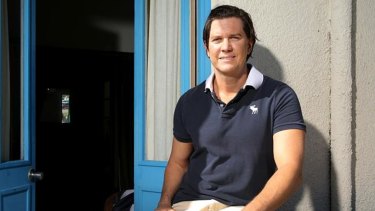 "My mother played the piano very beautifully, for decades since her very sad loss, John has played Christmas carols on our piano for us on her birthday," she reveals, though it is not clear if the John she is referring to is her eldest and only son John Hancock, with whom she has been embroiled in a bitter and very public legal war over the family's billions for many years.

Rinehart's Christmas tree lighting "ceremony" sounds like quite a production.

"For the tree lighting ceremony, as my daughters, and god daughters, walk towards the Chrissie tree, for the smallest to be lifted up to place the angel on top, with the tree then bursting into light, I especially love, Oh Holy Night to accompany. This beautiful carol is one of my favourites. John kindly visits again on Chrissie eve too, to play carols on our piano for us and to join us for our Chrissie Eve turkey and plum pudding!"

After dinner the Rineharts gather around the Christmas tree "with loved ones and chocolate coated almonds, and excellent chocolate rum balls, and homemade shortbread, leaving some for Father Christmas near the chimney" only to get up and do it all over again on Christmas Day.

Rinehart adds that most of Christmas day is spent in the pool with ice creams and then later, gathered around the tree with champagne and "Chrissie cracker hats on".

It's been a while since Sydney Town Hall has been a social epicentre but for two nights this week it was: one to celebrate fizz on Tuesday and the other for fabulous flicks with the after party for the Sydney Film Festival opening on Wednesday. 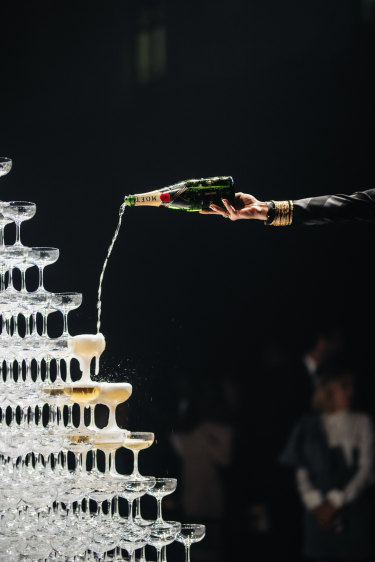 But on Tuesday night it was Moët & Chandon which hosted a glamorous soiree to celebrate the champagne house's 150th anniversary of its signature brut, Moët Impérial, and that's before a single cork is popped in Paris, London or New York. 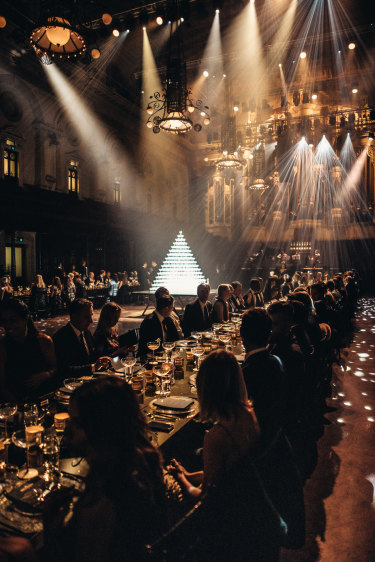 Jumping on a plane from Paris for the evening was Moët & Chandon President and CEO, Stéphane Baschiera, who told PS Sydney was the obvious choice to start the celebrations because "our birthday happens here first thanks to the time zones."

Though Baschiera did appear as bemused as the rest of us more, ahem, seasoned attendees by the oversupply of social media "influencers" who spent the evening posing for selfies.

Thank god Julie Bishop was there, though to be frank, is there a party she hasn't attended lately apart from the Liberals? Skye Leckie's 60th birthday, the Gold Dinner, Fashion Week, the InStyle Awards and even turning up to a girlfriend's birthday bash last weekend wearing sleeves longer than her hemline. Where's it all leading?

Organisers were in a slight panic as the night's big reveal was about to take place, having spent six hours constructing a giant champagne tower of 2870 glasses oh-so-delicately stacked in a pyramid.

As the orchestra started playing James Bond's Skyfall theme, the team of choreographed pourers climbed ladders – in heels – to begin the cascading champagne fountain, which was bigger than anything Jay Gatsby had ever seen.

Thankfully it was just for show, as we would still be there waiting for the bottom glasses to fill given the tower required at least 50 magnums (19 glasses per guest!), let alone trying to unstack the glistening, frothing pyramid.

Instead it was the nifty Moet vending machine at the after party that got a good workout well into the night as Hayden James hit the DJ stand.

Bryan Brown and wife Rachel Ward have one of showbiz's most enduring relationships – 36 years and counting – but their latest collaboration, the new film Palm Beach, which Ward directed and Brown co-produced, is truly a love letter to Sydney's "insular peninsula". 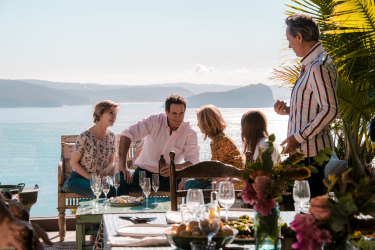 The Northern Beaches are the real stars of Palm Beach.Credit:Elise Lockwood/Universal

The film opened the Sydney Film Festival on Wednesday with one critic describing Bonnie Elliott's  cinematography as being "overlit" and more akin to a shampoo or soft drink commercial. However  there is no denying the beauty of the locations.

As for the spectacular Palm Beach home where all the action takes place, PS can reveal it belongs to architects-turned-property developers Susan and Garry Rothwell, who have had homes in Palm Beach for years.

Susan Rothwell told PS: "We built the house around 10 years ago, I actually designed it with my youngest son William, who is also an architect. It is our place to escape to, and yes we are very fortunate, it is incredibly beautiful there."

"Bryan approached us about shooting in the house. Of course we agreed, we want to support the arts and they were absolutely respectful of the place … they left it looking better than they found it." 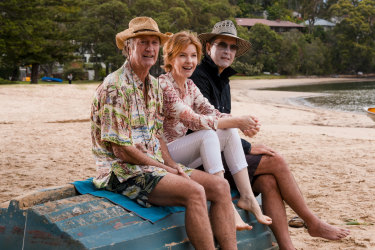 Described as an Australian version of The Big Chill, and with an all-star cast including Richard E. Grant, Greta Scacchi, Brown, his daughter Matilda, Jacqueline McKenzie, Heather Mitchell and Sam Neill, Palm Beach is released in August.

Serving up a helping hand

A decade ago engineer Rob Caslick and a couple of his mates spent every Wednesday night wheeling their beloved barbecue across Darlinghurst to put on a weekly meal for the homeless patrons of Rough Edges cafe.

They banned sausages and paid for "quality" rissoles and chicken out of their own pockets, which they lovingly served. Before long Caslick was running a weekly organic soup kitchen at nearby St Canice's. 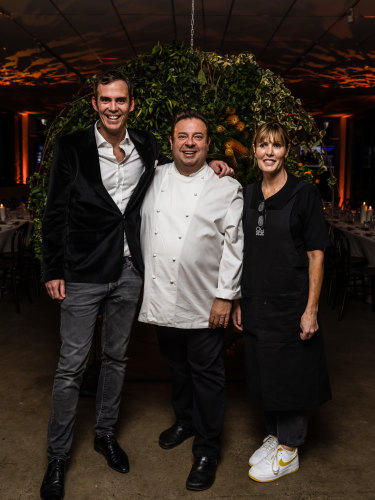 Today Caslick has taken a hefty pay cut and given up engineering to focus on his Two Good charity, which provides quality meals for women living in refuges across Sydney by selling meals to offices across the city.

Just over a year ago he launched a work training program called Work Work, in which groups of four women from refuges are given training and full-time, paid employment to work in Two Good's Redfern commercial kitchen making meals. So far nearly 30 have participated.

"It costs us $5000 to take a woman from homelessness to employment, our success rate has been high, with six out of eight women going on to full-time employment," Caslick told PS following the second annual fundraising dinner on Thursday night, for which he roped in celebrity chefs Peter Gilmore and Skye Gyngell to rattle the pans for the evening.

Rather than recreate the decadence of the Met Gala Ball like some other recent charity events, Thursday night's dinner for 120 of Two Good's customers was a far more humble affair and focussed soley on helping women in need. They raised $381,000, $70,000 of which performer Tim Minchin and his wife Sarah donated, while Two Good parton Judith Neilson threw in $100,000. 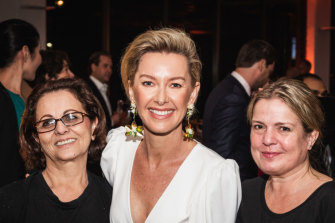 Today co-host Deb Knight, who was MC on Thursday night, with two of the graduates from Caslick’s Work Work scheme.

Caslick and his team are humbly providing a tangible and practical solution for homeless women, many of them mothers, who for whatever reason find themselves living in shelters with limited prospects. They deserve every success.

The cake was not left out in the rain on Tuesday but sadly it wasn't to be cut by Alan Jones. 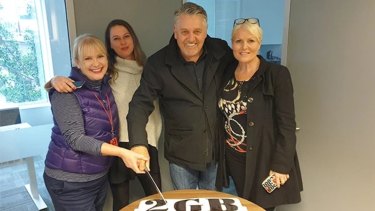 Following PS's ongoing coverage of the “cold war” at 2GB during the protracted negotiations for Alan Jones before he re-signed to stay at the station (scuppering Ray Hadley's plan to take over his vacated timeslot) management has been keen to orchestrate a public kiss and make-up.

Jones complied, partially, and appeared on Hadley's show briefly on Tuesday morning, the pair gloating about their recent ratings victories.

A special celebration cake was baked in their honour, but there was to be no happy snap of the pair cutting the creation together. Jones quickly flew the 2GB coup once he extricated himself from Hadley's studio leaving Ray holding a very sharp knife to do the solo honours.