One thing we know about Chrissy Teigen is that she keeps it one hundred. She’s one of the most open celebs of our time (maybe, ever). Just scroll through her Twitter account or watch her Instagram Stories—she’s an open book. So, it wasn’t surprising that she shared a series of photos and videos of herself to IG yesterday. What was surprising was that her face was swollen after biting into an… orange.

“You’re all just going to think that I got lip fillers but I didn’t get lip fillers between last night and not,” she explained to fans in the video. “I bit an orange to try and open it and I think there must have been a pesticide on it or something. Look at this. It’s hard.” 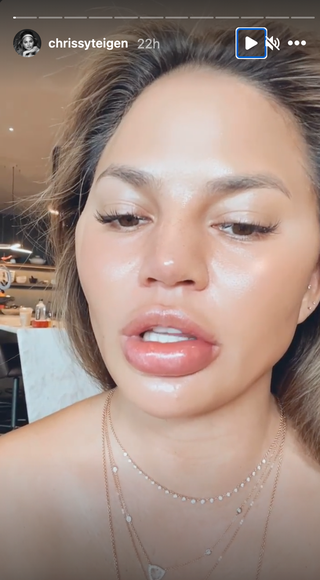 In another Story, she showed the camera that her nose was swollen as well. “I feel like it’s getting bigger,” she added in a different video. 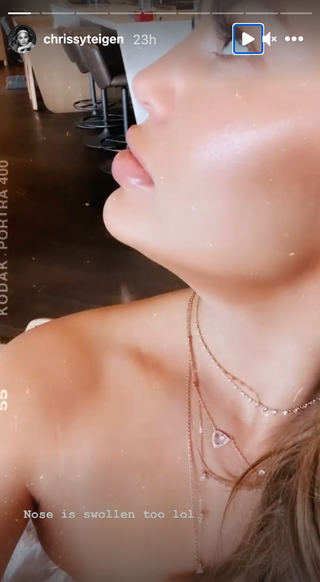 Yikes. Who would have thought that biting into an orange could cause such a reaction? Imagine trying to eat a healthy snack choice and ending up with swollen lips. Even though Chrissy didn’t actually get lip fillers, she has been candid about her decision to get plastic surgery in the past.

Last year, she revealed that she was removing her breast implants. “A lot of people are understandably curious (and nosey!) so I’ll just say it here: I’m getting my boobs out!” she shared. “They’ve been great to me for many years, but I’m just over it. I’d like to be able to zip a dress in my size, lay on my belly with pure comfort! No biggie! So don’t worry about me! All good. I’ll still have boobs, they’ll just be pure fat. Which is all a tit is in the first place. A dumb, miraculous bag of fat.”

Chrissy, you are truly one-of-a-kind.

You love all the nitty-gritty deets on celeb gossip. So do we. Let’s overanalyze them together. ✔️