Denzel Washington, who once paid to send Chadwick Boseman to acting classes, remembers him as a ‘brilliant artist’ 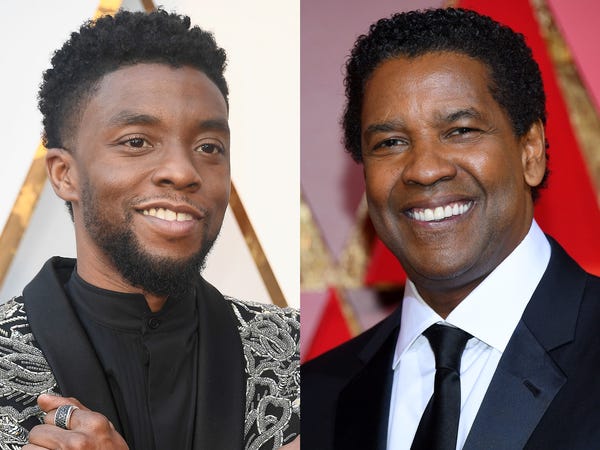 Denzel Washington sent a statement to Entertainment Weekly following Chadwick Boseman's death from colon cancer at the age of 43.

In the statement, Washington wrote: "He was a gentle soul and a brilliant artist, who will stay with us for eternity through his iconic performances over his short yet illustrious career. God bless Chadwick Boseman."

In 2018, Boseman revealed that Washington had helped pay for students, including himself, to study acting in England as part of the British American Drama Academy's Midsummer in Oxford program, held at Balliol College at Oxford University.

"I've basically been holding this secret my whole career. When I came back, I got a beneficiary letter and it said Denzel Washington paid for you," Boseman told Jimmy Fallon on NBC's "The Tonight Show."

In a subsequent interview on "The Late Show with Stephen Colbert," Washington joked that he was still waiting for the "Black Panther" star to pay him back.

"I saw Ryan Coogler and Chad, and he said, 'Oh, you know, I just wanted to thank you for paying,' and I said, yeah, that's why I'm here. I'm not here to see — I liked the movie, 'Black Panther,' yeah, good, Wakanda Forever, but where's my money?'" Washington recalled.

Watch Washington's interview with Colbert below:

Washington is one of many, many stars to pass on their condolences following Boseman's death.

In a statement from his family, it was revealed that Boseman had been battling colon cancer privately since 2016, during which time he has starred in several major movies.

"A true fighter, Chadwick persevered through it all, and brought you many of the films you have come to love so much," his family said. "From Marshall to Da 5 Bloods, August Wilson's Ma Rainey's Black Bottom and several more – all were filmed during and between countless surgeries and chemotherapy. It was the honor of his career to bring King T'Challa to life in Black Panther."

Born in South Carolina, Boseman graduated from Howard University and had small television roles before his first star turn in 2013. His striking portrayal of the stoic baseball star Robinson opposite Harrison Ford in 2013′s "42" drew attention in Hollywood and made him a star.

Boseman died at his home in the Los Angeles area with his wife and family by his side, his publicist Nicki Fioravante told The Associated Press.