Going Deep: How ‘My Octopus Teacher’ Became Both A High-Stakes Thriller And A Profound Commentary On Connection

There’s a chase scene in My Octopus Teacher as suspenseful as anything in a Hollywood thriller. The film’s heroine, a tentacled cephalopod, is being pursued by a pajama shark through a kelp forest off the tip of South Africa.

She jets, weaves, inks the waters like Bond expelling smoke from his Aston Martin, dives for shelter, then encrusts herself in a makeshift armor of discarded shells. The aggressive predator latches onto the balled-up octopus, spinning in a frenzied death roll, but can’t penetrate the shells. Then something even more remarkable happens—the octopus seeks protection in the most ingenious way, by attaching herself to the back of the shark so the marauder can’t attack her. 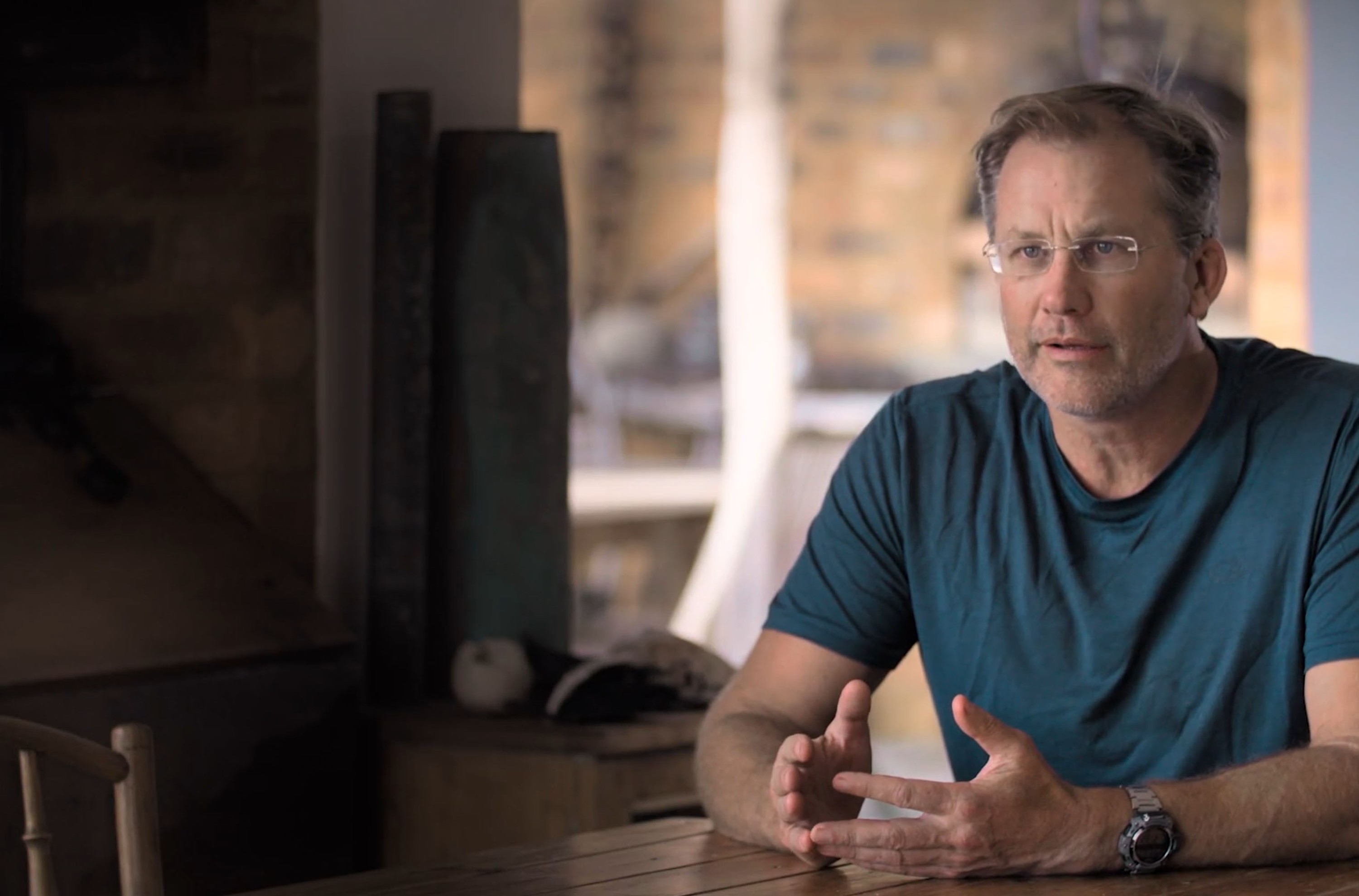 “She’s got the upper hand,” says Craig Foster, the human subject of the film—the male lead, so to speak. “The shark’s been completely outwitted.”

The scene is so compelling because by that point the audience is emotionally wrapped up in the destiny of the octopus—a tribute to the storytelling skill of directors Pippa Ehrlich and James Reed, and of Foster, a South African naturalist and producer of the film. Last month the Netflix film earned an Oscar nomination for Best Documentary Feature, a development Ehrlich says she wasn’t expecting when she tuned in for the announcement from her native South Africa.

“I was surprised enough to jump about a meter and-a-half into the air,” Ehrlich recalls. “This has been a life experience I’d never imagine I’d have.”

Like the stealthy octopus of the film, the documentary slid under the radar for much of Oscar season, somehow eluding broad attention despite winning awards at a variety of film festivals, two prizes at the IDA Awards, and recognition for its cinematography and editing. But in March it began to gain steam, earning a DGA nomination, then the Oscar nod. And late last month it was named top documentary at the PGA Awards.

As is frequently the case with documentaries, the film went through multiple iterations before taking its final form as a two-hander about an eight-limbed creature and her human companion. The movie begins with Foster describing his fascinating and deep attachment to the mysterious underwater environment.

“Most of my childhood was spent diving in the kelp forest,” he explains. “That’s what I most love to do. But as an adult I’d gotten away from that.” 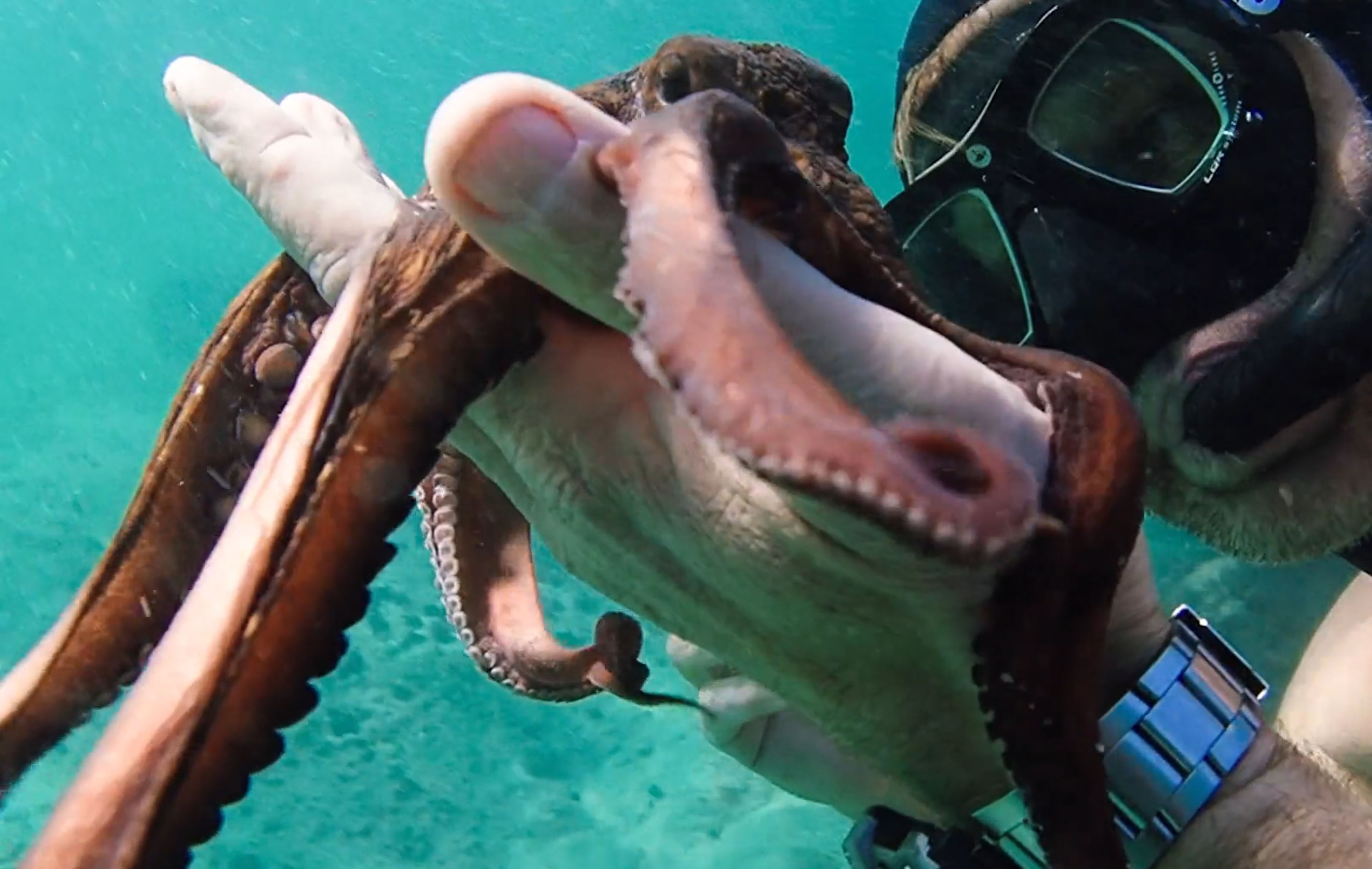 Foster reveals he faced a personal crisis, caused in part by a growing sense of disconnection from nature.

“I went through two years of absolute hell,” he relates. “My family was suffering.”

As a sort of therapy, he committed to undertake daily dives in the frigid waters of the Great African Seaforest, where, one day, he encountered the octopus. Ehrlich and Reed cut one version of the film where Foster related events in a scripted voiceover. But a creative breakthrough came when they decided it would be better if he told it more informally—almost like a story shared around a fireside. They set up a time for the U.K.-based Reed to interview Foster on camera, although at that stage the two men scarcely knew each other.

“He felt more comfortable telling it to a stranger in a way,” Reed observes. “We thought it had to be something we tried, that the story was so powerful and so personal, it needed to be told in his words from the heart.”

Adds Ehrlich, “That gave it a much more authentic and spontaneous feel.”

But the approach involved Foster disclosing sensitive details about himself and his psychology, a challenge for a person who appears to be very shy.

“I’ve been making films for 30 years, but I’ve never been in one of them until now,” Foster says. “On the one hand, it was very hard as I felt self-conscious in exposing my inner feelings, and I felt my personal story was insignificant in the light of the wonder of nature. On the other hand, I felt so much love and excitement for my cephalopod teacher and for her kelp forest environment that I felt deeply compelled to tell the story in the most powerful way that people could relate to.”

In the film, Foster recounts how the octopus slowly began to trust him the more he dove in and around her watery lair. He filmed their interactions and became increasingly dazzled by her displays of intelligence—how she could fashion tools from shells, furl herself in ribbons of kelp to avoid detection, adjust her hunting techniques to envelop crabs, lobsters, and fish. 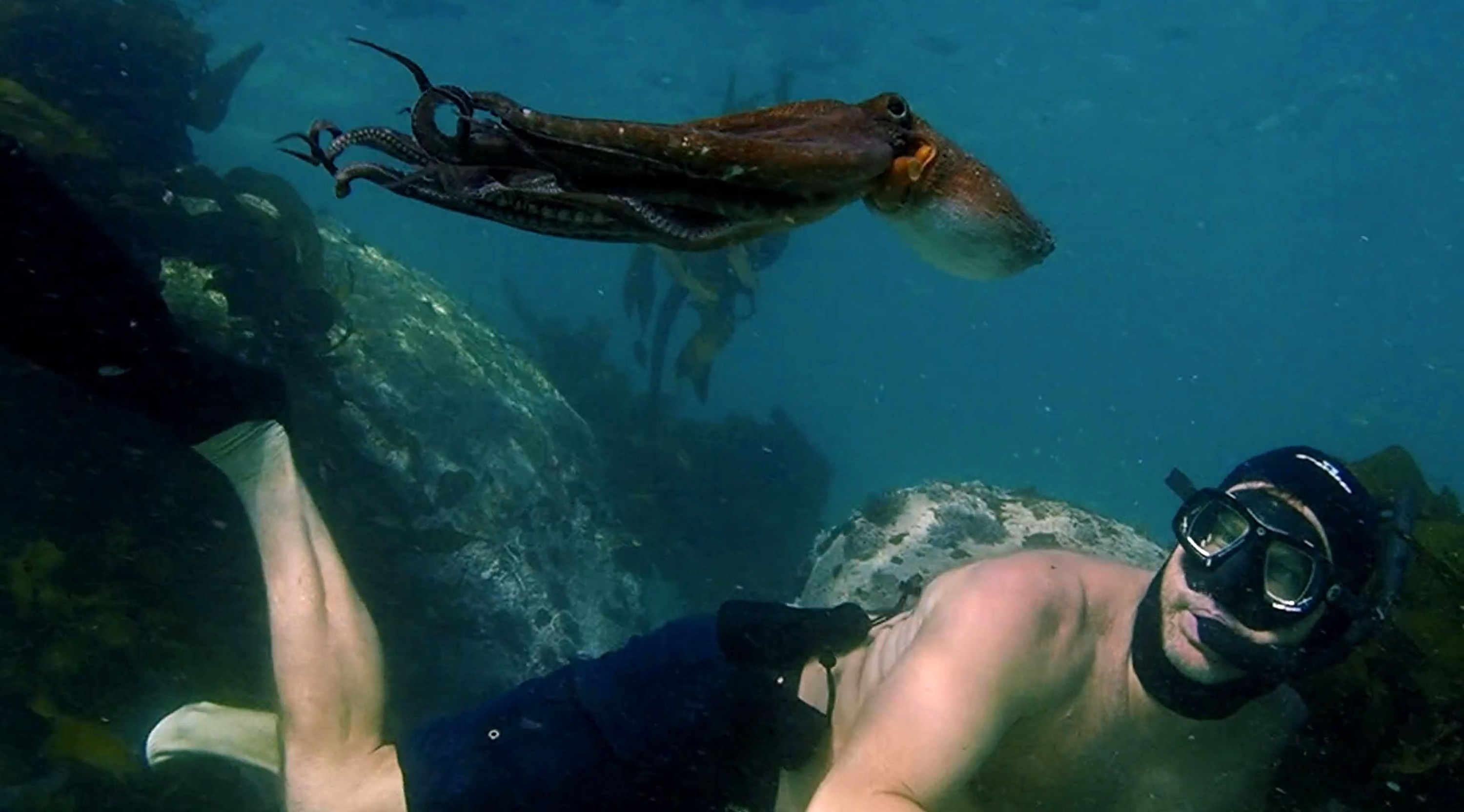 “The boundaries between her and I seemed to dissolve,” Foster relates. “She was really teaching me to become sensitized to the other, especially wild creatures.”

The lifespan of a female octopus of the kind Foster met extends to only about 18 months. But that was enough time for him to be profoundly impacted by her.

“I felt in my life I was getting past the difficulties I had,” he says, during the film. “My relationship with people, with humans, was changing.”

In the documentary, the octopus goes unnamed.

“We never called the octopus ‘Sally’ or anything like that,” Ehrlich says. “There’s always such a danger of anthropomorphism with this film, and we felt like, wherever we could, we wanted to position her as a wild creature and let her be herself in her octopus body. So that’s why it was actually very important for us not to name her.”

The directors sought the input of marine biologists as they edited the documentary, but, Ehrlich notes, the film is not meant to serve as an objective account of octopus behavior.

“We didn’t present it as scientifically definitive,” adds Reed. “That wasn’t the point. The point was that Craig was observing and documenting things, some of which were very clear for everybody to see, others of which were his interpretations… I mean, it’s a completely unique study he did, even though it was informal.”

Foster is enough of an authority on ocean environments to have a species of shrimp named after him (Heteromysis fosteri). His capacity to absorb himself in a task—sometimes to the exclusion of humans around him—may remind some of the central character in another Oscar-winning documentary, Free Solo’s Alex Honnold. The climber Honnold mapped out every centimeter of his intended route up the 3,000-foot face of Yosemite’s El Capitan before he ascended it. Similarly, Foster meticulously mapped the octopus’s seascape and became expert at tracking the species. 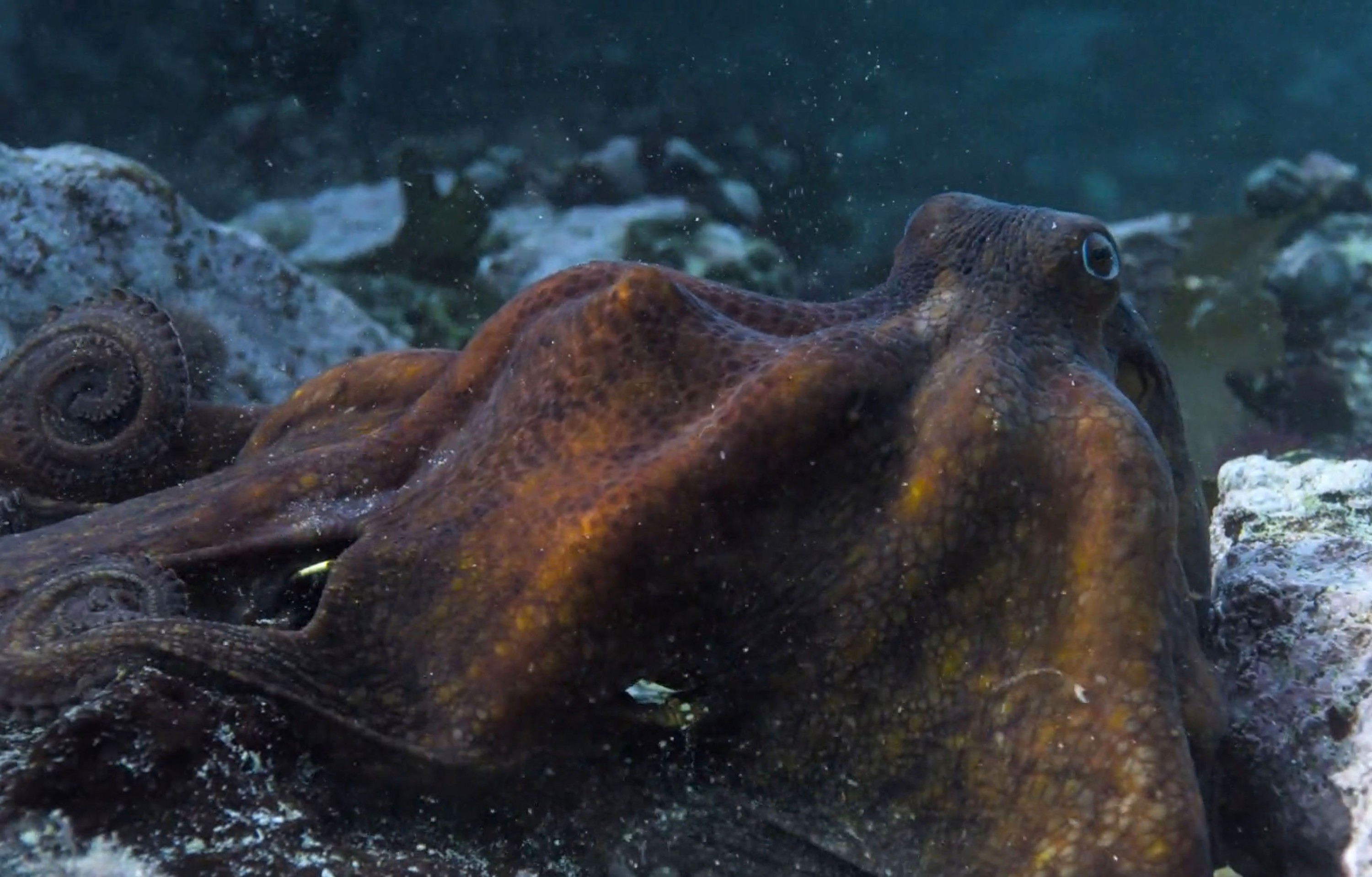 “The psychology of it is as fascinating as the natural history,” Ehrlich observes of both Foster and Honnold. “You’re dealing with very unusual individuals, and individuals who are able to get completely obsessed with one thing and then dedicate their time with a laser focus, that not all human beings can do… Craig is actually an incredibly sensitive and emotional person. And I think that, if he has any difficulties in his personal life, that’s the reason for them,” she says.

Towards the end of the film, emotion pours out of Foster as he reflects upon the year he spent with his octopus teacher.

“Of course, I miss her,” he says, holding back tears. Later, he notes, “She made me realize just how precious wild places are.”

Implicit in the film is a plea to preserve the magical habitat.

“I have deep concerns for the future of the Great African Seaforest and the ocean ecosystem,” Foster says. “I’m currently seeing effects of an ocean heatwave that has damaged some of the Seaforest and the animals in the places I dive. The African Seaforest has always felt so strong to me, and now I see her vulnerability. One of the big motivating forces we all had when making this film was the hope that it might ignite emotion in people to act towards protection and regeneration of the ocean. We purposely did not include hard conservation issues, hoping that this would arise naturally out of the deep-felt emotion that many humans share for nature.”

One of those humans with a deep respect for nature is Ehrlich, who also dives regularly off the South African coast. Prior to being interviewed for this piece, she had just returned from a day exploring the mysterious underwater kelp forest. Like Foster, she free dives, using no oxygen tank. She, too, sees the environmental import of My Octopus Teacher.

“I really felt that it was a very unique and profound opportunity to warm people’s hearts to the ocean, and to the incredible creatures that live in the ocean,” Ehrlich says. “And because it’s such a powerful, emotional, architectural story, I think people really have opened their hearts now in a way that we actually never expected. We’ve been blown away by the response we’ve received.”