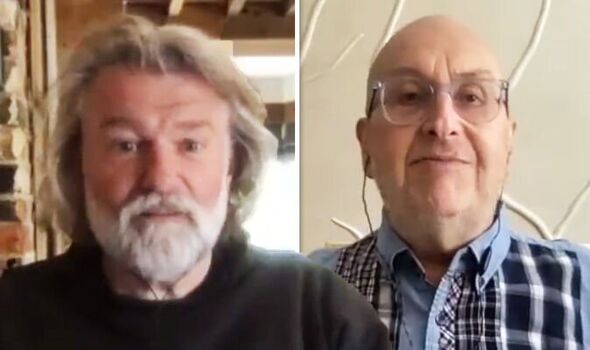 Hairy Biker Si King, 55, has given a new update on his co-star and pal Dave Myers, 64, who is currently battling cancer.

The chef opened up about his friend during a cookery demonstration at the Bolton Food and Drink Festival over the weekend.

Si appeared on stage alongside presenter, Jenny Powell, after Dave had to pull out of the festival due to his treatment.

Speaking to the crowd, he thanked their fans for their “support” and revealed that Dave is still in the “trenches” of his illness.

He said: “I just wanted to say, from Dave and I, thank you so so very much for all of the goodwill and support, all the messages really do not go unnoticed.

“He’s doing canny but as you can appreciate he’s right in the trenches of it all at the minute but he’s getting there, thank God,” as reported by Manchester Evening News.

Dave went public with his cancer diagnosis in May, but has decided not to reveal what type of cancer he is battling.

He made light of his diagnosis and joked that he will be a “baldy biker” for a while.

After undergoing chemotherapy, he said the treatment had left him with “sore eyes” and impacted his taste and smell.

He told Kate Thornton on her White Wine Question Time podcast last month: “Fortunately, the chemo is working but it’s the effect chemotherapy has on you. Every day is a school day.

“My eyes are sore because my eyelashes have fallen out, it’s crap like that that’s really irritating.”

Dave added that he “wouldn’t wish it on [his] worst enemy” and vowed to “never whinge again” once he beats the illness.

Si also opened up about the effect Dave’s illness has had on him, admitting that it had been “really tough” to watch his friend go through it.

He told Kate: “It’s hard seeing someone you love in those trenches. It really is tough.

“He’s as tough as an old boot, which is what we’re all relying on. He’s as hard as nails.”