Hoda Kotb is ready for love! The much-loved TV personality broke up with her longtime partner, Joel Schiffman, earlier this year but she’s now bravely jumping back onto the dating bandwagon.

The mom-of-two chatted with her co-host, Jenna Bush Hager, on their show Hoda & Jenna and revealed not only is she looking for someone special – she’ll let her colleague set her up.

MORE: Inside Hoda Kotb’s beautiful homes where she lives with her daughters

In the clip, which was later shared on Instagram, Hoda chatted about how great Jenna was at matchmaking.

A stunned Jenna then turned around and said: “I want to set a person in pink up,” as Hoda looked down at her own rose-colored suit.

It was then that Hoda added a twist and confessed: “I really, I wanna be set up.”

Jenna didn’t miss a beat and took her for her word: “That is a challenge that I’m gonna go for,” she added before admitting she had chills of excitement.

A post shared by TODAY with Hoda & Jenna (@hodaandjenna)

Hoda said she would never allow anyone who wasn’t close to her to take on this challenge and added: “You know me and I trust you.”

Fans adored their interaction and are rooting for Hoda to find love again. They commented: “Love this. Find her someone wonderful Jenna,” wrote one, while another added: “YES!!! I have chills too. GO JBH,” and a third remarked: “Good luck setting Hoda up. She needs a special man that loves children.”

MORE: Savannah Guthrie pokes fun at herself as she shares upset over Roger Federer retirement

Hoda was with Joel for eight years before they parted ways, but they both continue to co-parent their children, Hayley and Hope. 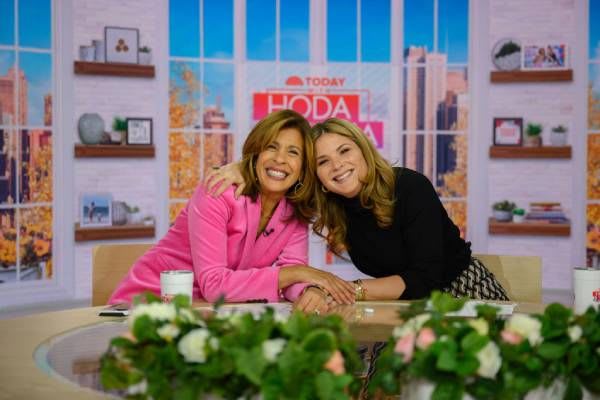 Hoda and Jenna are friends and co-hosts

She has thanked him for helping her make the decision to adopt her daughters.

She told Good Housekeeping magazine: “I don’t think I would have adopted if it hadn’t been for Joel. Having a stable relationship in that moment was really important.

“Once that fell into place, it didn’t seem as scary to me. I ask read about Sandra Bullock and the children she adopted. I’d always felt a weird connection to her, though I only knew her from the show.

“But she was my age, and I just thought, ‘Wow, she’s really cool.’ I called her, and we talked.
“She said adopting was the most important thing she’d ever done. When I had made the decision to adopt and was on the plane to pick up my [first] daughter, I called her again. She said, ‘It’s about to begin!’ Sometimes all you need is a model before [you realize] I can handle it.”