On September 11, Donald Trump made a rare public outing at the Seminole Hard Rock Hotel and Casino in Florida for a boxing match between Evander Holyfield and Vitor Belfort. The former U.S. president, alongside his son Donald Trump Jr., joined rapper 50 Cent in the commentary booth, per CNN. Att the highly anticipated fight, which marked the former world champion’s first time back in the ring in over a decade, Donald made his highest-profile public appearance since leaving the White House in January. “They say there is a lot of people watching,” the former president said at one point during the match, sarcastically adding, “I can’t imagine why,” The New York Times reported.

The former commander-and-chief also addressed the crowd after “We Love Trump” chants erupted throughout the event. “Thank you very much, everybody. This is an honor to be with you and what a great evening. And I think you’re going to see an incredible fight,” he said, according to a clip retweeted on Don Jr.’s Twitter account. Donald could also be seen smiling and echoing, “That’s good,” under his breath when the audience continued chanting. “Thank you, everybody, very much. We love our country … we love our country,” he proclaimed.

Despite the warm welcome he received at the boxing match, Donald’s son turned heads shortly before the event. To find out why Don Jr.’s request for questions for his father went terribly wrong, keep scrolling. 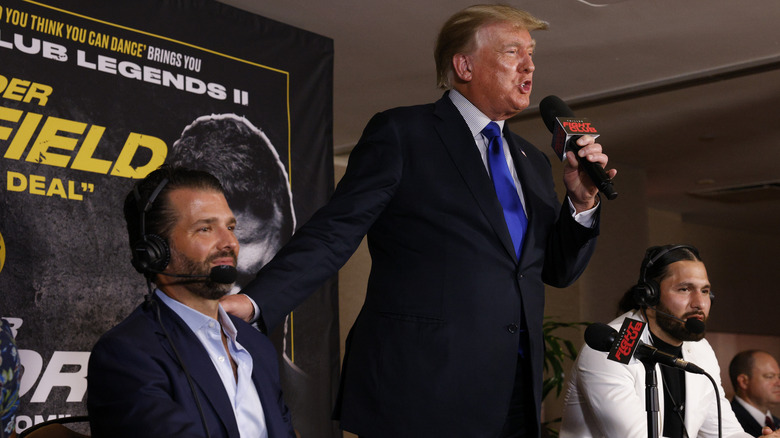 Donald Trump may have been in the presence of his fans while commentating the Evander Holyfield vs. Vitor Belfort match at the Seminole Hard Rock Hotel and Casino in Florida, but it wasn’t before Donald Trump Jr. caused an uproar on Twitter. When the former president’s son requested fans send in some questions to ask his dad, social media users called out the politicians for spending the 20th anniversary of the September 11 terrorist attacks at the sporting event.

“The biggest fight of the year this Saturday. My Dad – President Trump- & I, are commentating and we’re going to have some fun,” Donald Jr. tweeted on September 10. “I’ll finally [be] pushing him on the burning question. Are aliens real and what’s up with Area 51? Shoot me some other questions here!” Though some users obeyed in his request, some took the opportunity to call out the insensitivity. “How is this event in any way appropriate on the 20th anniversary of 9/11?” tweeted one user.

Other Twitter accounts made a joke of the ordeal, replying with messages like, “Ask him about his taxes…” and “What is the quid pro quo on this latest scam?” One person teasingly referenced Donald’s ongoing claims that he won the 2020 presidential election, tweeting, “Is he going to advise the dude who gets knocked out to call the fight rigged?”