After touring with her 16-month-old son Onyx, the ‘Fancy’ hitmaker admits that she is desperate for a ‘recharge’ as she has to balance her dual responsibilities as a mom and an entertainer.

AceShowbiz –Iggy Azalea is desperate for a “recharge” after touring with her baby boy.

The rap star is currently on tour with her 16-month-old son, Onyx, and she admits she’s struggling to balance her dual responsibilities.

The Australian star took to Twitter to open up about motherhood on the road, revealing the worst thing about it is the lack of sleep.

“4 shows in a row with a baby who wakes my a** up at 6.30am daily is a fully blown test on my body’s ability to recharge,” Iggy says. “Taking a much needed two day break now.”

Iggy Azalea shares her struggle to balance her dual responsibilities.

The “Fancy” hitmaker, who is touring with Pitbull, is no longer dating Playboi Carti – the father of her child – and recently announced she plans to take a break from music for “a few years” to focus on “other creative projects.”

Iggy revealed that her most-recent album, “End of an Era”, would be her last for a while, while recently launching her own make-up brand.

“End of an Era is so special to me because after I drop my album iam going to take a few years to focus on other creative projects and things I’m feeling passionate and inspired by, beyond music,” she tweeted. “I’m excited for you guys to see different sides to me in the future.”

“Shifting my energy and focus to what I’m most excited about is what is right for me and I hope you’ll continue to support whatever creative projects I’m out here doing!” 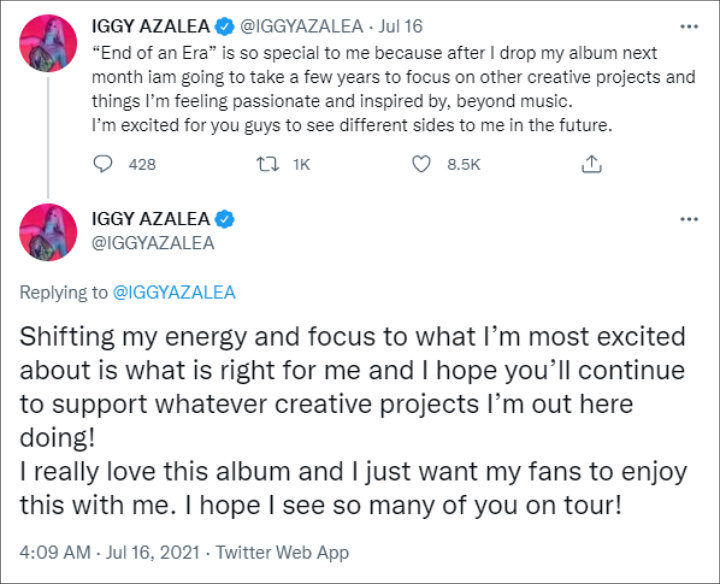 Iggy Azalea shared what makes her excited about her projects.

Iggy first announced that she had welcomed her first child in June 2020. “I have a son,” she wrote at the time. “I kept waiting for the right time to say something but it feels like the more time passes the more I realize I’m always going to feel anxious to share news that giant with the world.”