Is This Proof Meghan And Harry Really Are Close To The Queen?

Prince Harry and Meghan Markle surprised the world when they announced the name of their newborn daughter in June. The duke and duchess released a press statement on their Archewell website that read, “On June 4th, we were blessed with the arrival of our daughter, Lili. She is more than we could have ever imagined …” Lilibet Diana Mountbatten-Windsor was “named after her great-grandmother, Her Majesty The Queen, whose family nickname is Lilibet.”

As is typical with the response to Harry and Meghan these days, it wasn’t long before all hell broke loose in England. See, the queen plays an important role when it comes to choosing a moniker for a royal family member, per the Mirror. Royals typically approach the queen with their wishes for their child’s name, and she would approve or deny (though the palace has never stated she gets the final say). So, when the Sussexes announced Lili’s name, there were questions about whether Queen Elizabeth knew she would have a namesake. The pair’s spokesperson set the record straight, telling CBS News in a statement that Harry definitively “spoke with his family in advance of the announcement — in fact his grandmother was the first family member he called … had she not been supportive, they would not have used the name.”

Now Harry and Meghan’s friend and “Finding Freedom” biographer Omid Scobie has added his two cents on the Lilibet moniker.

Queen Elizabeth, Meghan Markle, and Prince Harry are 'as strong as ever' 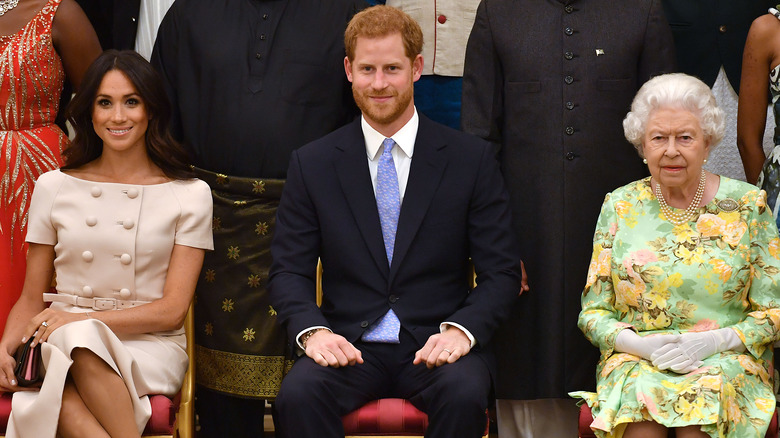 Lilibet Diana Mountbatten-Windsor’s name sparked an intense debate, partially because the moniker is a term of endearment used only by those closest to Queen Elizabeth. Her dad, King George V, first called his daughter Lilibet. This is the same devoted father who dotingly gushed (via The National News), “Lilibet is my pride.” Queen Elizabeth’s late husband nearly 74 years, Prince Philip, also called her by the nickname. Now, Omid Scobie is suggesting that Queen Elizabeth’s relationship with Prince Harry and Meghan Markle is far closer than anyone had ever imagined because she allowed them to use her nickname for their daughter.

Scobie appeared on “Good Morning America” and revealed new details about the relationship between the Sussexes and the queen. He claimed, “When it comes to that relationship with the queen, it is as strong as ever.” He continued, “They have nothing but love for her.” Scobie implied that the Sussexes feel great affection for the head of the monarchy that they fled in 2020. He then underscored his statement by adding, “Of course, we saw them name their daughter after the queen’s very nickname. So that really gives us an insight into that close relationship.”