Kim Kardashian Flew A TON Of Celebs To Tahiti To Celebrate Her 40th – With Strict Covid-19 Safety Protocols! Check Out All The Pics!

As you might imagine, the KUWTK star pulled out all the stops to celebrate her 40th birthday last week — and it’s safe to say she outdid herself. According to reports, the pop culture icon celebrated the milestone by flying about 50 friends on a Boeing 777 to a private isle in Tahiti for a six-day getaway. Wow!

While the bulk of guests arrived on October 20 — a day before Kimmy’s actual b-day — Kanye West arrived on Friday, Oct. 23 after taping Joe Rogan‘s podcast in Austin, Texas and “spent the last few days of the trip with Kim and her friends,” according to TMZ.

A source told E! News that celebrity party planner Mindy Weiss helped put together the celebration, which saw a mix of new and old friends taking over the “entire private island” for a week of celebrating the KKW Beauty mogul, sharing:

“She chartered the Crystal Luxury Jet to fly everyone privately and they left LA early Tuesday morning, the day before her actual birthday. They had multiple events to celebrate Kim turning 40. It was a mix of family, old friends and newer friends and they took over the entire private island for an incredible week of activities… Everyone close to Kim from all aspects of her life were there. Kris, Corey, Kourtney, Khloé and Tristan, Kendall and Rob joined along with several girlfriends that she has known since grade school.”

Innerestingly, it appears Kylie Jenner didn’t attend the festivities, as the E! News source noted the makeup mogul was in Houston with daughter Stormi Webster and baby daddy Travis Scott. But boy did they sure miss out!

Guests reportedly spent the week-long celebration dancing, whale watching, swimming in lagoons, kayaking, snorkeling, playing volleyball, and enjoying outdoor dinners right on the beach. TMZ reports that Kim even treated everyone to a private screening of the movie This is 40 on the sand!

“Everyone came together and showed their love and respect for her. They had slide show of her life and nightly parties. During the day, they took boat rides, went snorkeling, walked on the beach and tanned by the pool. It was an epic and memorable week that nobody will forget.”

While the celebration was undeniably lavish, it was also safe. Sources told TMZ that the reality star picked out an island that hadn’t seen any COVID-19 cases, and had asked all her guests to quarantine for two weeks before the trip and get multiple tests.

Perhaps that’s why Kylie couldn’t make it? Gurl has not been quarantining…

Since arriving back to the states on October 26, some of the guests have taken to social media to share pics from the getaway. On her Instagram Stories, Kourt posted a photo of herself wearing an Aexae bikini during the trip, noting it was the “best week” of her life: 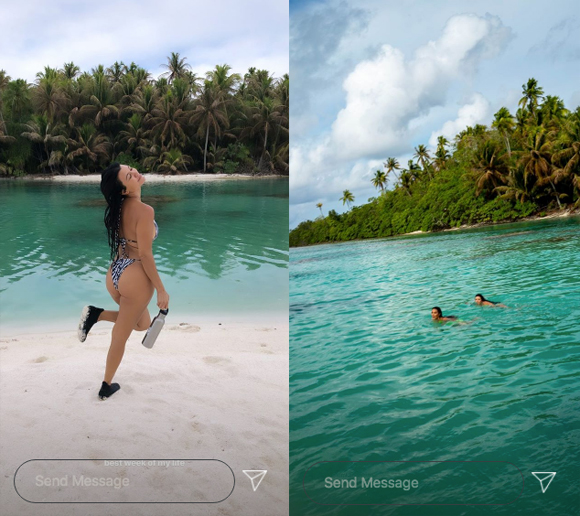 Meanwhile, Kenny shared a slideshow of herself enjoying island life (below):

And, of course, Kim shared some highlights of her own while telling fans how “blessed” she was to have such a luxurious celebration surrounded by loved ones. She wrote in a string of tweets:

Wow. We can’t wait to see what Kimmy Kakes does for her 50th!