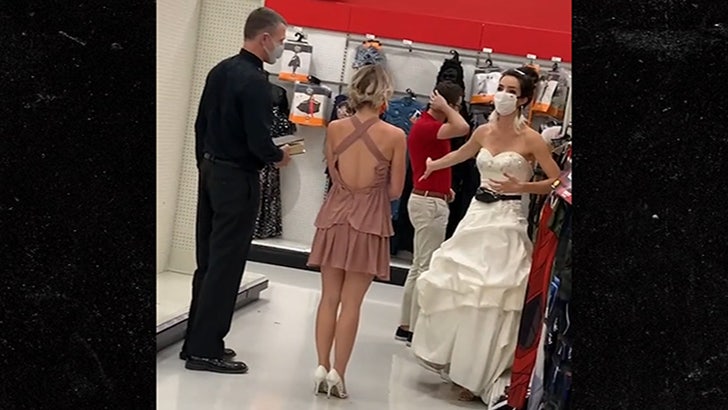 One woman must’ve had Elvis lyrics in her head as she stormed into a Target, hunted for her fiance in a bride’s dress and demanded his hand in marriage … it’s now or never.

Check out this video of a gal on a mission to walk down the aisle, but first having to peruse other types of aisles so she could confront her Target employee hubby-to-be with a minister in tow. Eventually, she finds him stocking something … and it pops off.

Customers recorded the awkward scene, and you can make out the gist of what’s happening here. Bridezilla tells her man she wants to get married right there and then, or she’s ending things between them for good. The ultimate ultimatum.

She says he put an engagement ring on her finger 2 years ago — but hasn’t pulled the trigger yet … and she’s sick of waiting. The dude is clearly uncomfortable, and asks her if they can talk outside. The woman agrees, but it sounds like her mind is made up.

It’s funny too, as the caravan of people pass the photog … you can hear the fiance say something to the effect of, “Could someone had told me then?” Sounds like he was caught as much off guard as anyone else witnessing this bizarre love blitz.

Now, we should note … some people are saying this a set-up stunt. If so, BOOO … but it’s still pretty crazy to see it play out on video. Assuming it is real, good luck? No question who’s the dominant one for this happy couple.