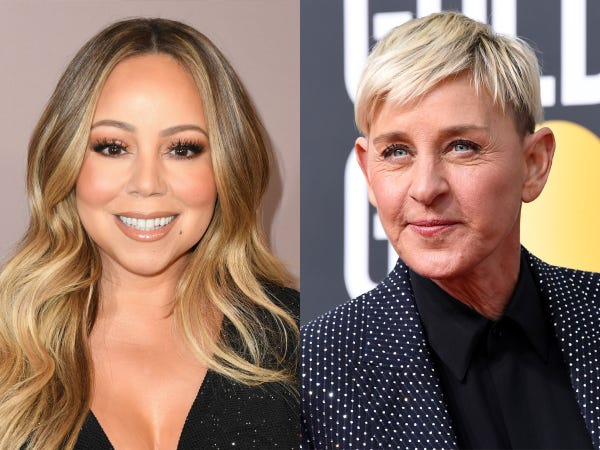 Mariah Carey revealed in a new interview that being pressured to open up about her pregnancy on "The Ellen show" made her "extremely uncomfortable."

The singer appeared on the talk show, hosted by Ellen DeGeneres, in 2008, and was coerced by DeGeneres into making a toast with champagne — thus revealing that she was pregnant when she didn't drink the alcohol. Carey had a miscarriage shortly thereafter.

"I was extremely uncomfortable with that moment is all I can say. And I really have had a hard time grappling with the aftermath," she told Vulture. "I wasn't ready to tell anyone because I had had a miscarriage."

"I don't want to throw anyone that's already being thrown under any proverbial bus, but I didn't enjoy that moment," Carey added.

The uncomfortable clip of Carey attempting to evade DeGeneres' questions recently made the rounds on Twitter, as allegations against the talk show host have continued to come to light.

Carey's criticism of DeGeneres comes after a turbulent past few months for the host.

Many seemingly "awkward" interviews that DeGeneres has done with other stars on her show have recently come to light, including one in which she pokes fun at Sofia Vergara's Colombian accent (Vergara told fans she "was never a victim" and was "always in on the joke.")

Former employees of DeGeneres, including a producer and a DJ, accused her of acting rudely and creating a toxic environment on the set of "The Ellen Show."

The Australian radio host Neil Breen recently said he was told not to talk to, look at, or approach DeGeneres when he worked with her in 2013.

DeGeneres' executive producer Andy Lassner recently pushed back on speculation about the show's cancellation, but a report on August 1 said the "Late Late Show" host James Corden could replace DeGeneres.

Despite the growing number of allegations, plenty of stars — such as Ashton Kutcher, Diane Keaton, and DeGeneres' wife, Portia de Rossi — have come to DeGeneres' defense.