More than ten years after her split from Marilyn Manson, Evan Rachel Wood publicly accused the musician of abuse in an effort to stop him from ‘ruining any more lives.’ And now, he’s speaking out.

Evan Rachel Wood has been open about being a victim of sexual assault over the years, and now, she has named her ex, Marilyn Manson, as her alleged abuser. “The name of my abuser is Brian Warner, also known to the world as Marilyn Manson,” she wrote on Instagram during the early hours of Feb. 1. “He started grooming me when I was a teenager and horrifically abused me for years. I was brainwashed and manipulated into submission.”

Following her post, Marilyn took to Instagram to deny the accusations, calling them “horrible distortions of reality”. He also says that his romantic relationships have always been “entirely consensual”. To read his full statement, as well as hers, take a look below.

In Evan’s post, she explained why she decided to come forward with the alleged identity of her abuser now. “I am done living in fear of retaliation, slander or blackmail,” she explained. “I am here to expose this dangerous man and call out the many industries that have enabled him before he ruins any more lives. I stand with the many victims who will no longer be silent.” After the actress came forward, at least four other women also shared similar accusations against Marilyn Manson on social media.

Rose McGowan, who was previously engaged to Marilyn, also applauded Evan for coming forward with her abuse claims. “I stand with Evan Rachel Wood and other brave women who have come forward,” the Charmed actress said on Twitter. “It takes years to recover from abuse and I send them strength on their journey to recovery. Let the truth be revealed. Let the healing begin.”

Following Evan’s claim, Marilyn was immediately dropped from his label, according to Rolling Stone.

Evan first opened up about being abused during a 2016 interview with Rolling Stone. At the time, she did not name the identities of her abusers, but claimed that she was “raped” twice — once, “by a significant other while we were together” and another time “by the owner of bar.” In 2018, Evan was an advocate for getting the Sexual Assault Survivors Bill of Rights passed in 50 states, and even testified before a House Judiciary Committee as a sexual assault survivor. 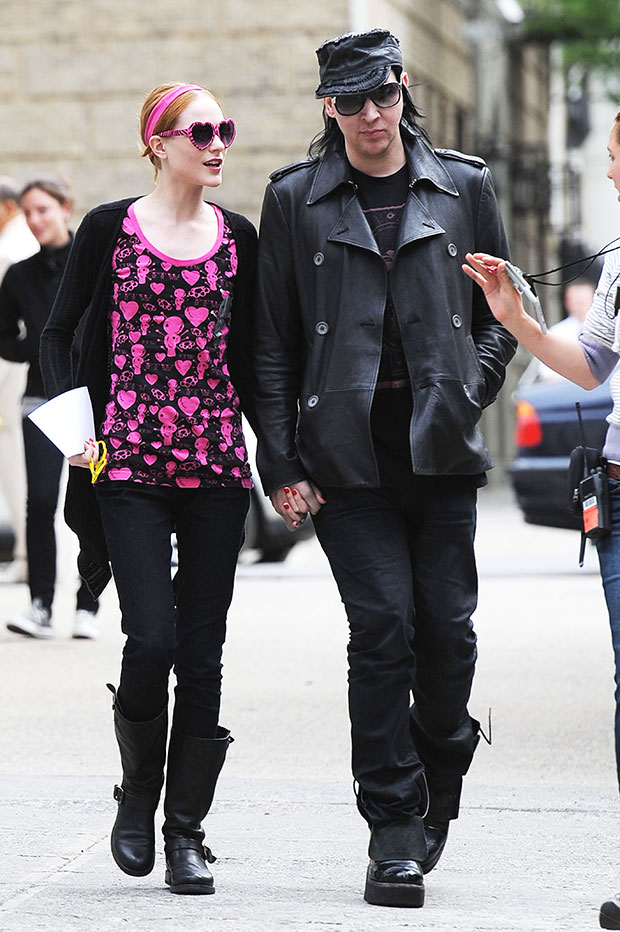 In 2019, Evan also testified for the Phoenix Act in front of California legislators. During the testimony, she referenced an abusive relationship that she was in during her late teen years. Although she did not name her abuser at the time, many speculated that it was Manson, who Evan started dating when she was 18 (they got together in 2006 and were engaged for seven months in 2010 before breaking up). Marilyn was asked about the speculation, among other accusations against him, during a 2020 interview with Metal Hammer magazine, which he then cut short.

After the interview, the magazine sent follow-up questions to Manson’s team. “We have advised our client not to comment further on your article,” the representative replied. However, the musician’s team issued a lengthy statement in response to the various questions asked. In conclusion, they noted, “Unfortunately, we live in a time where people believe what they read on the Internet, and feel free to say what they want with no actual evidence. The effects can be catastrophic and promoting non fact based information is wholly irresponsible. All we can try and do, as the media and individuals, is to use facts and truth and not hide behind gossip and conjecture to further our own agendas.”

Additionally, Manson “categorically denied” allegations of unspecified sex crimes that were made about him to police in 2018. After the District Attorney declined the case against Manson to due “absence of corroboration” and an expired statute of limitations, Manson’s rep told The Hollywood Reporter: “[The allegations] are completely delusional or part of a calculated attempt to generate publicity for the claimant’s business of selling Manson memorabilia. The police report that spurred the investigation was accompanied by the woman’s press release and other attempts to generate publicity that fraudulently claimed she was held captive by Mr. Warner for 48 hours in 2011. Any claims of sexual inpropriety or imprisonment at that, or any other, time is false.”