Martha Stewart and Snoop Dogg have teamed up for a festive cooking challenge, and fans are obsessed with their enduring friendship.

Unlikely friends Martha Stewart and Snoop Dogg are getting in the Christmas spirit! The odd couple reunited virtually on December 14 for a Salesforce corporate event, in which they gave a cookie decorating tutorial. The 79-year-old TV host broadcast from her home in New York, while the rapper, 49, showed off his baking skills from his home in California. “@snoopdogg and I just finished a one hour “tutorial” on Cookie baking and decorating,” Martha wrote on Instagram, as she shared a series of snaps of their weed-inspired sweet treats. “It was great fun!! And the cookies were amazing,” she added.

Martha posted a pic of herself posing with a box of her ‘CBD Wellness’ gummies, along with photos of the cookies themselves. One baked good featured an image of Martha, and was accompanied by the caption ‘There’s some ho ho ho in this house,” likely a subtle reference to Cardi B‘s hit song “WAP”. She also showed off cookies which were decorated in the shape of marijuana leaves, and dog bones adorned with Snoop’s name. 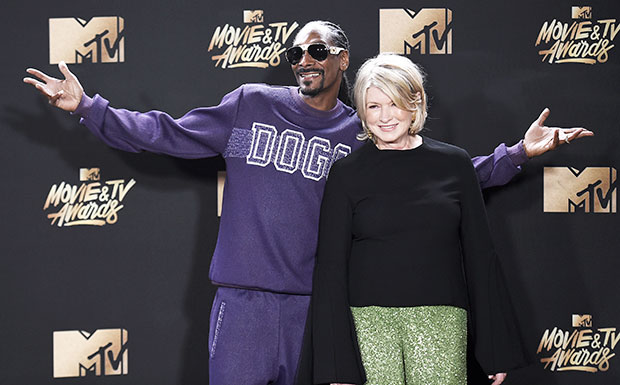 “Your friendship with Snoop is one of the greatest friendships in history,” one fan commented, while another wrote, “You and Snoop make a pretty legendary pair! It’s funny how things have evolved!! Love ya, Martha! Merry Christmas.” The duo first teamed up in 2016 for the VH1 series Martha & Snoop’s Potluck Party Challenge, and have since appeared in a 2017 Super Bowl commercial for T Mobile, and most recently a Tostitos ad campaign.

As fans would know, both celebrities have served time behind bars — an experience which bonded them. Martha did a five-month stint in 2004 at Federal Prison Camp in Alderson. She was charged with conspiracy, obstruction of an agency proceeding, and making false statements to federal investigators. Meanwhile, the “Drop It Like It’s Hot” hitmaker spend three years in and out of prison in the early 90s after graduating from high school in Long Beach, California.