Meghan Markle and Prince Harry’s infamous March interview with Oprah Winfrey is still making waves. The two made some serious bombshell claims while sitting down with the legendary talk show host, including the shocking claims one member of the royal family — who remains unnamed — made a racially insensitive comment about the color of their son Archie’s skin before he was born.

Meghan also candidly opened up about experiencing suicidal thoughts while a senior member of the royal family. She claimed she shared the thoughts she was having with what she described as the “institution,” meaning the senior officials that take care of royal family. Meghan told Winfrey that she told them she needed to go somewhere to get help for her mental health issues, but claimed they encouraged her not to as “it wouldn’t be good for the institution.”

In response, Buckingham Palace issued a statement on behalf of Queen Elizabeth II which read (via USA Today): “The whole family is saddened to learn the full extent of how challenging the last few years have been for Harry and Meghan. The issues raised, particularly that of race, are concerning. While some recollections may vary, they are taken very seriously and will be addressed by the family privately.” It ended by noting that “Harry, Meghan and Archie will always be much loved family members.”

Well, what Harry and Meghan supposedly thought of the royal family’s response has been revealed. 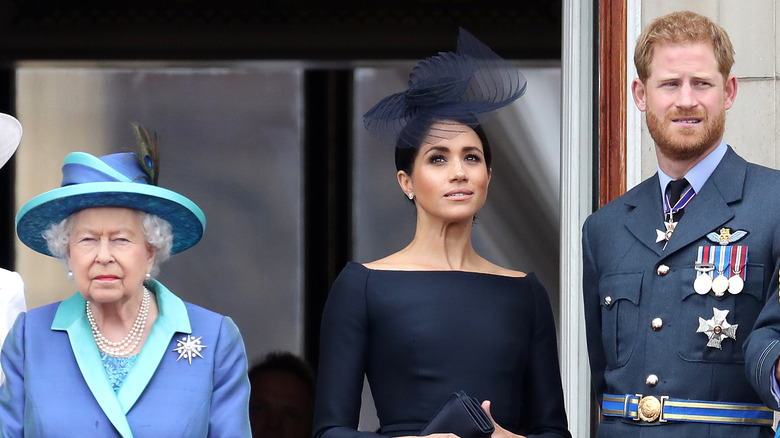 Though Prince Harry and Meghan Markle don’t appear to have spoken publicly about the royal family’s response to their Oprah Winfrey interview, sources have revealed what royal watchers have suspected ever since the queen responded publicly — they aren’t happy.

People shared an excerpt from the reissued version of the Omid Scobie and Carolyn Durand book, “Finding Freedom,” in which it’s claimed by a friend of the couple that Harry and Meghan didn’t appreciate the wording in Kensington Palace’s statement. “The queen’s ‘recollections may vary’ comment did not go unnoticed by the couple, who, a close source said, were ‘not surprised’ that full ownership was not taken,” the book claims (via Daily Mail). “‘Months later and little accountability has been taken,’ a pal of Meghan added. ‘How can you move forward with that?'”

It’s been thought for a while by royal watchers that the two weren’t thrilled with the queen’s reaction to their claims, as the couple have continued to share not exactly the nicest things about their time as senior royals since.

During a May appearance on Dax Shephard’s “Armchair Expert” podcast, Harry suggested his dad, Prince Charles, had “suffered” because of the way the queen and Prince Philip had brought him up, which he claimed was passed down to him. He added he wanted to “break the cycle” of “pain,” which it’s thought was likely pretty upsetting for the queen to hear.

If you or anyone you know is having suicidal thoughts, please call the National Suicide Prevention Lifeline​ at​ 1-800-273-TALK (8255)​.