With her tiny diamond nose ring, she almost stole the limelight at her daughter Meghan’s wedding to Prince Harry.

But now Doria Ragland has acquired a more permanent look – a tattoo. The social worker showed off her new inking on Friday – her 66th birthday – as she walked her two dogs near her Los Angeles home.

A witness said: ‘She looked in great shape. The tattoo is quite large and covers much of her right arm. It looks like some sort of flower design and is quite intricate. It runs up most of her forearm.’ 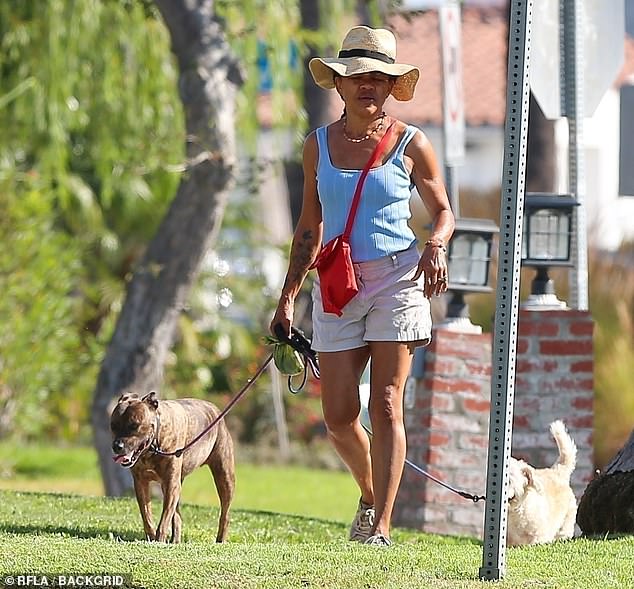 According to Meghan’s now-defunct blog The Tig, Doria’s childhood nickname for her was ‘Flower’. And in an interview with Glamour magazine before she met Prince Harry, she described her mother as ‘a free spirit’, saying: ‘My mom’s a yoga instructor, but she does social work as well and she works specifically with the geriatric community.

‘She’s got dreadlocks and a nose ring. She just ran the LA Marathon. We can just have so much fun together, and yet I’ll still find so much solace in her support. That duality co-exists the same way it would in a best friend.’

Miss Ragland, the only member of the Markle family to attend the Royal wedding in 2018, remains close to her daughter and Prince Harry and their children Archie, three, and 15-month-old Lilibet.

She owns a business called Loving Kindness Senior Care, which states on its website: ‘Our role is to provide a holistic approach to cases by guiding and advocating for the client and families while managing and navigating concerns around health and social issues.’

It is not known if Miss Ragland will help care for her grandchildren at the Sussexes’ Montecito mansion while the pair visit the UK and Germany this week.

They were reported to have landed in the UK yesterday, with the Duchess set to give a keynote speech tomorrow in Manchester at the One Young World summit.