Michael Strahan is one of the most popular daytime TV co-anchors and is a familar face to wake up to each morning on Good Morning America.

However, when it comes to his personal life, the former sports star prefers to keep it a little more private, only occasionally sharing glimpses of it with fans on social media.

The dad-of-four’s children are growing up fast though, and his twin daughters, Isabella and Sophia, are becoming stars in their own right.

Memorably back in May, the star shared a photo of them as they celebrated Cinco De Mayo – and it sparked quite the reaction from concerned fans!

They looked to be having a festive time and beamed for the camera, but his social media followers had the same question – where was whis beloved dog Enzo?

MORE: Michael Strahan’s office inside New York home is so unexpected – see inside

Michael’s pet pooch – who regularly features in his photos – was nowhere to be seen and fans wanted to know why he was missed out of the celebrations.

One asked: “Nice picture!! How come Enzo isn’t in the picture? He used to be in a lot of your posts, not much anymore, is he ok? He is such a great dog,” while a second said: “Where is Enzo?”

Many others remarked on just how grown-up Michael’s daughters look and called his family, “beautiful,” and, “so tall”.

Michael’s daughters are indeed growing up fast and are both now making waves in the modelling world. Back in April, the star’s daughter Isabella made her runway debut at the Sherri Hill fashion show in New York City.

The proud dad shared a montage of some of the highlights from the day, including Isabella getting ready in the makeup room ahead of her big moment, and her walking down the runway dressed in a show-stopping bridal gown.

Alongside the video, the TV star wrote: “Very proud of you, @isabellastrahan, for crushing your first runway this weekend for @sherrihill!!!! As a parent, there is nothing like watching your child succeed at what they love with a smile on their face! #ProudDad #GirlDad.” 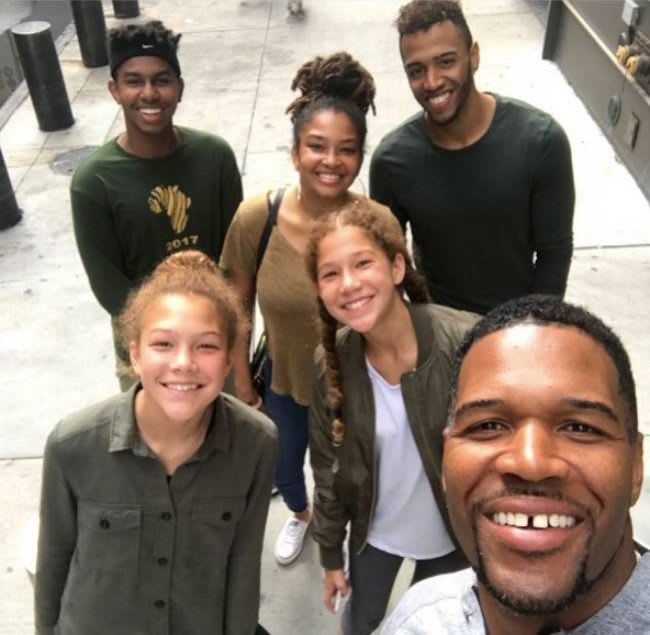 Michael is a doting father and stepfather

Sophia later followed her sister and in July, she also walked the runway for the first time, wearing a KB Swim bikini during the brand’s Miani fashion show.

MORE: Michael Strahan asks for help with underwear dilemma – but fans are divided

Michael shares Isabella and Sophia with ex-wife Jean Strahan. The former sports star is also a father to grown-up children Michael Jr. and Tanita, who he shares with ex-wife Wanda Hutchins.

He is also a doting stepfather to Wanda’s older son Dorian, who often features in family photos with the rest of Michael’s children.