I’m sorry to say that Rebel Wilson and Jacob Busch’s relationship timeline has reached its conclusion. After just about five months of dating in the public spotlight, the actor and the Anheuser-Busch brewing company heir have officially called it quits, and Wilson announced the sad news on Instagram on Feb. 2. Alongside a photo of herself in denim dress and yellow cardigan, Wilson wrote, "Lots on my mind…aghhhhhh…#single-girl-heading-to-Super-Bowl!" The same day, Page Six reported that sources close to the actor believe the relationship had "just run its course." Busch has yet to comment on the breakup himself.

Though dating rumors didn’t start circulating about the two until September 2020, Wilson and Busch reportedly go back further than that. In fact, the two were first linked a year and a half earlier, though the reported sighting was forgotten about after Wilson sparked romance rumors with Jeff Beacher, founder of Beacher Media Group. Eventually, Wilson and Busch found their way back to each other, and though their whirlwind romance has come to an end, it at least seems like the two had a good time while it lasted. Here’s how Wilson and Busch’s short-and-sweet relationship came to be, from their reported first meeting back in 2019.

They Reportedly Went On A Date In March 2019

Back in March 2019, Wilson and Busch reportedly went to see a theater performance of Cats in Hollywood (possibly to get her some inspo ahead of her movie). According to a source for Radar Online, the night at the theater wasn’t their first date, either. "They met through mutual friends at a Hollywood bungalow, like, a month ago and their first date was at Catch restaurant in Santa Monica. She makes him laugh and he cannot get enough of her!" the source reportedly claimed. However, dating rumors fizzled out when Wilson was linked to Beacher a few months later.

They Attended A Wedding Together In August 2020 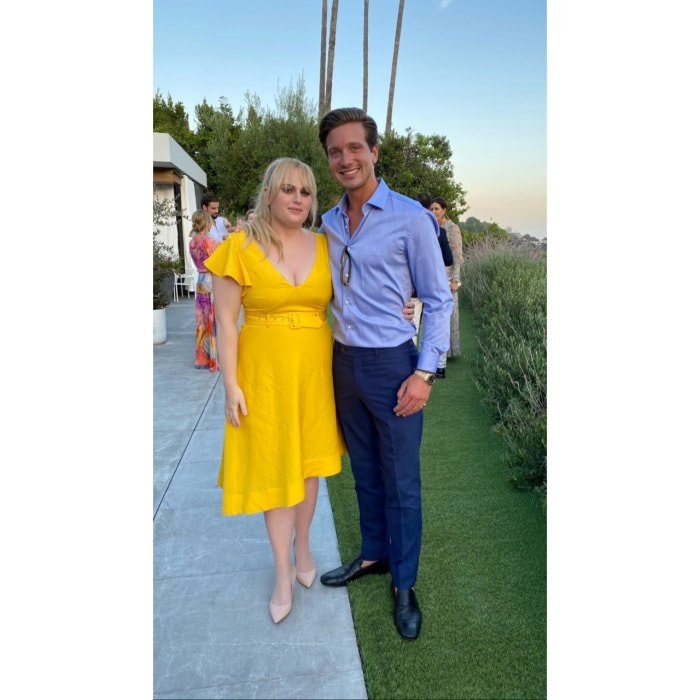 Nearly a year and a half after their first reported sighting, Wilson and Busch attended British TV presenter Carly Steel’s wedding to Jacob Andreou, the vice president of product at Snapchat, in Beverly Hills. Wilson later shared a cute pic of her and Busch from the event in her IG Stories.

They Confirmed Their Relationship In September 2020

A month later, Wilson took Busch as her date to Prince Albert II’s fourth annual Monte-Carlo Gala for Planetary Health in Monaco. Though she didn’t confirm they were an item at the time, a source for People reportedly claimed they were "officially boyfriend and girlfriend." According to the source, Wilson and Busch were reportedly first introduced by a friend in 2019, and they kept up a flirty correspondence while Wilson quarantined in Australia and Busch stayed in Los Angeles during the coronavirus pandemic. Reportedly, the relationship became more serious after Wilson returned to L.A. and reunited with Busch.

A few days after the gala, Wilson seemingly confirmed their romance when she shared a few pics from the event with the caption, "Meeting the Prince with a Prince Charming by my side — what a night to remember in Monaco."

They Took A Trip To Cabo In October 2020

Following their trip to Monaco, Wilson and Busch headed down to Cabo San Lucas, Mexico for a romantic getaway. "Jacob pampers her," a source for People reportedly claimed at the time. "They were just at Las Ventanas in Cabo for a trip that Jacob surprised her with. He loves taking care of her."

Later on that month, the two celebrated their first Halloween together with coordinating costumes.

They Went To Aspen In December 2020

Towards the end of 2020, the two hit the slopes together in Aspen, Colorado.

Wilson Confirmed Their Breakup In February 2021

On Feb. 2, 2021, Wilson shocked fans when she posted an IG caption in which she declared herself a "single girl." Not long after, Page Six reported Wilson and Busch’s relationship had "just run its course," according to sources reportedly close to the actor. Womp, womp.

Here’s hoping these two made the best decision for themselves and for their relationship.