Rob McElhenney, who has made history as the co-creator and star of It’s Always Sunny in Philadelphia, is back on TV with Mythic Quest, another acclaimed series he created and also stars in. Ahead of its return to Apple TV+ on May 7, McElhenney opened up to ET about what keeps him and the rest of the creative forces on It’s Always Sunny coming back after so many seasons and how Mythic Quest fills the current void for workplace comedies.

Easily one the best original series on Apple TV+, Mythic Quest made a strong debut in February 2020 with its salty sense of humor about the video game world. At the center of it is McElhenney’s Ian Grimm (that’s Ian with a hard I), a creative director and egomaniac who often clashes with co-workers, including executive producer David Brittlesbee (David Hornsby), head of monetization Brad Bakshi (Danny Pudi), and lead engineer Poppy Li (Charlotte Nicdao).

While Mythic Quest is inherently about video games, or at least the making of them, it’s actually a workplace comedy, which TV is currently lacking following the recent end of Superstore. It’s also something that McElhenney hopes is reinforced in season 2. “It just so happens that these people work in the video game industry, but we’re hoping that it feels like this is an office,” he says. “Just any office that could be anywhere in the United States or Canada, for that matter.”

And that includes the coronavirus pandemic, which was written into a special, remotely filmed episode, “Quarantine,” that debuted in May. Ahead of season 2’s debut, the series returned with another special episode, “Everlight,” to help close the book on that narrative. “We knew for sure that we wanted to put the pandemic behind us,” McElhenney says. “We wanted to look forward to a more optimistic future, where we didn’t have to talk about viral loads and quarantine and social distancing.”

But he, and co-creators Charlie Day and Megan Ganz, knew that they couldn’t just drop back into a normal world without somehow addressing it. “We would be remiss if we didn’t at least acknowledge the fact that the transition to normalcy is going to be difficult for so many different reasons and so that’s why we made ‘Everlight,’” he notes.

While it allows the ensemble of characters to return to the office with a renewed sense of hope, McElhenney also hopes it resonates with audiences, who are also facing that transition in real life. “So we felt like we wanted to close that door and open up a new one,” he offers. 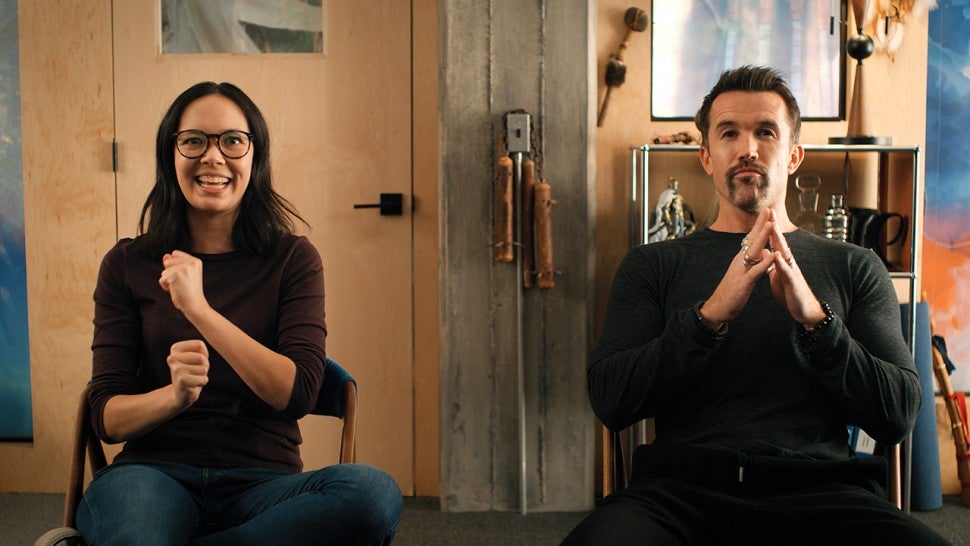 The decision to expand those storylines “was solely because of the actors,” McElhenney says, noting that in the first season they weren’t sure how things were going to progress and what kind of chemistry would exist between characters. “And so in the second season, after looking back at the first season, we realized like, ‘Wow, Naomi who plays Carol or Caitlin McGee who plays Sue, they’re just incredible forces of nature.’ And we have to figure out how to get them back in the show and get them in the show quickly and as often as we possibly can.”

When it comes to utilizing the talents of Ekperigin, who has written for Great News and Broad City in addition to doing standup, there’s a great midseason episode, “Please Sign Here,” that literally puts her at the center of the story, while also playing off the strengths of all the ensemble players as Carol corrals the employees in order to get them to sign an HR report.

“Those bottle episodes are the most fun because it’s just really condensing down to what the heart of the show is, which is a bunch of people in a room talking. And it allows all of us to kind of work together, which is very rare,” McElhenney says.

Mythic Quest’s return also helps fill the void for It’s Always Sunny fans, who have been waiting for a new season since season 14 ended in November 2019. Renewed through season 18, the FXX comedy about a group of narcissistic friends who run an Irish bar in South Philadelphia, Pennsylvania, will become the longest-running live-action comedy series on TV when it returns for season 15.

For McElhenney, “it’s incredibly liberating because it’s just a completely new set of stories that you can tell,” he says of being able to bounce between working on both series.

“The limitations that we have with Sunny is that there’s only so many stories that you can tell with this group of people. And we’ve done a lot of them. So, it’s a challenge for us to continually come up with new stories for them. Whereas with Mythic Quest, when you have a whole fresh set of characters and a whole brand new situation, it becomes so much easier to invent new situations to put them in.” 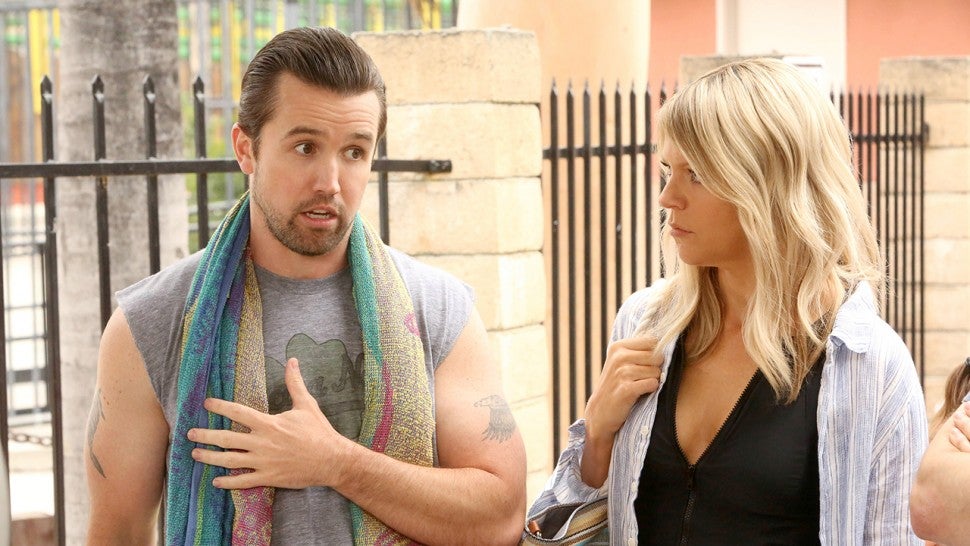 As McElhenney, along with co-stars and writers Day and Glenn Howerton, gets back to work on the series, it’s any wonder how the events of 2020 will play into the series, which has never been afraid to go there with taboo topics and situations, and what the gang finds themselves getting up to.

“The whole point of Sunny is to take popular culture and put it through this very specific and odd meat grinder. That is the point of view of the show and specifically the characters themselves,” McElhenney says. “So when you take the events that happened over this past year, I was just texting with Glenn and Charlie and Megan, and a couple of the other writers and Dave Hornsby, saying, ‘This season’s gonna write itself.’”

In the meantime, McElhenney is not the only one branching out in between seasons of It’s Always Sunny. His wife and co-star, Kaitlin Olson, went on to star on The Mick and appears on the HBO Max series Hacks opposite Jean Smart, while Howerton is the star of A.P. Bio on Peacock and Day continues to pop up in movies.

That time apart “reminds us how fortunate we are to have Sunny to come back to,” McElhenney says. “Those people are my best friends. They’re my family members. And they’re the people who I love spending time with more than almost anybody on the planet. So knowing that I have those set of months set aside, no matter what, every year to come back to and that we can still tell fresh and interesting stories and that there’s still a growing audience of people that continue to come back and watch with us, is truly a privilege that we do not take lightly.”