Rolling Stone stars Mick, Keith and Ronnie in animated display ahead of next leg of tour 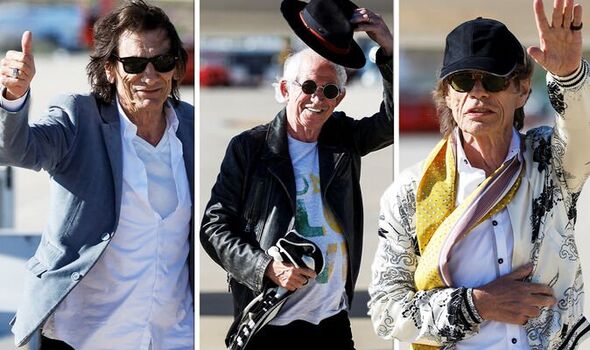 The Rolling Stones could be seen arriving at the Adolfo Suarez Madrid-Barajas Airport, in Madrid, Spain, ahead of their first performance as part of their Stones Europe 2022 tour. Keith Richards, Mick Jagger and Ronnie Wood looked in good spirits as they touched down in the sun-soaked country earlier today.

The trio disembarked from their private jet in style, which featured their band’s logo of a tongue sticking out of a pair of lips.

They made their way down a red staircase and onto the tarmac, laughing the whole way.

Ever the jokester, Mick posed for snaps and at one point posed giving a thumbs-up sign.

The singer sonned a pair of light blue trousers and a classic white shirt which he had thrown under a black and white printed bomber jacket.

He accessorised with a yellow scarf, navy baseball hat and pair of dark sunglasses.

Ronnie and Keith joked with one another as they crossed the tarmac after leaving their private jet.

He donned a worn-in leather jacket, faded t-shirt which he paired with a hat and slim-fit black jeans.

Mick, Keith and Ronnie put on an animated display following their flight

Rolling Stone stars made an entrance in the branded jet

The Stones triotouched down in Spain in style

Keith Richards grinned as he tipped his hat following the flight

Mick, Keith and Ronnie smiled and waved outside of the jet