Ruby Rose has no hard feelings after her Batwoman role of Kate Kane was recast. It was announced over the weekend that actress Wallis Day would be joining the series as Kate Kane.

On Monday, Rose, 35, who abruptly exited the superhero series last May after suffering a serious back injury, took to her Instagram Stories to share her belated congratulations to Day, 26, on the casting.

“I’m sorry I didn’t congratulate @wallisday yesterday… I knew about the casting beforehand and didn’t know when it aired so I forgot to,” the Australian actress wrote. “But I’m stoked for her!”

Captioning a fan’s post honoring Rose’s time on the series, she added, “I’m seeing all the things I’m tagged in with people sad or wondering how I felt… I feel great I have nothing but good vibes.” 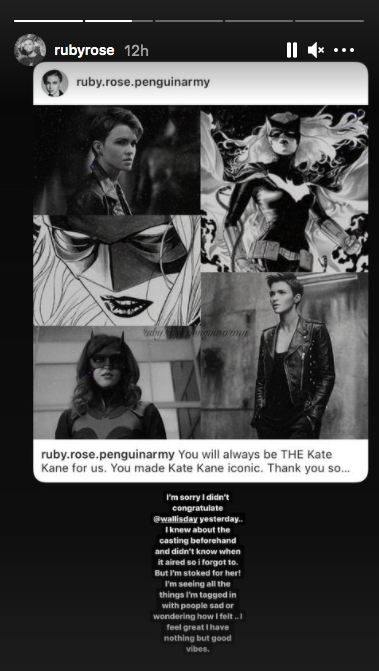 Rose has previously been open about her decision to exit the series after just one season, noting it had to do with her recovery from surgery due to an injury sustained on set as well as the COVID pandemic.

“Being the lead of a superhero show is tough. Being the lead in anything is tough,” Rose told Entertainment Weekly last August. “But I think, in that particular instance, it was a lot more difficult because I was still recovering from my surgery. I had my surgery and then 10 days later I went to work, which maybe wasn’t the best idea. Most people take about a month or three off before they return to work.”

She added the quarantine gave her time to reflect on what she wanted to do and “have a dialogue” with producers.

“I respect them so much and they’ve been so respectful to me,” she said of the creative team behind Batwoman. “I think it was actually a beautiful way to do something, especially since that was the first time it’s ever been done — the first time Batwoman has ever been played in live-action and that she was LGBTQ. I’m very honored to have been able to play her.”

After Rose’s exit, the character of Kate Kane was written off and presumed dead following a plane crash. In season 2, actress Javicia Leslie played Ryan Wilder, a woman who takes on the role of Batwoman. The return of Kate Kane will not affect Ryan Wilder playing Batwoman as she won’t be taking on the mantle of the female superhero.