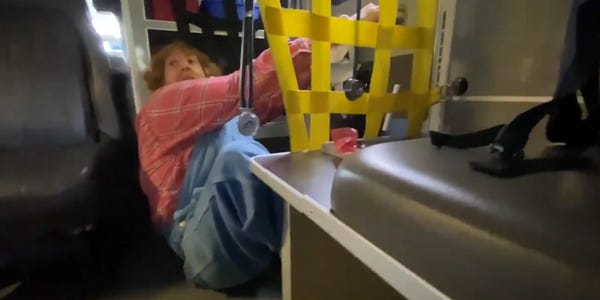 Sacha Baron Cohen has released behind-the-scenes "Borat 2" footage that shows just how dangerous some of his comedic stunts were.

Cohen tweeted the video on Tuesday, writing: "This was not the easiest movie to make."

The footage shows the aftermath of the "March for Our Rights" rally scene, in which Borat (Cohen) impersonates the stage act "Country Steve" at the gun rights meeting.

He then begins to sing "The Wuhan Flu" song, which contained lyrics like: "Obama, what we gonna do? Inject him with the Wuhan flu," while another part of the song suggested that Chinese people made the coronavirus "in a sushi factory."

However, people realized Country Steve was, in fact, a spoof and some of them stormed the stage.

We watch as Cohen walks hastily off the stage and enters his escape vehicle, which appears to be an ambulance. While hiding in there we see him having to hold shut a door as someone is trying to get in. You can hear Cohen say, "Drive, go, go, go," to someone else in the ambulance.

In a recent op-ed for Time magazine, Cohen said he was "fortunate to make it out in one piece."

Cohen first showed the footage on Monday's episode of "The Late Show with Stephen Colbert." After showing the footage he told Colbert: "This is the first movie where I had to wear a bulletproof vest."

He told the late-night host that he had security at the event and when it was realized that Cohen was found out, the team went into action to keep the protestors off the stage.

"One of the guys that stormed the stage went for his pistol, luckily enough there was a very brave guard who leaned in and said, 'It's not worth it, buddy,'" Cohen told Colbert.

"Borat Subsequent Moviefilm," which is available now on Amazon Prime, is the sequel to the 2006 hit comedy "Borat," in which Cohen plays a reporter from Kazakhstan who travels to the US in an attempt to understand American culture. Both movies are done in a mockumentary style with many people on camera with Cohen not knowing they are in a comedy. In the sequel, Borat returns to America to deliver his daughter to Vice President Mike Pence as a gift from his country.

Amazon says the movie has been seen by "tens of millions" of its Prime Video subscribers since it went live last Friday.