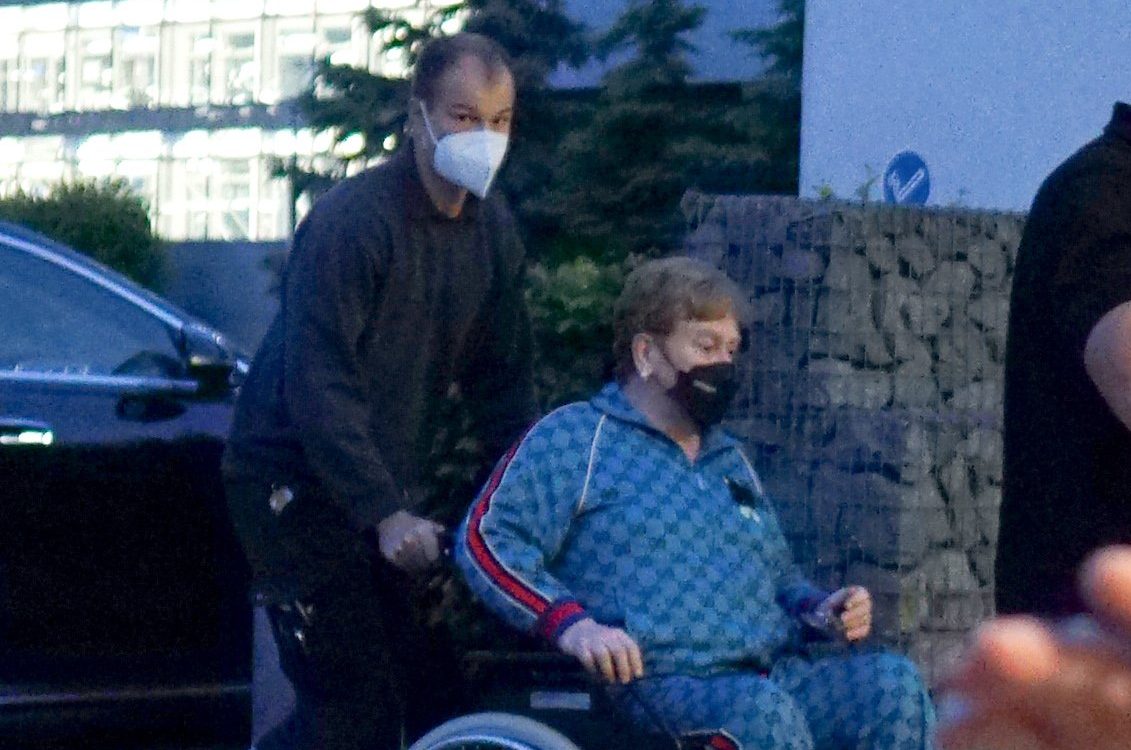 Sir Elton John has been pictured days before he’ll join a star-studded line-up of musicians performing at the Queen’s special Jubilee concert.

The Candle In The Wind singer arrived at Leipzig Airport this week to fly back to his home in Nice on the Cote d’Azur.

During his visit to Germany, Sir Elton had performed two shows, in Frankfurt and Leipzig, on his long-running Farewell Yellow Brick Road tour.

Arriving at the airport, the 75-year-old musician was seen climbing out of a car and getting into a wheelchair before being pushed along by a staff member. Kitted out in a Gucci tracksuit, Sir Elton was giving the red carpet treatment with several security guards flanking him as he was taken inside the airport.

Sir Elton has occasionally used a wheelchair over the past few years, starting when he sprained his ankle in 2019.

During a visit to the Uffizi Gallery in Florence, Italy, the singer said at the time: ‘Not even a sprained ankle could keep me away from seeing one one of the most beautiful museums in the world.’

The Grammy-winning singer has a busy schedule this summer with his tour shows running right through to the end of the year.

This weekend, Sir Elton will also appear in a pre-recorded performance for the Platinum Jubilee concert to celebrate Queen Elizabeth II’s 70-year reign on the throne. Other musicians set to take part include Queen with Adam Lambert, Diana Ross and Rod Stewart.

The Your Song hitmaker was previously announced as a headliner for this year’s BST Hyde Park, which takes place on June 24. Gearing up to the summer concert series, Sir Elton has announced his curated list of performers on the day, set to include Rina Sawayama, Gabriels, Berwyn and Let’s Eat Grandma.

Sir Elton recently resumed his mammoth tour, which began in 2018, following a period of recuperation.

Confirming his return in a recent Instagram post, he told fans: ‘After a restful break at home, I’m ready to get back on the road with my Farewell Yellow Brick Road Tour!’

The Farewell Yellow Brick Road tour will finally conclude on July 8 in Stockholm, Sweden, after which the singer will retire from live performing.

Sir Elton will return to the stage tonight in Bern, Switzerland.