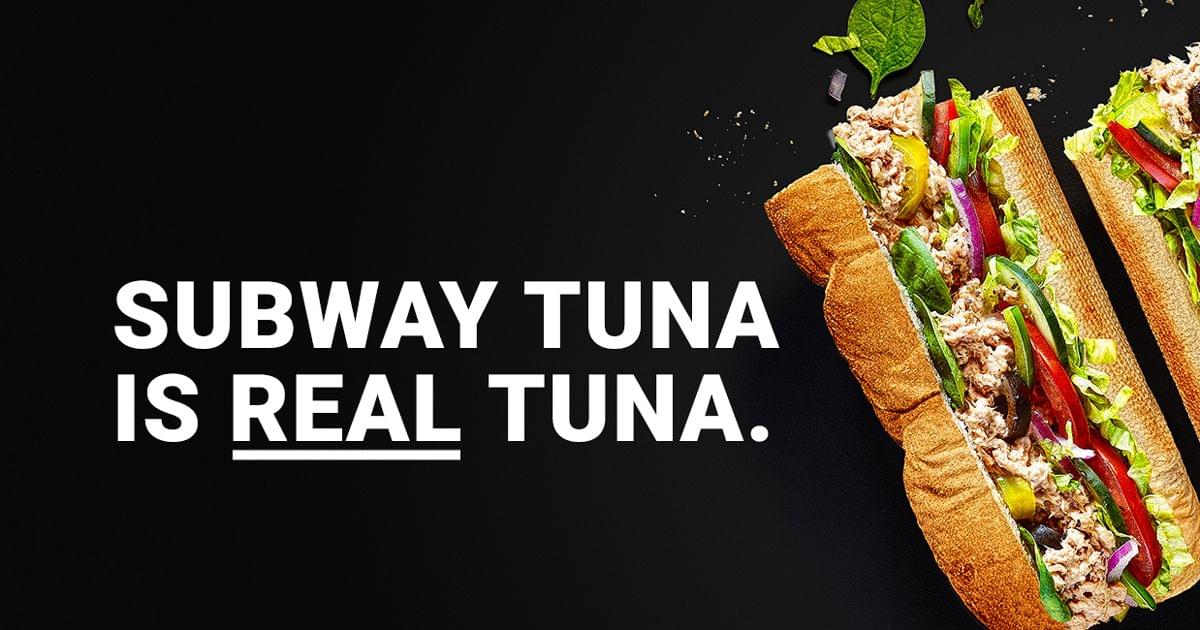 At this point I feel sorry for Subway. In January they were sued in the state of California for allegedly not having real tuna or even fish in their tuna subs. The plaintiffs have since dropped the part of the lawsuit that stated that Subway subs didn’t have tuna in them. The NY Times then published a whole weird expose stating that there was no “amplifiable tuna DNA” in the samples of Subway tuna their lab tested. However the lab did state that it was possible that the processing of the tuna affected their results.

After that, Inside Edition hired a lab which was experienced in testing fish DNA. Their lab stated that Subway’s tuna did have tuna DNA in it and that many labs are just inexperienced in testing cooked fish samples. There’s now this rumor and perception that Subway doesn’t have real tuna in their subs. It’s damaging to their brand and so they’ve started a website to counter it. They state that the tests are inadequate in many cases and that they only use 100% wild caught tuna. You can view it at SubwayTunaFacts and here are a few of the points they make.

Truth: Not true! What actually happened is that the New York Times commissioned a test that couldn’t detect tuna DNA in their sample. According to scientific experts, this is not unusual when testing cooked tuna and it absolutely doesn’t mean the sample that was tested contained zero tuna.

The New York Times test results only show that the type of DNA test done by the unnamed lab wasn’t a reliable way of determining whether the sample was tuna or not. If the test had confirmed the existence of a protein other than tuna, questions could have been raised. However, their “non-detect” conclusion really just means that the test was inadequate in determining what the protein was. In other words, it was a problem with the test, not the tuna.

Still not convinced? Check out USA Today’s independent fact check of the New York Times’ conclusion, which found it lacked important context about the limitations of DNA testing of denatured proteins, and some additional information from food DNA testing firm Applied Food Technologies about why DNA testing isn’t always conclusive in testing processed tuna given the cooking and packaging process breaks down the DNA fragments. The challenge of accurately testing processed tuna DNA has been known for a while, and even studied by scientists.

FDA-regulated Subway importers use only 100% wild-caught tuna from whole round, twice cleaned, skipjack tuna loins. Reclaimed meat and flake are strictly prohibited by our standards. The tuna that Subway guests enjoy is not processed any differently than canned or pouch tuna found in the average supermarket.

It’s also important to note that the word “flake” can be used in two different contexts when it comes to tuna, and this misunderstanding is a matter of semantics. Flaked tuna is not the same as tuna flake. Subway’s tuna product is listed as “Flaked Tuna in Brine” on its labels to describe the preparation of the tuna—specifically the piece size and the texture. It may display differently on the import records, where it appears to be written in short-hand. Subway specifically prohibits the use of any tuna flake, byproduct, or remnants in its tuna.

After that Subway said their tuna isn’t processed any differently than the tuna in the supermarket and they named their tuna importers. Subway’s tuna is good! I eat a lot of tuna and while I know it’s not the healthiest choice due to the fat and calories from the mayo, I still get it. I hope that Subway is able to change the perception that their tuna isn’t real. So many people just read the headlines and then form an opinion. (So many people base their entire life view off memes on Facebook, but that’s a different issue.) I’ve seen this happen over and over again through this job and it’s frustrating. Like I said I feel bad for Subway and hope this helps them clear these misconceptions about their tuna.