They’ve got him on their minds and in their hearts. Teresa Giudice and Joe Giudice’s daughters took to Instagram to pay tribute to their dad in honor of Father’s Day on Sunday, June 16, while he remains in ICE custody amid his deportation battle.

“Happy Father’s Day daddy I love you so much with all my heart! I can’t wait to see you again and I’m so lucky because your my dad like actually my dad and I love you,” the couple’s 10-year-old daughter, Audriana, captioned a video collage along with two heart emojis.

Audriana also shared a sweet message about her uncle Joe Gorga who has been a key player in her life during her dad’s incarceration. “Happy Father’s Day @joeygorga I love you so much your the best uncle ever ever can’t wait to see you today! You are so supportive of me and I love you,” she wrote.

Her sister Milania also shared a tribute to their dad on Sunday. “Happy Father’s Day to my best friend,” the 14-year-old wrote alongside a sweet throwback picture of herself and Joe, 47, on her Instagram Stories. “I love you endlessly buddy.” 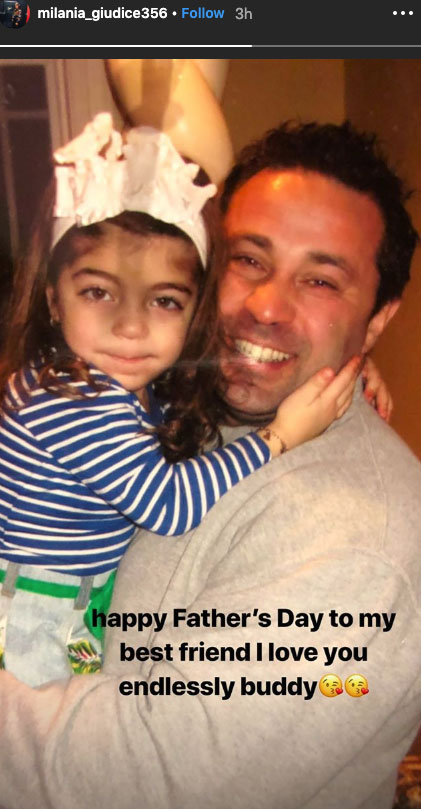 Teresa and Joe’s eldest daughters, Gia, 18, and Gabriella, 15, did not publicly share a message to their father. The Real Housewives of New Jersey star, 47, meanwhile, penned a heartfelt caption alongside her own father, Giacinto Gorga, who has recently battled health issues.

“Happy Father’s Day to my father, you are incredible helping me every single day, bringing the girls to activities, cooking for us & being a constant source of love and support for us all,” the reality star gushed. “We love you today and every day daddy!!”

Joe was taken into ICE custody in March after he was released from jail where he served a 41-month sentence for fraud, including mail, wire and bankruptcy. (Teresa previously completed an 11-month prison sentence in 2015 for the same crimes.)

The entrepreneur — who was born in Italy but has lived in the United States since he was an infant — was ordered to return to the European country during a court hearing in October 2018. In April, Joe’s appeal for his deportation was denied.

“We have filed a stay with the Third Circuit Court of Appeals and will continue to fight to keep Mr. Giudice in the United States, the only country he knows, and reunite him with his wife and four daughters,” attorney James J. Leonard Jr. explained to Us Weekly in April.

Later that month, Teresa and the couple’s four daughters all wrote letters to Judge Ellington asking him to reconsider his decision. Gia also started a Change.org petition asking President Donald Trump to stop Joe’s deportation. It now has more than 97,000 signatures.