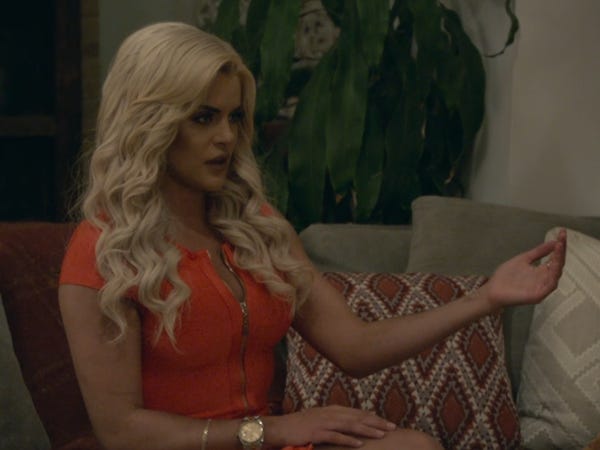 Macy Chanel said after looking back on her participation in "Borat 2," she knew she was just playing a part and that the film's creator, Sacha Baron Cohen, is a "gifted manipulator."

Chanel shows up in the first 20 minutes of "Borat Subsequent Moviefilm," the new mockumentary from Cohen in which he portrays the fictional Kazakh journalist, who wants to offer his daughter to Vice President Mike Pence as a gift from his native country.

In the film, Chanel is an "Instagram Influencer," who Borat (Cohen) has hired to help his daughter, Tutar (Maria Bakalova), learn how to become a "sugar baby" or a younger woman looking to entice wealthy older men.

The sequence, which appears to take place at Chanel's home, involves the social media maven telling Tutar that the best way to be a sugar baby is to be "kind of weak." This leads to Tutar showing that she is actually strong because she can open a beer bottle with her "small hole." She then proceeds to place a bottle under her skirt and open the cap with her behind.

"OK. This is what you're not supposed to do," Chanel responds, telling her that the best thing for her to do is have a complete makeover.

Chanel told Insider in a statement that she was brought onto the movie after receiving a "very well-crafted email," asking if she could help a "foreigner learn the ropes of dating in the US."

She agreed and was flown to Dallas to shoot her scene in a studio, not a house as moviegoers were led to believe.

"They had me sign the longest contract I have ever seen," Chanel said of when she got to the set. "I lacked the resources to review it, but felt that I was dealing with a very professional organization."

Chanel said she realized quickly that it was a comedy and not a real-life scenario. The model and actress said that Cohen was not on set that day and that Bakalova didn't break from her Tutar character until filming wrapped.

"I knew my role so I stayed in character throughout the entire session," Chanel said before adding of her scene partner, "She was very sweet and gave me a huge goodbye."

But Chanel admitted that she felt uncomfortable during some parts of filming, especially when the bottle bit happened. She recalled going back to her hotel room that night thinking, "Wow, what did I sign up for?"

"I'm a Sacha Baron Cohen film fan and he is a very gifted manipulator," Chanel said. "I played the part I was hired to portray, but [was] saddened by the [film's] lack of authenticity. I now know the 'reality' his movies depict."

The actress said she believed filmmakers reached out to her for the role in "Borat 2" because of her previous work with an online dating site created for older men.

"I assume that they cast me in the role of a 'sugar baby' due to my paid appearance in the advertisement for Seeking Arrangement," Chanel said, referring to a video on the relationship site that caters to sugar daddies. On the site, she's featured for having a relationship with "Randy," who is 20 years older than her.

Chanel looks back on the experience as an acting opportunity, she said. And she's certainly not shy of promoting it. She's posted about the movie on her Instagram page, which has amassed a following of more than 88,000 people, and has a link on her page that goes straight to the movie, now streaming on Amazon.

"I have been cast in roles in Hollywood that are not exceptionally flattering and not reflective of who I am as a person in an attempt to promote my career," she added.