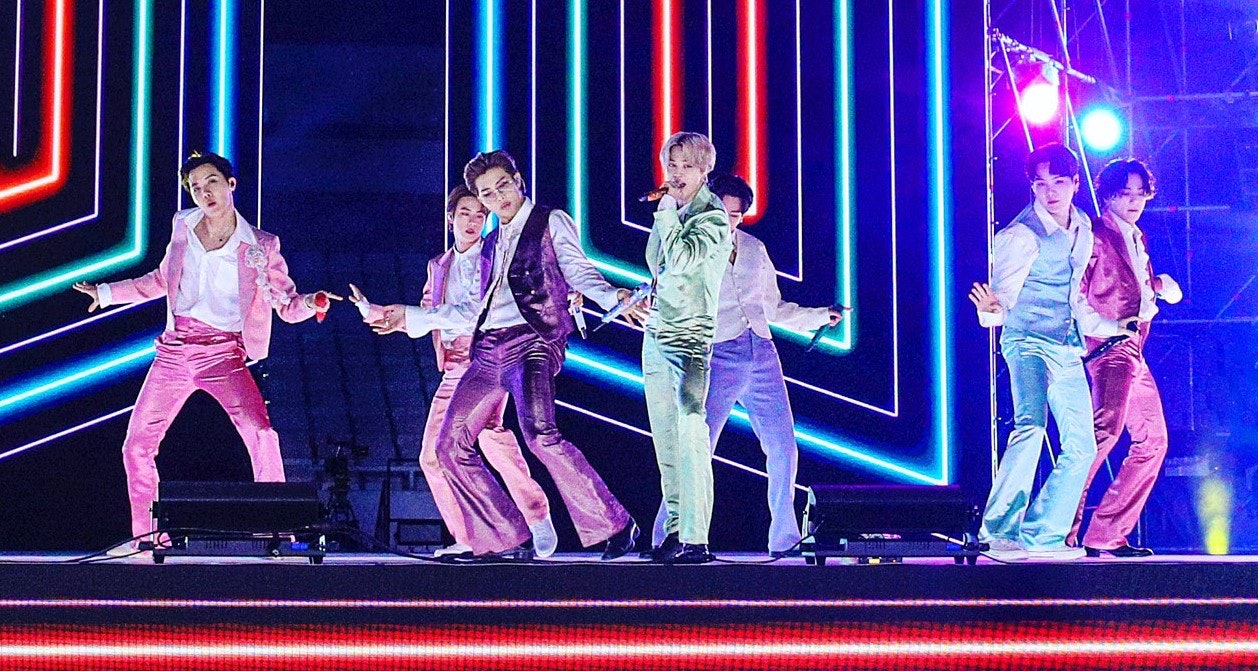 BTS takes performing to the next level. They always try to outdo themselves by incorporating harder choreography and more mind-blowing set designs each time they take the stage. Their end-of-the-year performances also include dance breaks that add to the experience of seeing them live. For the most part, these happen without any mishaps, but after putting on countless performances that get exponentially more complex with each passing year, things like wardrobe malfunctions and technical difficulties are bound to happen sometimes. These videos of BTS messing up and recovering flawlessly prove they’re professionals who never let unexpected moments phase them.

Shortly after debuting in 2013, Suga revealed part of their training was preparing for stage mistakes, so that’s why these incidents don’t affect them so much when they happen. "We practiced a lot while monitoring our performances so I think that’s why people who watch us think that we are really smooth at covering our mistakes. We’ve practiced a lot with props since debut. I thought everyone practiced like that but it turns out it was just us," Suga said following their debut, according to Koreaboo.

Surely, these methods of practicing honed their BTS’ ability to brush off stage mishaps so seamlessly, audiences barely noticed they happened in the moment. But reliving the relatively few moments BTS messed up on stage highlights how exceptional they are, because their ability to recover flawlessly is what makes fans respect them as artists even more.

1. When RM & Jimin Accidentally Ripped Their Shirts Off

ARMYs got quite the surprise during one of BTS’ 2013 concept performances. When RM and Jimin tore off their costume uniforms to reveal their tank tops underneath (at the 1-minute mark in the video above), they ended up accidentally ripping their tank tops in the process. Despite the wardrobe malfunction, RM and Jimin powered through and finished the performance without a hitch. Based on the audience’s reaction, fans didn’t mind the mishap one bit.

2. When J-Hope Tripped & Lost His Shoe

A 2014 performance of "Boy In Luv" didn’t go as planned because when J-Hope executed a jump trick at the 42-second mark, he stumbled and accidentally kicked off his shoe. He didn’t let the incident shake him, however. He literally continued rapping right through it.

3. When J-Hope Lost His Shoe Again

During a 2016 performance of "For You," J-Hope lost his shoe on stage again, but as you’d expect, continued performing anyway. Jungkook noticed and got the shoe back for him, and J-Hope managed to put it back on while still doing the choreo. Now that’s team work!

4. When Jungkook’s Buttons Almost All Came Off

Jungkook’s shirt was literally hanging on by a thread by the end of the boys’ October 2016 comeback performance of "Blood Sweat & Tears." Only one button was keeping his torso from being completely exposed, but Jungkook didn’t let that distract him at all.

5. When Jin Got Hit By Fireworks On Stage

During a 2016 performance of "Blood Sweat & Tears," Jin was hit in the face by fireworks, but he kept it professional by not making a big deal out of it (even though it was a huge deal to fans who noticed). Thankfully, Jin was OK!

6. When Jungkook Started Bleeding On Stage

Somehow, Jungkook hurt himself while performing because he started bleeding from his right hand, but despite his injury, he continued as if nothing happened.

7. When J-Hope Fixed His Mic While Performing at the 2016 AAAs

When J-Hope’s microphone fell out of place, he grabbed it and readjusted it all while continuing the intense "Fire" choreography. Talk about professionalism!

8. When Jimin Slipped On Stage

Around the 2:45 mark in the video above, you can see Jimin slip and fall while performing "Fire." Despite getting the wind knocked out of him, it only took him a few seconds to recover, and the show kept going as though nothing happened.

9. When Suga Forgot The Lyrics To "Ma City"

BTS has hundreds of songs in their discography, so you can’t blame them for forgetting lyrics every once in a while. During their 2017 Home Party event, Suga couldn’t remember the words to "Ma City," so he hilariously bopped his head until his part was over. BTS = comedic legends.

Again, you probably didn’t notice because BTS played it off so easily, but during J-Hope’s verse in this 2017 performance of "Go Go," he accidentally bumped into V, who reacted by making a funny face and then continuing on with the performance.

11. When Jimin Tied His Shoelaces While Doing The "Fake Love" Choreography

Instead of interrupting BTS’ dance practice to tie his shoelaces, Jimin did it while dancing along to "Fake Love." The guys didn’t even notice because he did it so seamlessly while moving across the room. Legend.

Near the 2:19 mark during their 2018 performance of "Fake Love" on Inkigayo, RM went to tug on Jungkook’s shirt, but ended up ripping a button off by accident, leaving his chest exposed! Of course, like the pro he is, Jungkook ignored it and kept the show going!

13. When Jungkook Fixed His Mic While Performing At The 2018 MAMAs

Jungkook realized his microphone wasn’t working while performing "Fake Love" at the 2018 Mnet Asian Music Awards, so he adjusted it himself, all while not missing a beat during the choreo.

14. When Suga Started Dancing Too Early

Around the 0:16 mark of this 2018 performance of "No More Dream," you see Suga start dancing at the same time as J-Hope. He quickly realized he did the move too early because he was supposed to do it with V, so he just repeated it. You wouldn’t even notice unless you know BTS’ choreo by heart (which many ARMYs admittedly do).

15. When V Slipped On Stage During "Anpanman"

At their 2018 Citi Field concert, V tripped and fell on his back while performing "Anpanman." Even though it looked like it hurt, V just laughed it off and got back to performing.

16. When Jimin Had To Improvise During BTS’ 2019 MMA Performance

One of BTS’ backup dancers didn’t pull up Jimin’s chair on time during their "Dionysus" choreo, so Jimin made it seem like he was sitting to not draw attention to the slip-up like a pro. ("Dionysus" starts near the 31-minute mark in the video above.)

Jin had an unfortunate stage accident at the 2019 SBS Super Concert, but he quickly got to his feet with help from Jimin and finished the "IDOL" performance anyway.

18. When Jimin’s Jacket Went Over His Head During BTS’ NYE Performance

Toward the end of BTS’ "Boy With Luv" performance during Dick Clark’s New Year’s Rockin’ Eve 2020, Jimin accidentally flung his jacket over his head while dancing, but he played it off like it was a joke. It made for one cute AF live television moment.

19. When V’s Button Popped Off

V was going so hard during BTS’ March 2020 performance of "ON" on Inkigayo that he lost a button while dancing. Since he carried on with the choreography like usual, a lot of fans didn’t even notice something went wrong.

In another blink-and-you’ll-miss-it moment, V accidentally kicked J-Hope in the face while performing "Black Swan" on The Late Late Show With James Corden. Most fans didn’t notice because J-Hope didn’t let it affect his performance. (Watch it happen near the 2:30 mark in the clip above.)

These videos of BTS messing up and recovering flawlessly are the definition of "the show must go on," because the guys always give fans an amazing performance no matter what.