Australian actor Travis Fimmel is probably best known for playing Ragnar Lothbrok on History Channel’s Vikings, but he was once one of fashion’s biggest superstar models — and he made it there wearing next to nothing. Which major campaign did Fimmel land, how does he feel about his time modeling now, and what did he say he’d be doing if he could afford it? 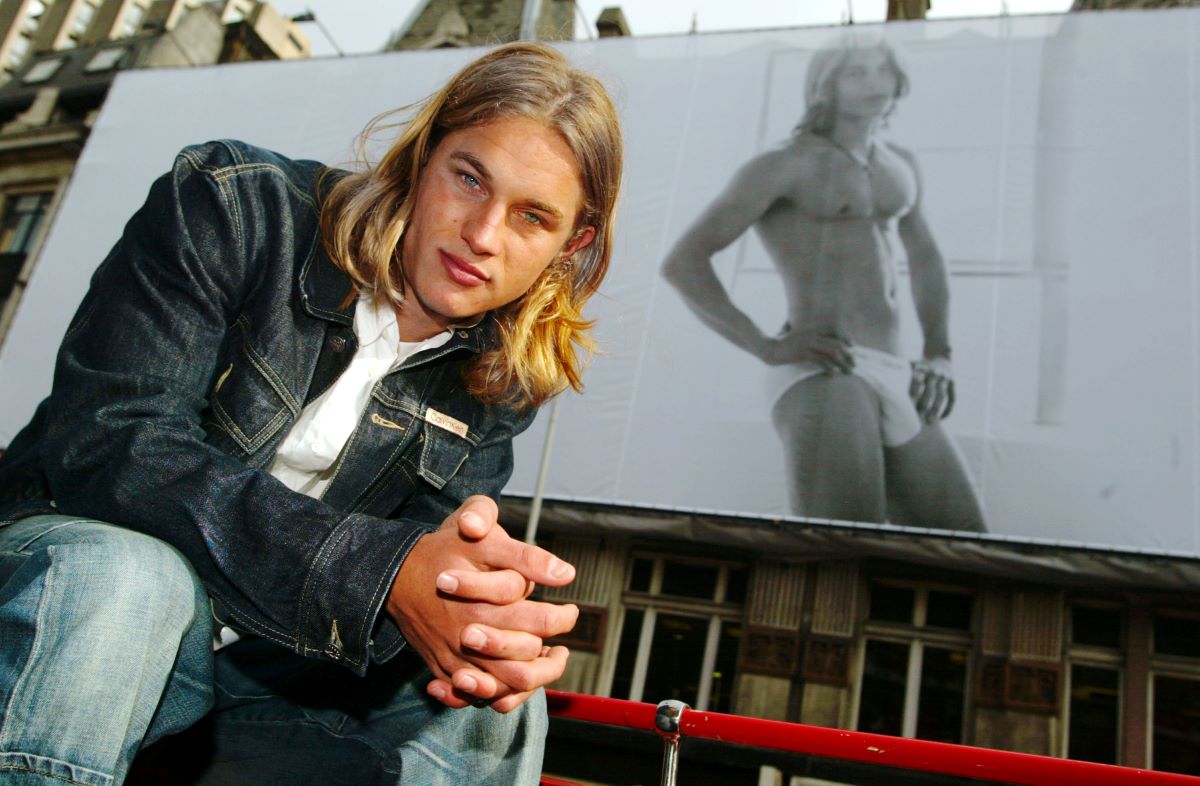 After moving to L.A. from Australia, Fimmel met and scored a major modeling contract with Calvin Klein. “I found him in a poolroom. He looked like James Dean at the time,” Calvin Klein once recalled for Interview. “He walks into my studio, into my office, and it was like drop-dead.”

Klein knew right away that Fimmel would be something special in the modeling world. He said, “His presence was jaw-dropping. I called Steven Klein right away and said, ‘Don’t do anything. Just put him in the underwear and put him up against the window.’”

And as Klein instructed, images of Fimmel in nothing but white Calvin Klein underwear were plastered on billboards that supposedly caused major traffic jams. One rumor claims the advertisement in London was taken down because it was such a disruption. Another entertainment industry rumor is Fimmel’s campaign inspired the creation of Sex and the City’s Smith Jerrod — Samantha’s fan-favorite model boyfriend.

Something that is definitely true is that People magazine named Fimmel one of the world’s sexiest bachelors in 2002. But by 2009 he had turned his focus to acting and now he’s a bit of a hesitant hottie when it comes to his modeling past.

“I just did that modelling thing to get a visa over here,” he told GQ. “It’s really embarrassing mate, but what am I gonna do – not get a visa and make money?”

With a starring role on HBO’s Raised by Wolves and a spot acting alongside Jensen Ackles in Rust, Fimmel seems glad to be away from modeling. He’s admitted he doesn’t even like performing that much. “I had no ambition to do it,” Fimmel told The New Yorker. “I still don’t.”

“I cannot audition to save my life,” he explained. “I hate it. I could never be in a play, onstage. I’d break down and cry.”

He’s also said that he would be a farmer in his homeland of Australia instead of living on a ranch outside of Los Angeles if he could. He told GQ, “I don’t love living in town. I’d rather be home. I hopefully won’t be doing it for too much longer. I just want to make a bit of money and get home.”

“If I had the money, I’d have been home two years ago,” he explained. “You need a fair bit of money now to get a big farm in Australia – it’s so expensive. Unbelievably expensive. I’d love to be back – but I’ll be here for a few more years.”

But just because Fimmel moved on from his modeling days doesn’t mean fans have forgotten. A Twitter search of “Travis Fimmel Calvin Klein” will produce tons of opinions from over the years. “This packaging used to be all over the underwear section of department stores,” one Twitter user pointed out in 2021 along with pictures of Fimmel from the campaign.

Travis Fimmel is a builder

While biding his time until he can move back to Australia, Fimmel is renovating his ranch in the U.S. “I’m fixing it all up. The shed. Renovating the house. Putting up fences,” he told GQ. “I’m down to doing exterior stuff – the trees, building stuff on the deck.”

“I enjoy doing that stuff,” he shared. “I enjoy seeing nothing there, doing it, then seeing something that wasn’t there before.” So, while he may be looking forward to getting back to his homeland and putting his Calvin Klein days as far behind him as possible, it sounds like he’s getting pretty comfortable on his ranch in the U.S for the time being.

Fans surely hope he gets his dream farm in Australia. But it can’t be said for certain they don’t want to see him in his underwear again to get there.