What Is The Real Meaning Behind Meghan Markle’s Pinky Ring?

Meghan Markle was someone who turned heads with her sense of style even before she was introduced to the world as Prince Harry’s girlfriend. Of course, the moment she became a household name, it didn’t take very long for fashionistas on both sides of the pond to fall in love with her favorite pair of Birdie’s flats, Everlane tote bags, or the sensible pair of Veja sneakers she wore during a royal engagement in Sydney, Australia with Prince Harry by her side. Speaking to Glamour back in 2017, Meghan said that her California roots have definitely shaped her personal style over the years. “On a normal day, I love a shift dress with flats and a little cropped jacket,” she shared about her go-to style. “That for me is my travel wear if it’s not too chilly – you can throw a scarf over your legs if it’s cold on the plane!”

And while the Duchess of Sussex is a fan of minimalist and monochromatic style, she’s also got an accessory game that a lot of people have been keeping their eyes on. In fact, there’s a meaning behind the pinky ring that she’s often seen wearing in public. Here’s what you need to know.

Meghan Markle sticks with her commitment to meaningful fashion 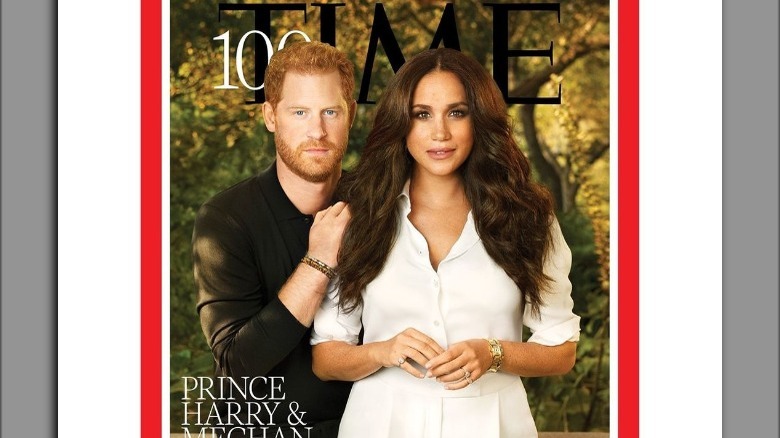 Meghan Markle appears on the cover of Time Magazine with her husband, as they’ve just been named one of the most influential couples of 2021. And while that’s an honor that’s certainly worth boasting about, it’s what’s on Meghan’s pinky finger that everyone is talking about. According to People, Meghan is wearing Shiffon’s Duet Pinky Ring. It has a small diamond beside a bigger one and is supposed to be a symbol of women supporting and empowering one another. The jeweler is committed to donating half of their profits to female empowerment grants. “Each piece of jewelry you invest in is paying it forward to invest in another woman and a more equal future,” says a statement on their site. The company is also committed to using diamonds that “are ethically sourced and follow conflict-free and socially responsible practices.”

And while the Duchess of Sussex may think that her style is a simple one, it’s certainly an impactful one, as everything she wears has a deeper meaning — like her commitment to wearing ethical and sustainable fashion — or message. Now that’s the kind of trend anyone can get behind.