It sounds like Tiffany Trump is gearing up to head down the aisle and thinking about her upcoming wedding. As fans will already know, the daughter of former President Donald Trump and Marla Maples confirmed her engagement on January 19, one day before her father and famous family said bye bye to the White House.

Tiffany shared the exciting news on Instagram alongside a photo of herself and her fiancé, Michael Boulos posing together outside the famous building. “It has been an honor to celebrate many milestones, historic occasions and create memories with my family here at the White House, none more special than my engagement to my amazing fiancé Michael!” she wrote in the caption. “Feeling blessed and excited for the next chapter!” she added, alongside a red heart emoji.

Boulos shared the same photo on his Instagram account, telling his followers that he “Got engaged to the love of [his] life!” after two years of dating. He also added that he was “looking forward to [their] next chapter together,” with a ring and red heart emoji.

Just like Tiffany, Boulos comes from a wealthy business family, so it’s safe to say their wedding is probably going to be a pretty lavish affair. But how’s all the wedding planning going? Read on for what we know about their big day. 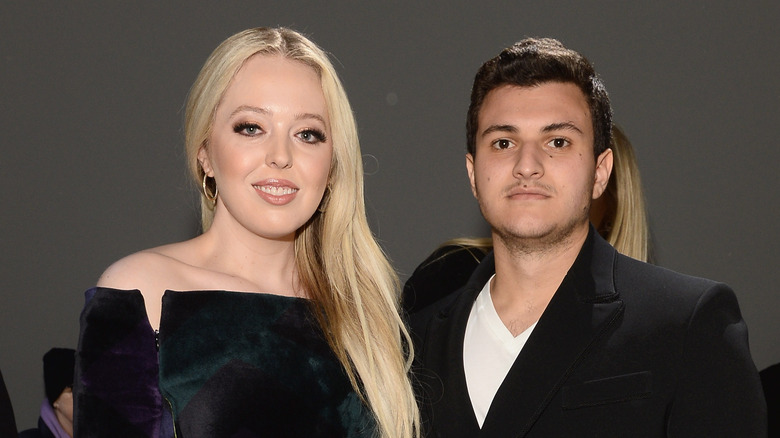 Tiffany Trump and Michael Boulos could be gearing up for two weddings set to take place in “the near future,” according to a report from Page Six. An insider claimed that Tiffany has reportedly “been waiting to plan a very big wedding” that will see “their friends from around the world” fly in.

That’s where the potential second ceremony would come in, as it’s been suggested the star could tie the knot sooner rather than later and have another wedding once travel restrictions ease a little more. It’s thought Boulos will likely want to fly a lot of guests in from Nigeria, where he grew up.

Very much in keeping for a wedding for one of Donald Trump’s children, the source also claimed that Tiffany’s big day “is truly going to be the big, glamorous, dream wedding” while describing it as a potentially “huge international affair.” As for where at least one of the ceremonies will take place, it’s thought Miami could be the prime location as Tiffany and her fiancé have been spending much of their time in the Sunshine State since Donald Trump left the White House.

Tiffany doesn’t yet appear to have spoken publicly about her plans for her big day herself, so it seems like, for now, fans will have to watch this space.