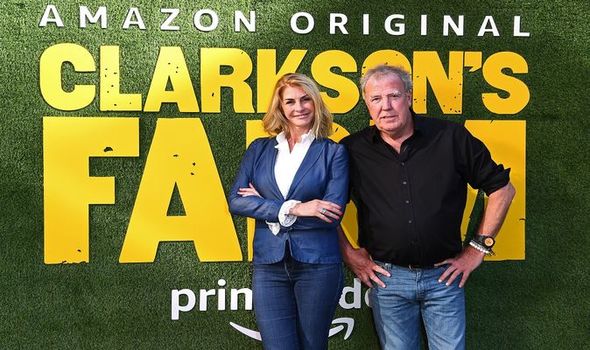 He sent a video “thank you” to the National Farmer’s Union after winning the accolade. In his acceptance speech, Jeremy said: “It feels really weird. I’ve never even been nominated for a Bafta in 30 years of being on television. And now I don’t want a Bafta anymore. I’ve achieved everything! This is great, honestly. I’m so glad so many people enjoyed the show.”

It comes after millions watched his hit Clarkson’s Farm series, which followed the star’s struggles on his 1,000-acre Diddly Squat estate in the Cotswolds with his girlfriend Lisa Hogan, 48. Amazon Prime viewers lapped up his comic, no-nonsense approach and a second series is on the way.

Jeremy described it as “a love letter to the British countryside”. The ex-Top Gear presenter, 61, has been a strong supporter of the NFU’s call for food self-sufficiency not to slip below 60 percent. He wants the Government to push it to 80 per cent. His win was announced at the Grosvenor House Hotel in London on Thursday.

NFU President Minette Batters said: “When it comes to recognising someone who has done their best to showcase British food and farming over the past 12 months, no one has earned this award more than Jeremy Clarkson.

“It’s been such a challenging time for British farming over the past 12 months; our farmers have kept shelves stocked with British food and dealt with extreme weather. Now, they are battling labour shortages, supply chain disruption and rising costs, which are causing severe problems for essential food producing businesses. Through all this, Jeremy has been a vocal champion.”