Fans were beginning to worry about Whoopi Goldberg after she missed six episodes of ‘The View,’ but she made her grand return on June 29 and explained why she was M.I.A.

Whoopi Goldberg opened up the June 29 episode of The View by explaining why she had been missing from the show in the week prior to the live taping. “Yes, it’s me, I’m back,” she said. “I was out because I was dealing with something called sciatica, which is basically a bulging disc in your back and it impacts the sciatic nerve, which sends pain down your leg. I’m telling you, it was like a bad boyfriend. A bad boyfriend who came back to mess with me!”

Whoopi went on to explain just how painful her symptoms were, and revealed how she finally found relief. “There I was, trying to move my leg — impossible to do,” she admitted. “It was really horrible. But I’m glad to be here. I have a walker, which kind of freaked me out. I didn’t know that I needed it. But, you know what? My first step with the walker….this is my new best friend. I’m just gliding along. So that’s what happened to me. I’m told that it comes out of nowhere.”

Joy Behar revealed that she, too, had previously suffered from sciatica, and gave Whoopi some advice. “It’s very stress related and I think stretching the legs helps a lot,” Joy urged. “But it’s something that comes from stress. Be careful of that.” Joy also told her co-host that she looked “great” and “rested,” which Whoopi attributed to her hospital stay. “What can you do? I’m laying in the hospital room,” she explained. “I’ve turned into this little old Black lady. It’s really strange.” 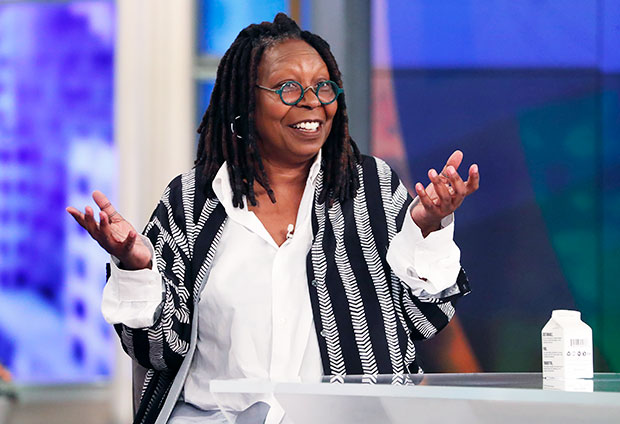 Before her June 29 return, Whoopi had been missing from The View since June 21, with no explanation as to her whereabouts at first. However, on June 24, her co-hosts filled fans in a bit. “Whoopi is out again today with her sciatica problem,” Joy said during that episode. It wasn’t until five days later, though, that Whoopi broke her silence about the situation.

This is not the first time that a scary health situation has kept Whoopi from hosting The View. Back in 2019, she missed five weeks of filming due to a horrendous case of pneumonia, during which she nearly died. She was able to return to the show in March of that year, but even by July, she still wasn’t 100 percent better. “It’s going to be awhile before I’m back 100%,” Whoopi admitted at the time. “I’m very, very lucky to be alive.” She added, “The doctor told me, ‘You are really sick. You are this close to dying. In my mind, I wasn’t that sick. I hope that this is a cautionary tale for people. You have to take the time to take care of yourself.”