Why Gigi Hadid Is Making A Plea To The Press

Gigi Hadid seems to have settled into motherhood seamlessly. The model, who shares a 9-month-old daughter Khai with One Direction’s Zayn Malik, announced her pregnancy in August 2020 — just one month before the baby was due. Taking to Instagram, Hadid shared a black-and-white picture of herself flaunting her pregnant stomach in an-all white dress, along with the caption, “growin an angel.” Then, on September 19, 2020, the couple welcomed baby Khai, as Hadid gave birth at her rural home in Pennsylvania, per Page Six.

A few months after their daughter arrived, the supermodel decided to honor her with a brand new tattoo. In February, during a “Vogue” beauty tutorial, Hadid revealed new ink on her arm, featuring “Khai” written in Arabic. In the same language, “Khai” means “the chosen one, royalty or nobility.”

Over the past few months, Hadid has sporadically posted photos with baby Khai, with the newborn’s face strategically hidden. Recently, however, the supermodel has issued an important message to the press when it comes to her child. Read more below. 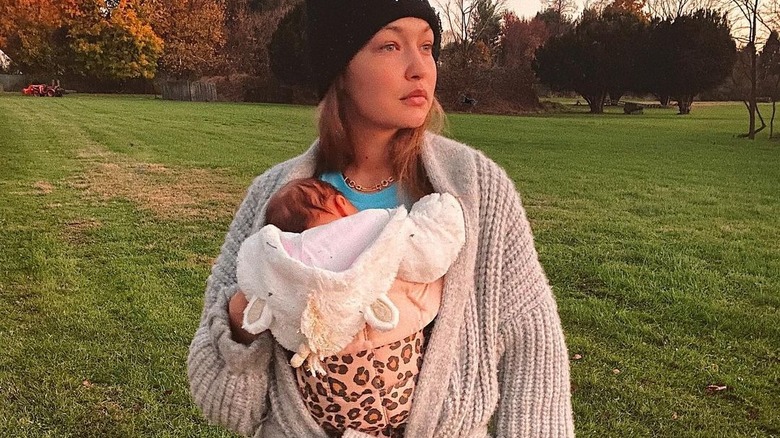 For Gigi Hadid, preserving her and Zayn Malik’s daughter’s privacy is super important. Taking to social media, the new mom has shared a note directed to the media, paparazzi, and fan accounts, asking them to blur Khai’s face out of any photos. “As our baby grows up we have to realize that we can’t protect her from everything the way we wanted to and could when she was smaller,” Hadid explained on her Instagram Story (via People). “She loves seeing the world! And although she gets a lot of that out near our farm, she also gets to experience other places — a true blessing.”

Then, the model went on to explain that, during their most recent visit to New York City, Khai has started to lift the stroller’s shade, which makes preserving her privacy all the more difficult. “It would mean the world to us, as we take our daughter to see and explore NYC and the world, if you would PLEASE PLEASE PLEASE blur her face out of the images, if and when she is caught on camera,” she pleaded.

Towards the end of her note, Hadid also thanked those photographers who are already respecting her boundaries. “Thank You’ to those paparazzi who have been so respectful, since I asked them to keep a distance while I walked with the stroller, since my first trip to NYC with Khai,” she said.