With so many Christmas movies to stream this season, which ones are quality nuggets and which are lumps of coal? 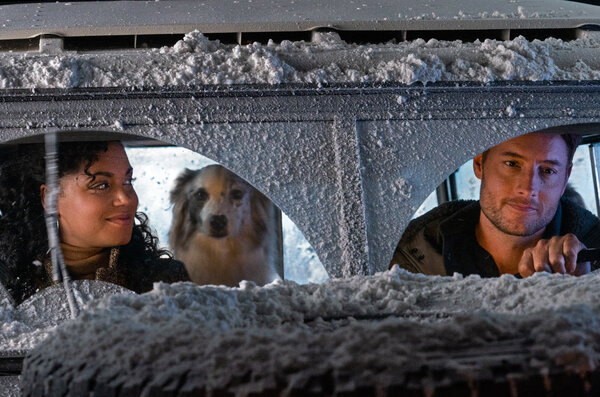 Welcome back to the wonderful, self-contained world of holiday movies, where we do not smirk at the improbably high number of handsome widowed fathers; we accept the fact that every other person is a best-selling writer, a pop star, a princess or a baker; we applaud the frequent blizzards that force two hotties to spend time together; and we root for the big-city dweller discovering the joys of country life.

This year, the major streaming platforms haven’t come up with any new Christmasterpiece — well, there is a terrific new song lurking, so read on — but there are still some nuggets alongside the inevitable lumps of coal. Here is a non-exhaustive roundup of new features.

Stream it on BET+

BET+ is moving into the holiday market big time, and Robin Givens’s food-centric comedy is among the highlights. The Miles family has long been obsessed with its church’s holiday cook-off, and the three daughters (Nadine Ellis, Porscha Coleman and Candace Maxwell) have now picked up the whisk from their late mother. This season will be more hectic than usual, though, thanks to the influencer-next-door (Kara Royster) entering the contest. And she can cook, despite having a phone glued to her hand. Each sister gets a romance — including a matter-of-factly lesbian one — and the shenanigans are entirely adult and nice, which is rather refreshing. Even the influencer turns out to be sweet!

Violet Pierce (Violet McGraw) is such a keen sleuth that when her best friend’s genial dad is accused of stealing their town’s precious jingle bells, she immediately sets out to right this outrageous perversion of justice. Never mind that Violet is only 11 and that the sheriff (Eddie Cibrian) is her dad who, understandably, doesn’t approve of his daughter breaking into the station’s computer. “A Christmas Mystery” is the rare family-friendly holiday movie with a restrained approach to saccharine, and McGraw is endearing in the treacherous role of a pint-size know-it-all. This could easily be the beginning of a franchise.

The original Ralphie, Peter Billingsley, returns in this sequel to the beloved 1983 movie. The nostalgia needle has moved from 1940 to 1973, with Ralphie, older but not much wiser, dragging his family back to his Indiana childhood home for the holidays. The set design is a marvel of 1970s oranges and browns, and it’s always a pleasure to see Julie Hagerty (as Ralphie’s mom). But sadly, Clay Kaytis’s movie is a slog. The voice-over narration, once irresistible, has become nonstop blather and the set pieces (including a triple-dog-dare on a ski jump) are just not funny. There are plenty of opportunities to ponder some enduring questions: Why is good slapstick so hard to pull off? When will anybody admit that barflies spending the holidays glued to a dive’s counter aren’t heartwarming?

The Oscars aren’t until March, but the campaigns have begun. Kyle Buchanan is covering the films, personalities and events along the way.

Remember that reference to blizzards and widowers? It was a little something called foreshadowing. Here, the blizzard forces a pop star, Angelina (Aimee Garcia), and her assistant (Zenzi Williams) to crash in the humble abode of a widower named Miguel (Freddie Prinze Jr.). They had decided on the spur-of-the-moment visit because Angelina had been charmed by a fan video posted by Miguel’s daughter, Cristina (Deja Monique Cruz). The clincher is that our singer is in need of new material and Miguel just happens to be a gifted songwriter. The movie’s best trick, however, is to combine two big celebrations: Christmas and Cristina’s quinceañera. Win-win.

With Vanessa Hudgens taking a break from seasonal fare, Lindsay Lohan steps into the fray. In her first lead role in almost 10 years, Lohan plays the perfectly monikered Sierra Belmont, a hotel heiress still looking for her purpose. After an accident on the slopes, Sierra is struck with amnesia and ends up in a ski lodge owned by Jake Russell (Chord Overstreet), the inescapable widower with a cute kid. Lohan leans a little too hard on the comedy at first, but she locks into a groove as Sierra learns one valuable lesson after another and finds her true calling. More, please.

After starring in two Bay Area-set “California Christmas” movies, Josh Swickard moves 400 miles south for this sluggish meta-comedy. Jessica (Jessika Van) is a director specializing in holiday TV movies, and she’s in the middle of shooting her latest feature on a Los Angeles lot when her new boss, Christopher (Swickard), tells her he’s shutting down her pipeline for budgetary reasons. It doesn’t help that Jessica wants to stick to seasonal formulas and Christopher thinks Christmas movies are just not complex enough — an argument raised by no network executive ever. Spoiler alert: He will come around.

When her vintage VW van breaks down after almost hitting a wandering alpaca … You’re already hooked, right? Aspiring singer Gail (Annelise Cepero) gets stranded in the kind of charming small town that only exists in holiday movies. Fortunately, the local mechanic, Jeremy (Jeremy Sumpter), is a sweet guy and, best of all, his mother is played by Brooke Shields. Gail becomes the new music teacher and her romance with Jeremy unfurls in a satisfyingly predictable manner. (Did Jessica from “A Hollywood Christmas” direct this? No, but Lauren Swickard, Josh Swickard’s wife, co-wrote it.) The movie’s secret weapon: “This Is Christmas,” a terrific country ballad co-written by Mary Steenburgen. If anything on this list deserves to become a Yuletide classic, it’s this song.

Jake (Justin Hartley, of “This Is Us” fame) and Rachel (Barrett Doss, “Station 19”) have smoking chemistry in this polished effort from the “Father of the Bride” director Charles Shyer, making “The Noel Diary” the best romance and possibly even the best movie of this bunch, period. He is a best-selling writer, while the most important line on her character sheet is that she is looking for her birth mother. As if this weren’t enough, the freakishly perfect Jake has an unbearably cute Australian shepherd named Ava who comes along for the ride when the two gorgeous humans embark on a road trip through a fantasyland Northeast in the middle of winter. In a self-aware nod to its genre, “The Noel Diary” boasts a great two-step joke about how many rooms are left at an inn when a pair of incredibly attractive people show up without a reservation.

It takes a little while to get over the fact that all those classy British and Irish voices — Olivia Colman, Luke Evans, Jessie Buckley, Jonathan Pryce — are paired with some of the most garish animation in recent memory. A hopped-up yet grindingly slow adaptation of Dickens’s ubiquitous holiday classic, the movie incorporates old Leslie Bricusse songs from his “Scrooge” musical, as well as three new numbers. The most welcome surprise is that Scrooge’s dog doesn’t talk or sing. Thank God for small mercies.

Stream it on Apple TV+.

Yes, it’s another musical version of “A Christmas Carol.” Will Ferrell’s Ghost of Christmas Present leads a supernatural special-ops team (Sunita Mani kills as Past) that tricks unredeemable people into changing their ways. Their latest target, Ryan Reynolds’s Clint Briggs, proves extremely unwilling to budge, though. For most of the movie, Ferrell looks unsure as to whether he should play this straight or not, but Reynolds is all in as a sleek dude described as “the perfect combination of Mussolini and Seacrest.” He can move, too. While it outstays its welcome by a good 30 minutes, “Spirited” nails more jokes than strictly required, and the splashy musical numbers land. Mission accomplished.