‘Amsterdam’ Review: A Madcap Mystery With Many Whirring Parts 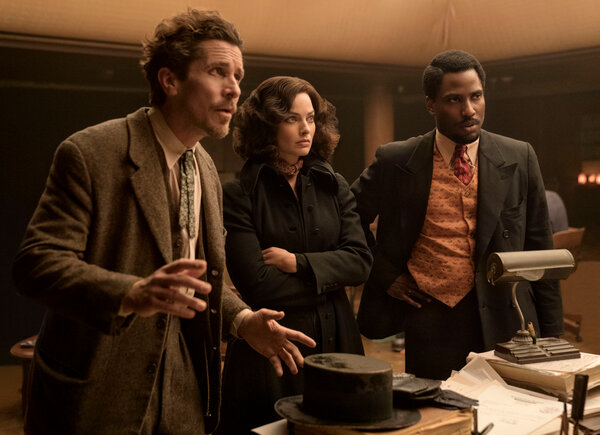 For much of “Amsterdam,” the latest David O. Russell Experience, the movie enjoyably zigs and zags, rushing here and there, though sometimes also just spinning in place. It’s a handsome period romp, a 1930s screwball pastiche filled with mugging performers who charm and seduce as they run around chasing down a mystery, playing detective, tripping over their feet and navigating an international conspiracy that is best enjoyed if you don’t pay it too much attention — which seems to be the approach that Russell himself has taken.

Like all of Russell’s movies, this one is by turns loosey-goosey and high strung. At its center are three American comrades who met in Europe during World War I, formed a tight friendship and — as you see in an extended flashback — lived for a while in Amsterdam, where they recovered (more or sometimes less) from the war and rhapsodically played bohemians until reality called them back home. A dozen or so years and much personal drama later, it’s 1933, and the three have settled into their respective lives. And then Taylor Swift pops up in a fetching hat and red-alarm lipstick, sending everyone and everything scrambling.

The pieces click into place with Burt (Christian Bale), a down-and-out doctor with dubious habits who announces that he lost an eye in France. That’s also where he met a nurse, Valerie (Margot Robbie), and found his best friend, Harold (John David Washington), now a lawyer with a healthy practice and endless patience. Soon, the men are roped into an intrigue via Swift’s Liz, one of those mysterious dames who always stir up trouble. Her father has died under suspicious circumstances, and she’s enlisted Harold for help, which is why Burt soon performs an autopsy alongside Zoe Saldana’s Irma, another Florence Nightingale.