“Look, it actually got a great response,” Bakish said of hurricane horror film 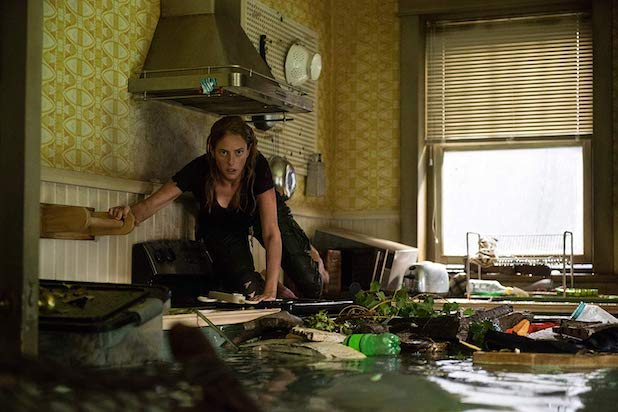 “It’s about an alligator and a hurricane and a daughter that goes looking for her father in a flooded house. Look, it actually got a great response.”

That’s how Viacom CEO Bob Bakish, speaking to a packed house at the Paley Center for Media last month, described the premise of Paramount Pictures’ latest release “Crawl,” which hits theaters this weekend.

The crowd laughed, but Bakish is high on “Crawl” and what the film represents for Paramount’s strategy moving forward as the studio looks to ascend back to the mountain top — or at least a peak.

“Crawl” earned $1 million at the box office in early Thursday showings, which put it ahead of Fox’s Dave Bautista and Kumail Nanjiani-led action-comedy “Stuber.” The hurricane horror film, produced by Sam Raimi and directed by “The Hills Have Eyes” (2006) and “P2” filmmaker Alexandre Aja, is the kind of film Paramount plans to focus on in the future.

“We are in the early stages of restoring Paramount’s truly iconic status and that starts, as [Paramount CEO Jim Gianopulos] says, making films for everyone… And films that are made for someone,” Bakish said during the Paley Center event. “Like the ‘Crawl’ film that we’re going to release [July 12], which is low budget… It looks pretty good. So I think there’s really a range of opportunities to segment the market. We’re also making films direct to the streamers space and certainly, as we get that slate up and running and build the business, there’s probably other opportunities.”

“Crawl” stars British actress Kaya Scodelario (“Skins,” “The Maze Runner”) as Haley, a young woman who, while attempting to save her father during a Category 5 hurricane, finds herself trapped in a flooding house and must fight for her life against alligators.

The film, which cost $13.5 million in production costs according to Box Office Mojo, is projected by the studio to earn in the $10 million range in its opening weekend. It’s earning comparisons to 2017’s shark survival thriller “47 Meters Down,” which opened to $11.2 million after earning $735,000 in Thursday previews. That film, which cost just $5.3 million in production costs, grossed a total of $44.3 million at the box office.