In the new Netflix adaptation of “Ma Rainey’s Black Bottom,” it’s a sweat-slicked summer day in Chicago 1927 and everybody wants something. White music-industry bigwigs want a new recording from the indomitable Ma Rainey (Viola Davis), a Southern singer dubbed the “Mother of the Blues,” and they want it fast. Her ambitious trumpeter, Levee (Chadwick Boseman), is desperate to put a contemporary spin on Ma’s old-fashioned songs, hoping it will launch his own career.

And what does Ma want, after she’s arrived late to her recording session, caused a commotion on the street and sized up the pleading music men who now swarm her like gnats?

Well, for starters, she wants a Coke. So where the hell is it?

Adapted from the 1984 August Wilson play by the director George C. Wolfe and the screenwriter Ruben Santiago-Hudson, this new take on “Ma Rainey’s Black Bottom” will arrive Dec. 18 on Netflix, though much has changed since the film was shot last year. In August, the 43-year-old Boseman died after a private battle with colon cancer; Levee is his final role.

“He did a brilliant job, and he’s gone,” said Denzel Washington, a producer on the film. “I still can’t believe it.” 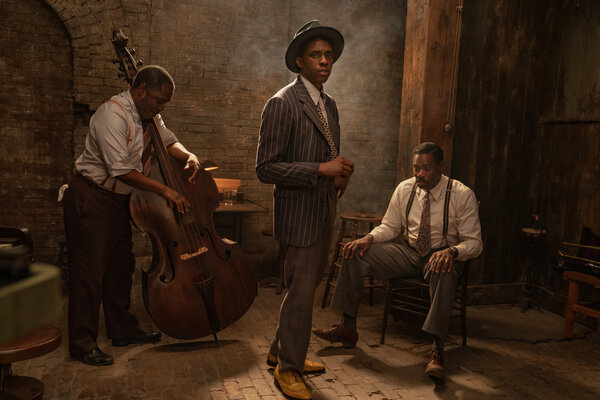 Moreover, after a summer of racial reckoning for the country, Wilson’s tragic story of Black Americans navigating a rigged system has become only more relevant. “How can you move forward,” Wolfe said, “when you’re still haunted by the past?”

“Ma Rainey’s Black Bottom” is the second film adaptation of a Wilson play produced since 2015, when Washington was entrusted by the Pulitzer Prize winner’s estate with bringing his work to the screen. The first, “Fences,” was directed by Washington and won Davis a supporting-actress Oscar; next, Washington hopes to assemble his son John David Washington, Samuel L. Jackson and the director Barry Jenkins for an adaptation of Wilson’s 1987 play, “The Piano Lesson.”

“The greatest part of what’s left of my career is making sure that August is taken care of,” Washington said.

But when Washington and Wolfe first went to Davis to play Ma Rainey, the actress was hesitant. Though she was a two-time Tony winner — for her 2001 performance in Wilson’s drama “King Hedley II” and her role in the 2010 Broadway revival of “Fences” — Davis had never played a diva quite like the real-life blues singer Ma Rainey, and wondered if she even could.

“I thought of 50 other actresses before I thought of myself,” Davis said. “She’s unapologetic, and that extends to her body and the way that she dresses. And trust me — as Viola, in my life, I don’t do that.”

With her eyes caked in black makeup, her teeth encased in gold, and her breasts often spilling out of her dress, Ma cuts a striking figure. “It’s Black Southern Kabuki,” said Wolfe, who drew inspiration from the chorus girls at the Apollo Theater who used to shadow their faces with watered-down shoe polish. “I was just fascinated by how Black performers of a certain period invented a kind of style and look and glamour.”

It’s meant to be a lot, and for Davis, it really was. “It was work to just own all of it,” she admitted.

Still, once she committed to the role and left all her inhibitions at the door, embodying Ma Rainey was “fan-friggin-fantastic,” she said. “I reveled in her, I swished my hips every day. There was such joy in that freedom of expression.” And her character’s self-confidence also taught Davis another valuable lesson: “I have to remember that I don’t have to barter for my worth. I was just born with it.”

Fittingly, the production was engineered around Davis’s busy schedule: it was shot in Pittsburgh last year during the summer hiatus of her ABC series, “How to Get Away With Murder,” and all of Davis’s scenes were filmed first so she could return to production on the show’s final season. Though the second-billed Boseman was then at the peak of his fame, having just come off a Triple Crown of box-office blockbusters in “Black Panther,” “Avengers: Infinity War,” and “Avengers: Endgame,” Davis described her late co-star as the ultimate collaborator.

“A lot of actors mistake their presence for the event,” Davis said. “An actor of Chadwick’s status usually comes on and it’s their ego who comes on before them: This is what they want, this is what they’re not going to do. That was absolutely, 150 percent off the table with Chadwick. He could completely discard whatever ego he had, whatever vanity he had, and welcome Levee in.”

The role will be a revelation for fans who know Boseman only as the stoic superhero T’Challa. He brings an electrifying physicality to Levee, whether he’s wrestling with a past full of trauma, seducing Ma’s girlfriend, Dussie Mae (Taylour Paige), or tearing into a pair of monologues that culminate in Levee raging at God. Shot through with movie-star charisma and practically assured of Oscar recognition, it is Boseman’s finest screen performance.

Davis said she had no idea what Boseman was struggling with while he shot the film. “I’m looking back at how tired he always seemed,” she said. “I look at his beautiful, unbelievable team that was meditating over him and massaging him, and I now realize everything they were trying to infuse in him to keep him going and working at his optimal level. And he received it.”

But though Levee’s thwarted ambitions will probably take on an even more tragic grandeur after Boseman’s death, Davis encourages the actor’s fans to focus more on the cultural truths Boseman meant to convey.

“I think a lot of times, people look at someone’s life backwards,” she said. “Now we have the unfortunate knowledge that Chadwick succumbed to cancer at 43, but really, Levee represents so many Black men living in America. What we’re constantly navigating on a day-to-day basis is the trauma of our past — we’re trying to heal from it, we’re even trying to understand that it’s there, and we’re negotiating that with our dreams and who we want to become.”

To Davis, that is what remains so meaningful about Wilson’s work, where everyday Black people were finally afforded the scale and specificity to become the sort of tragic heroes who were long embodied by white men in theater.

“Now we know that the role mirrors Chadwick’s life, but if that were omitted, it still mirrors his life in a way,” Davis said. “Because it mirrors the life of every Black person grieving, and especially the life of a Black man.”