‘Fox and His Friends’: Fassbinder’s Tale of Bad Romance

Not simply a great filmmaker, Rainer Werner Fassbinder (1945-82) was an imposing physical presence. I vividly remember a stocky, scruffy, leather-clad figure, flanked by an entourage, striding across the lobby of Alice Tully Hall for a New York Film Festival news conference in the late 1970s.

The German auteur — a wildly prolific wunderkind whose sardonic melodramas served to re-establish German cinema on the international stage — appeared at once affable and menacing. It was an affect far different from the one he chose a few years earlier for his movie “Fox and His Friends” (1975). Not quite 30, the director cast himself as a working-class hustler, boyish and naïve, who performs in a traveling circus as Fox the Talking Head. After winning a lottery jackpot of 500,000 marks (roughly $1 million these days) he loses his head to love — shamelessly exploited by a bourgeois male lover, Eugen (Peter Chatel), who takes his money while berating him for not using a dessert fork.

As a portrait of class relations, “Fox and His Friends” is not subtle. (Fox’s real name, Franz Biberkopf, is a reference to the victimized proletarian antihero of Alfred Döblin’s great novel “Berlin Alexanderplatz.”) But the film is no less affecting for that. Fassbinder avails himself of blunt Brechtian political allegory as well as his knowledge of the Hollywood melodramatist Douglas Sirk, particularly Sirk’s use of interior décor to comment on his characters’ emotional states. Every object in the frame is precisely placed to drive the point home. The mood of acrid self-pity is further reinforced by the occasional use of Leonard Cohen’s melancholy dirge “Bird on the Wire.”

Fassbinder once wrote that Sirk’s films convinced him that “love is the best, most insidious, most effective instrument of social control.” So it is with “Fox.” The movie’s title could have been that of a subsequent film “I Only Want You to Love Me” — precisely Fox’s motivation as he lends money to bail out Eugen’s father’s business, as well as buying (and furnishing) an apartment, a new wardrobe and a fancy car.

“Fox” evokes the cruelty of a dog-eat-dog world. A major scene is set in Marrakesh, where Fox has taken Eugen on vacation. The two men pick up a Moroccan (El Hedi Ben Salem, the male lead in Fassbinder’s “Ali: Fear Eats the Soul”) and take him back to their luxury hotel only to be informed that Arabs are not allowed. Of course, after the Moroccan is escorted out, the desk clerk offers to send a hotel employee to their room. Love is a commodity; social class is absolute. The idea that West Germany might also be a sort of colony is introduced by the presence of two American soldiers whom Fox vainly attempts to hustle.

Despite its outrageously downbeat ending, “Fox” was promoted at the 1975 New York Film Festival as a daring display of “homosexuality without tears” — presumably because the movie is so matter-of-fact in representing its gay milieu. Four decades ago, “Fox” was something of a novelty, as was Fassbinder, perhaps the first openly gay or bisexual filmmaker of note since Jean Cocteau.

The New York Times critic Vincent Canby, an important supporter of Fassbinder’s work, chose not to review “Fox,” first shown as “Fist-Right of Freedom”; the movie was dismissed in The Times by Richard Eder as “a ‘Blue Angel’ done in drag.” When “Fox” opened commercially in New York it was at the Waverly (the same Greenwich Village theater where, two months later, “The Rocky Horror Picture Show” appeared), with the word “homosexual” prominently used in its ads.

Positioned as a niche film, “Fox” caused controversy. Some critics and activists took offense at Fassbinder’s depiction of gay life or, more precisely, his use of a gay milieu to make fresh a familiar story of sexual exploitation. Discussing “Fox” before it went into production, Fassbinder made no mention of his main characters’ sexual orientation, blandly describing it as the story of “a young entrepreneur whose company is on the verge of bankruptcy, and who manages to trick money out of someone to save the firm.” When “Fox” had its premiere at the Cannes Film Festival, he maintained that “homosexuality is shown as completely normal,” adding that the “problem” is social inequality and it’s “something quite different.”

Hollywood movies like “The Killing of Sister George” or “The Boys in the Band,” are told from an outsider’s perspective. “Fox” is not. Fassbinder’s on-camera presence in virtually every scene gives the film a confessional aspect. Still, if “Fox” is a psychodrama, Fassbinder is playing a role. That he did not see himself as the character Fox may be gleaned from the movie’s dedication to his real-life lover, Armin Meier, and “the others.” A few years later, Fassbinder and Meier, who soon after committed suicide, played themselves, as bully and abject partner, in Fassbinder’s contribution to the 1978 anthology film “Germany in Autumn.”

Fassbinder gave himself cameos in a number of films including his superbly insolent second feature, “Katzelmacher” (1969). Here, as in “Fox,” he appears as an underclass pariah — a sullen Greek immigrant worker in Munich. The director also starred in other people’s films. Trim and 25, he plays a loutish, charismatic poet in Volker Schlöndorff’s TV adaptation of Brecht’s expressionist play “Baal”; scarcely a dozen years later, squeezed into an incongruous leopard skin suit, the mature, paunchy Fassbinder starred as a police detective in Wolf Gremm’s punk science-fiction satire, “Kamikaze ’89.” The film was released shortly after his death, at age 36, apparently of a drug overdose.

Reviewing “Kamikaze” in 1983, Canby wrote that its focal point was “Fassbinder’s easy, neo-Wellesian control of every scene in which he appears — a control that has as much to do with wisdom as with weight.”

“Fox and His Friends,” “Katzelmacher” and “Baal” are all available for streaming from the Criterion Channel; “Kamikaze ’89” streams from Film Movement Plus. 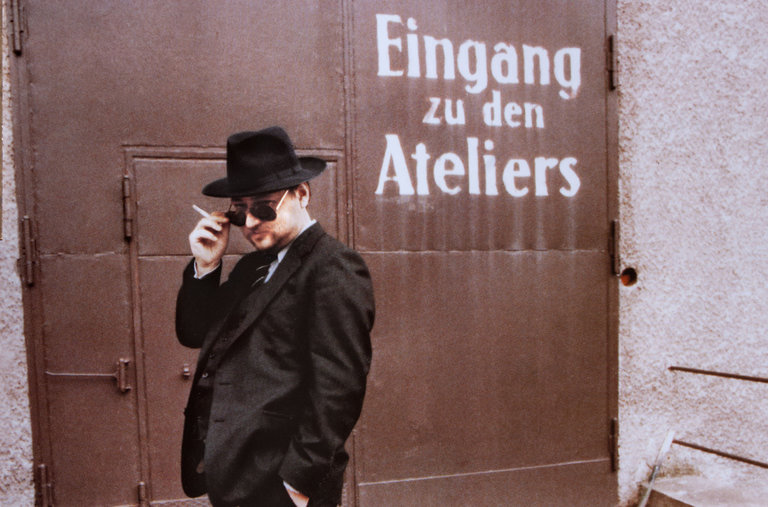