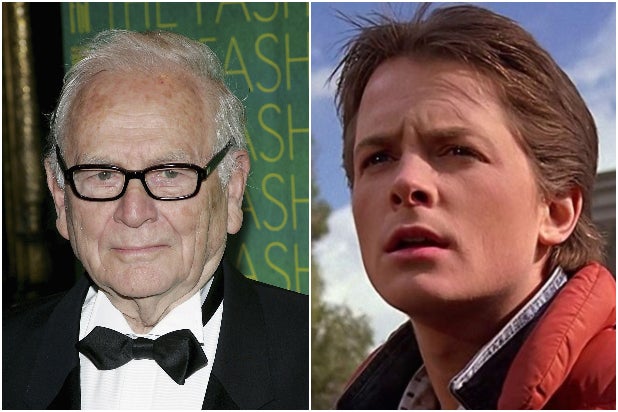 As the world mourned the passing of legendary French fashion designer Pierre Cardin, a handful of people paid tribute by posting photos not of him but of … Marty McFly?

Yes, you may stumble across a “RIP Pierre Cardin” tweet with a picture of Michael J. Fox from “Back to the Future.” And if you’re an American seeing that, we assure you Fox is alive and well.

Pierre Cardin is the name that pops up in the French version of Robert Zemeckis’ “Back to the Future.” In the scene where Marty wakes up in his mother’s bedroom after he’s traveled back in time to the 1950s, she reads the name on his underwear and believes that he’s “Calvin Klein,” and he starts going by Calvin for much of the film. In the French dub however, the future Mrs. McFly reads his underwear and thinks he’s “Pierre Cardin.” Check out the scene in French below:

The Cardin reference fortunately works just as well as the Calvin Klein one does for American audiences, because although Cardin founded his own line in 1950 and even created the bubble dress in 1954, his innovations in licensing didn’t necessarily make him a household name until the 1960s.

Cardin’s work has touched film in other ways, as he also was the costume designer on Jean Cocteau’s classic 1946 film “Beauty and the Beast,” and he frequently worked with Jeanne Moreau on other films throughout the 1960s.

Cardin died at the American Hospital in Neuilly-sur-Seine on Tuesday, his family said, according to Agence France-Presse. He was 98.

See some of the other tweet responses involving Cardin and “Back to the Future” below: