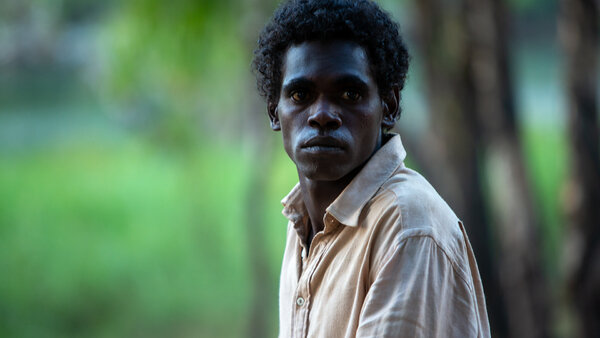 This outback western, set in Australia’s Arnhem Land in the Northern Territory, begins in 1919, depicting a brutal massacre of a group of Indigenous people known as Yolngu. Above the killing fray is a rifleman named Travis (Simon Baker), a member of the party of white people encroaching on the land. The group below has gone against the mission — Travis was supposed to be the only member of the party authorized to shoot — so he descends from his defensive position and tries to save the Yolngu. One surviving Indigenous witness is a young boy named Gutjuk (Jacob Junior Nayinggul).

Directed by Stephen Johnson from a script by Chris Anastassiades, “High Ground” is not the narrative of Black suffering and a white savior that its opening might suggest. Rather, it’s a story of two characters from different worlds coming to terms with their circumstances.

Several years after the massacre, Travis is enlisted by the military to track down an Indigenous warrior, Baywara, who’s organizing attacks against whites at train stations and other locales. As it happens, the boy he rescued years before is Baywara’s nephew. Originally named Gutjuk, he has been adopted by Christian missionaries and assigned a new name. He’s played beautifully by Nayinggul, whose sensitive, alert and tensed-up performance is a substantial reason to give this movie the benefit of the doubt.

Travis enlists the teenager as a tracker in his hunt, and promises he’ll do whatever he can to bring Baywara in alive. And he teaches Gutjuk to shoot, from the “high ground” of the film’s title.

Civilization, one of Travis’s military commanders tells him, consists of “bad men doing bad things, clearing the way for those who follow.” Travis has his own reckoning with those bad things. And his charge, Gutjuk, has his own reckoning with identity, discarding his Westernized name almost as soon as he starts riding with Travis. While not as powerful as the 1978 Australian picture “The Chant of Jimmie Blacksmith,” this movie makes a solid case as both a statement and an action picture.