How will a Hollywood boycott affect the Georgia film industry?

Georgia is facing a major challenge: Hollywood studios are threatening a boycott after the passing of a law that would ban abortions after six weeks. The Living Infants Fairness and Equality (Life) Act, stipulates personhood be reclassified as “an unborn child with detectable human heartbeat”, and could go into effect in January 2020, if it is not struck down in court, threatening a multibillion-dollar industry.

A boycott of Georgia, whose film industry has been a cornerstone of the state’s economy for over a decade, was first widely floated by the Charmed actor Alyssa Milano. The Georgia governor, Brian Kemp, who claimed victory in 2018’s contested gubernatorial race, told the Georgia GOP convention: “We value and protect innocent life – even though that makes C-list celebrities squawk.” Those who answered Milano’s call to boycott include stars such as Natalie Portman, Alec Baldwin, Kerry Washington and Lena Waithe. The Writers Guild of America East and West also oppose the law, calling it “draconian” and telling Georgia representatives its implementation would make the state “inhospitable” for its members.

In recent years, Georgia has hosted several blockbuster productions such as Black Panther, Avengers: Infinity War, and the Hunger Games franchise. By August 2018, the film and television industry generated $2.7bn in direct spending and $9.5bn overall, with a record 455 productions taking place in Georgia. According to the Motion Picture Association of America, Georgia’s film and television industry created more than 92,100 jobsand generated nearly $4.6bn in wages. In a statement provided to the Guardian, the Georgia department of economic development’s film office said: “Georgia continues to be the most advantageous place in the country to create compelling stories. Not to mention, we have the best-designed tax incentive program that has stood the test of time and is here to stay.”

The office’s representative did not answer questions on the potential boycott.

Georgia’s film industry is booming in part because of the aforementioned generous incentive, a 20% tax credit, with some earning as much as 30%. Since its introduction in 2008, several studios have relocated or created flagships in Georgia, like Pinewood Studios. Many Marvel movies were produced there, including Captain America: Civil War, Ant-Man, and Spider-Man: Homecoming and their future productions, such as The Eternals starring Angelina Jolie are slated to be filmed in the state, although a spokesperson for the film’s director, Chloé Zhao (who directed the award-winning drama The Rider), denied she is shooting anything there. Melissa Silverstein of Women and Hollywood explained that the new law opens up an opportunity for other states: “People went to Georgia because they had really great tax incentives. Maybe this is an opportunity for another state to step up and put in some tax incentives.” 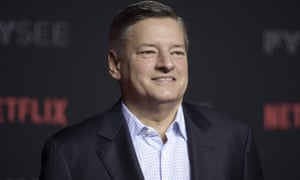 Netflix’s chief content officer, Ted Sarandos, was the first in the industry to speak on the matter, telling Variety, “Given the legislation has not yet been implemented, we’ll continue to film there, while also supporting partners and artists who choose not to. Should it ever come into effect, we’d rethink our entire investment in Georgia.” The streaming giant has filmed Ozark and Stranger Things there.

Following Netflix’s announcement, Bob Iger, the Disney chief, said: “I think many people who work for us will not want to work there, and we will have to heed their wishes in that regard.” The next day, Warner Media and CBS & Showtime gave similar statements, insisting their productions would probably not continue to be made in the state if the law went into effect.

Meanwhile, some productions have already been pulled out, like those of Kristen Wiig and the Handmaid’s Tale director Reed Morano. The Broad City star Ilana Glazer also pulled a production in opposition over the law. On a recently released clip from Hasan Minhaj’s Patriot Act, she said it affected her mental health: “I’m, like, paralyzed and depressed over it.” Glazer explained: “Doing a movie in any place, or you know, film and TV is like such a huge advertisement for the city and for the state that it’s in, and I just don’t want to be there and support it.

Many people feel boycotting would inevitably punish the people and workers of Georgia. Amy Nicholson, a film critic for Variety, told the Guardian: “I think [a boycott] is a hard way [to protest] because it does affect the local people but sometimes, I think it’s the only way. Sometimes, it feels like money is the only thing that does the talking in America.”

Even so, there are calls for Hollywood productions, despite the legislation. The Oscar-winning production designer of Black Panther, Hannah Beachler, tweeted against the boycott: “Don’t boycott Georgia! Leaving comes from a place of privilege. Stay, donate, help fight w/ the women & children. Give to orgs. FIGHT 4 the people, fight against this bill. Don’t abandon those who need us most. Govt. want u 2 go, by design. & when u go they’ll do worse.”

Former gubernatorial candidate Stacey Abrams also urged people to stay. After tweeting she supported “the right of every American to exercise their values through economic protest”, she asked the entertainment industry to reconsider, adding: “I do not believe it is the most effective, strategic choice for change.” 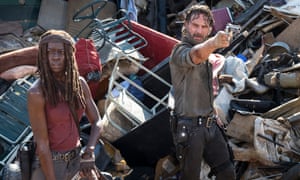 There are currently 32 productions being filmed in Georgia, including three commissioned by Netflix and AMC’s The Walking Dead. Women and Hollywood’s Silverstein said: “There’s a lot of money that comes in now from the entertainment industry to Georgia and it is a tool to use to show the people who signed this bill that many people do not agree with it and will not be putting their money, their time into a state that doesn’t support women’s reproductive freedom.”

She acknowledges a complete removal would be a costly decision. “The infrastructure that they’ve invested in Georgia is something that is very hard to walk away from. There are studios down there now. This is not an easy decision, in terms of money that it’s going to cost people when they walk away. But this is a time in our country where you have to take the hard stance.”

Governor Kemp seems unfazed by the clamor for a boycott, but a scheduled visit to Hollywood in May was cancelled and instead he toured the in-state Georgia Film Academy. His former opponent Abrams has been championing a #StayandFight campaign and has been formally invited by the Hollywood executive Nina Tassler to discuss further possibilities in Los Angeles.

Conservative policy has threatened production in Georgia before. In 2016, several companies threatened to abandon the state if the “religious liberty” bill was signed into law. It was subsequently vetoed by the then governor, Nathan Deal.

Nicholson sums up the situation this way: “There will come a point where, if enough companies already take a stand and say, ‘We don’t want to do business there’, then it puts more pressure on the companies remaining to have to make a choice.” Hollywood, she says, is willing to travel. Despite Kemp’s petulance, the possibility of a film-less future for Georgia is quite real, says Nicholson. “It’s not impossible that they really will carry through on this threat.”