In Need of a Film About Romantic Possibility? Try ‘In the Mood for Love’

Moments into “Days of Being Wild,” the second feature from the Hong Kong director Wong Kar-wai, a smooth operator flirts with a woman working at a concession stand. He asks her to look at his watch for one minute — and when the 60 seconds are up, he tells her why: “April 16th, 1960, one minute before 3. We were here together. I’ll always remember that minute because of you. From now on, we’re one-minute friends.” Like it or not, she’ll remember that minute, too.

As a pickup, the line is a bit cringey, but it’s a great scene because it distills Wong’s method: Here is a filmmaker who specializes in making the evanescent tangible, in capturing fleeting emotions in a style that is always poetic, often ravishing and, despite his films’ surface-level dreaminess, unerringly precise.

Fairly or not, the influential Wong himself has a reputation for struggling to set things in stone; in 2004, his “2046” arrived so late to the Cannes Film Festival that, Wong told me in an interview a few years later, the movie started unspooling before the ending was in the projection booth. But his movies are now frozen in place in a virtual retrospective that started this week at Film at Lincoln Center, and will expand to benefit other theaters on Dec. 11. They can be streamed nationally, and seeing them in these new director-approved scans is as close as pandemic viewing gets to watching light stream through celluloid.

“In the Mood for Love”: Rent the remastered version on virtual.filmlinc.org; also available in an unrestored version on the Criterion Channel or HBO Max.

“In the Mood for Love,” from 2000, is the first film in the retrospective, and you could hardly ask for a better introduction: The story — which stands alone but involves characters and motifs also featured in “Days of Being Wild” and “2046” — is his most accessible. There’s scarcely a wasted shot.

On the same day in 1962 in Hong Kong, a secretary named Mrs. Chan (Maggie Cheung) and a journalist named Mr. Chow (Tony Leung) move into rooms in adjacent apartments. They share these spaces with their busybody landlords, who are always a hovering presence. Mrs. Chan and Mr. Chow are both married, but not to each other. Their spouses, while heard, are never clearly seen. And the acts of kindness between them — Mrs. Chan has her husband buy Mr. Chow a rice cooker when he’s on business in Japan — begin to escalate beyond mere neighborliness.

Will Mr. Chow and Mrs. Chan have an affair? They might — but equally they might not. Throughout the film, Wong repeats scenes with different variations: Mr. Chan and Mrs. Chow encounter and just miss each other outside a noodle stall. When they discover their spouses are already cheating with each other — a revelation relayed in brilliant shorthand (Mr. Chow indicates that Mrs. Chan has a handbag like his wife’s; Mrs. Chan notices that he has a tie just like her husband’s) — they role-play, imagining and reimagining how the affair began.

Wong is less interested in settled incident than in keeping possibilities open. Nothing Mr. Chow and Mrs. Chan do is ever definitive, and their relationship, like Wong’s filmmaking, is based on steadily established rituals. (Nat King Cole continually croons on the soundtrack.) 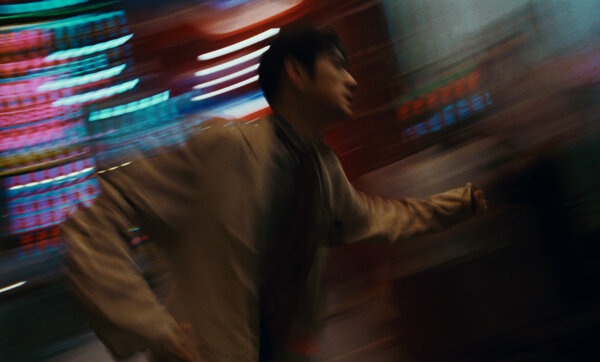 Wong’s use of space is crucial to establishing their bond. In the most touching interlude, Mrs. Chan gets stuck overnight in Mr. Chow’s room as others in the apartment play mahjong. (Even though the couple is innocent, they can’t be seen together, and so she cannot leave.) Mr. Chow, who wants to write martial-arts serials, eventually rents another room that may or may not become the site of their liaison. (The room happens to be numbered 2046, a year that has political significance for Hong Kong’s relationship with China. It’s not just the would-be lovers headed toward an uncertain future.)

The two characters perform actions simultaneously but separately, working late at night alone. At another point, the camera tracks across a wall to show them in parallel. Wong traces their missed connections, showing how they are always in each other’s thoughts, even as a life together eludes them. The photography, by Wong’s regular collaborator Christopher Doyle and Mark Lee Ping-bing, is simply among the most stunning uses of color in movies, and the ’60s Hong Kong atmosphere is alive with fluttering curtains, swirling cigarette smoke and atmospheric downpours.

In Wong’s oeuvre, this sense of thrilling instability extends even to the narratives themselves. Starting Dec. 4, you can catch the remastered version of “Chungking Express,” one of Wong’s breakout films, first shown in 1994. It begins as the noirish story of one recently dumped police officer, He Qiwu (Takeshi Kaneshiro), and continues as the far sunnier story of another, Cop 663 (Tony Leung). The two strands are connected by a takeout restaurant that teases the possibility of new love for each of them.

Again, repetition is key. The movie is famous (at least among cinephiles) for its mantralike uses of pop music, particularly the recurring plays of the Mamas and the Papas’ “California Dreamin’” and a cover of the Cranberries’ “Dreams” sung by the actress Faye Wong. The characters have elaborate routines: He Qiwu searches for cans of pineapple with an expiration date of May 1, because his ex, May, loved pineapple, and the date is also his birthday. Faye Wong’s character, who works at the restaurant, begins sneaking into Cop 663’s apartment. As in “In the Mood for Love,” Wong Kar-wai tiptoes around the possibility of romance. His characters navigate time, space and an electric visual palette in search of a fleeting, shared instant.