James Redford, a documentarian who drew on his own experience as a transplant recipient to create an institute devoted to educating people about such operations, and who with his father, the actor Robert Redford, founded the Redford Center, which examines environmental issues, died on Oct. 16 at his home in Fairfax, Calif. He was 58.

His wife, Kyle Redford, said the cause was cancer of the bile ducts.

Mr. Redford had primary sclerosing cholangitis, a disease that affects the bile ducts and damages the liver. In March 1993 he had a liver transplant, and later that year, after the first liver failed, he underwent a second transplant.

The experience led him to found the James Redford Institute for Transplant Awareness, which sought to increase knowledge about organ donation and other aspects of transplantation, primarily through filmmaking.

Among the films he initiated was “The Kindness of Strangers,” a 1999 documentary directed by his friend Maro Chermayeff that had its premiere at the Telluride Film Festival in 1998 and aired on HBO in 1999. It followed six families affected by transplants — two with donors, four with recipients. The film sought to show the human side of a subject that Mr. Redford, its executive producer, thought was often overlooked.

“When I came out of my experience and started to encounter, on a day-to-day basis, through television, film, radio and print, how organ donation was portrayed,” he told The Los Angeles Times in 1999, “I felt there was a lot of coverage of the controversies — which are there. And there was coverage of the medical-marvel element of it. But systematically, there seemed to be a failure on the human front.”

Renee Graham, reviewing the film in The Boston Globe when it played at the Boston Film Festival, wrote, “From the plight of the families to the hospital workers who ensure that the organs of a dead donor remain viable (the access the camera was allowed is remarkable), Chermayeff has made a poignant, intimate and unforgettable film about life and death.”

In 2005 Mr. Redford and his father established the nonprofit Redford Center, which also used film as a vehicle as it sought to promote environmental issues. He produced or directed a number of films for the center, including “Watershed” (2012), about the Colorado River, a subject especially dear to him, and “Happening: A Clean Energy Revolution” (2017).

The center, of which he was board chairman, also supports other filmmakers exploring environmental themes, including very young ones: An initiative Mr. Redford announced last year, Redford Center Stories, is aimed at getting students ages 10 to 14 to make films on environmental subjects.

Mr. Redford thought that the best way to impart information, whether on health or on clean air and climate change, was to humanize it.

“I come from a long line of storytellers,” he once said, “who see stories as a way to make sense of things.” 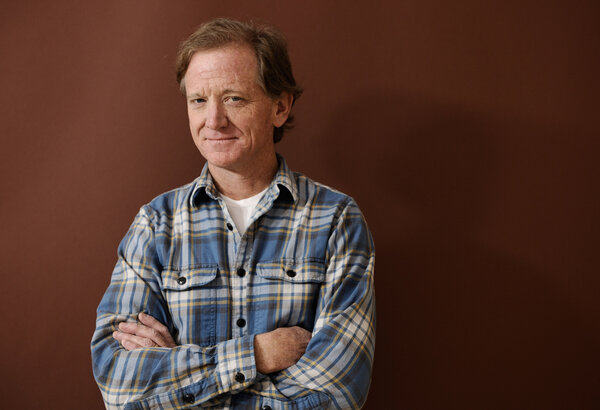 David James Redford was born on May 5, 1962, in New York to Mr. Redford and Lola Van Wagenen, a historian. He grew up in New York and spent summers in Utah, where his father had built a cabin in the Provo Canyon area, and where Jamie Redford acquired his environmental sensibility. His friend David Sheff said that some of the land had been overgrazed, and young Jamie took note of how that damage was reversed once the practice was stopped.

“It defined his future environmentalism when he saw, as he said, ‘that nature repairs itself if humans just get out of the way,’” Mr. Sheff said by email.

Mr. Redford earned a bachelor’s degree in creative writing and filmmaking at the University of Colorado in Boulder in 1985 and later received a master’s degree in English literature at Northwestern University in Evanston, Ill.

In addition to his work with the transplant organization and the Redford Center, Mr. Redford was a screenwriter, with credits that included “Cowboy Up,” a 2001 drama starring Kiefer Sutherland and Daryl Hannah. In 2012 he made a documentary called “The Big Picture: Rethinking Dyslexia.” Broadcast on HBO, it looked at the struggles that his son, Dylan, had with that condition and sought to correct mistaken impressions about dyslexic people.

In addition to his wife, whom he married in 1988, Mr. Redford is survived by his father and stepmother, Sibylle Szaggars; his mother and stepfather, George Burrill; his son; a daughter, Lena Redford; and two sisters, Shauna Redford Schlosser and Amy Redford.

Mr. Redford’s most recent project, which he was just completing at his death, was an episode of the PBS biographical series “American Masters” about the writer Amy Tan, whom he had met when she came to a screening of “The Kindness of Strangers.” One thing they had in common: Both were in rock bands. Ms. Tan was part of the Rock Bottom Remainders, a group made up of noted writers; Mr. Redford’s band, in which he played guitar, was called Olive and the Dirty Martinis.

In a Facebook post, Ms. Tan described working on the documentary with Mr. Redford, sharing with him box after box of documents, photographs, old VHS tapes and more related to her life.

“I treasure those days we dug through boxes containing my past,” she wrote, “when we spent hours in deep conversation about memory, mind and heart, the important matters that last.”