Jerome Hellman, who produced “Midnight Cowboy” (1969), the only X-rated film ever to win the best picture Academy Award, and who went on to solidify his reputation with other tough-minded dramas, like the Oscar-winning “Coming Home,” died on May 26 at his home in South Egremont, Mass., in the Berkshires. He was 92.

The death was confirmed by his wife, Elizabeth Empleton Hellman.

Almost no one at the 1970 Academy Awards ceremony expected “Midnight Cowboy” to win. The movie was the gritty urban story of Joe Buck (Jon Voight), a young, handsome, naïve and not particularly bright Texan who decides to start a new life in New York City as a male hustler catering to wealthy older women, and Ratso Rizzo (Dustin Hoffman), a grubby Bronx con man with a debilitating limp who becomes Joe’s unlikely ally.

Shot with an initial budget of only $1 million, the movie included straightforward but far from pornographic depictions of straight and gay sex, prostitution and gang rape. The film’s rating was later upgraded to R.

Vincent Canby’s review in The New York Times seemed hesitant to overpraise the film, which was based on James Leo Herlihy’s 1965 novel of the same name. It was “tough and good in important ways,” Mr. Canby wrote, “slick, brutal (but not brutalizing)” and “ultimately a moving experience.”

Mr. Hellman didn’t even bother to write an acceptance speech.

“I probably only said 10 words” after Elizabeth Taylor handed him the trophy, Mr. Hellman told The Los Angeles Times in 2005. “It must have been the shortest speech in the history of the Oscars.”

The other three — for best actor, best actress and best original screenplay — were for “Coming Home” (1978), an ambitious drama directed by Hal Ashby. Mr. Voight and Jane Fonda starred in the film, he as a paraplegic Vietnam War veteran with a social conscience, and she as a military wife who becomes his lover while her conservative straight-by-the-book husband is deployed in the same war. 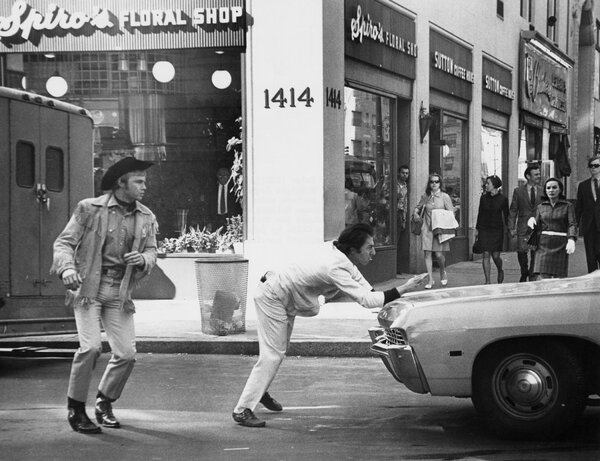 Between those two successes, “The Day of the Locust” (1975), also directed by Mr. Schlesinger, was another story altogether. Based on Nathanael West’s novel, set on the fringes of 1930s Hollywood, it was a depressing tale of a seductive but tainted promised land where some people came to fail and some to die. William Atherton, Donald Sutherland and Karen Black starred, respectively, as an Ivy League designer, a sexually repressed accountant and an untalented starlet.

Many critics found the film off-putting, and it did not do well at the box office. Pauline Kael of The New Yorker said it had “no emotional center.” Although Roger Ebert of The Chicago Sun-Times loved Mr. Sutherland’s performance, he found most of the characters too clearly doomed to care about.

But Mr. Canby wrote in The Times that the film was “in many ways remarkable,” declaring its subject a metaphor for the decline of Western civilization and “second-rateness as a way of life.”

Judith Crist, then the acclaimed founding movie critic for New York magazine, praised “The Day of the Locust” in a full-page review. “So brilliant is” this film, she began, “so dazzling and harrowing its impact, so impotent are the superlatives it evokes” that you almost want to avoid looking at it directly, like a solar eclipse. She concluded, “To call it the finest film of the past several years is to belittle it.”

The National Board of Review named it one of the year’s 10 best films.

Jerome Hellman was born on Sept. 4, 1928, in Manhattan, the second child of Abraham J. Hellman, a Romanian-born insurance broker, and Ethel (Greenstein) Hellman. After high school, he served two years in the Marine Corps, then began his working life as a messenger in the New York office of Ashley-Steiner, a talent agency.

He rose through the ranks and founded his own agency in 1957, before he was 30. But he sold that business in 1963 and became a full-time movie producer, beginning with George Roy Hill’s comedy “The World of Henry Orient” (1964). Peter Sellers played the title role, a New York concert pianist who is trying to initiate an affair with a married woman but is being stalked by two adoring adolescent girls. The film was both well reviewed and a hit.

His other films as producer were Irvin Kershner’s “A Fine Madness” (1966), starring Sean Connery as a poet with writer’s block, and “Promises in the Dark” (1979), starring Marsha Mason as a doctor treating a teenage cancer patient. It was the only film that Mr. Hellman ever directed, and only because Mr. Schlesinger, who was scheduled to do so, had dropped out.

Mr. Hellman’s last film was “The Mosquito Coast” (1986), directed by Peter Weir from Paul Theroux’s novel about an inventor who moves to a tropical island with his family, tries to create a utopia and fails. Harrison Ford starred.

Authors and commentators considered Mr. Hellman a driving force in the creation of what some called the New Hollywood of the 1970s, where power shifted from big-studio committees to independent filmmakers with purpose. But the era didn’t last long. In 1982, in an interview with The New York Times, he described the films he had made up to that point as “unique, different, fraught with risk, problematical.”

“People just can’t believe that after the success of ‘Coming Home,’ I couldn’t just do what I wanted,” Mr. Hellman observed. But the studios, he said, were now run by business types who needed every film to be a blockbuster.

“All that my success has won me is the luxury of immediate access to top executives,” he said.